With Unlock phase 1, Shibani Dandekar and Farhan Akhtar, who quarantined together finally headed to meet Farhan's parents, Javed Akhtar and Shabana Azmi for a lunch date. Video inside!

In every relationship, there comes a point when you decide to take it a step further and introduce your partner to your parents. It is one dreaded step as often we are concerned if we will be able to fit into the parameters set by our partner’s parents or not. It is the make or break moment as our mind is filled with questions and our heart cannot stop thumping out loud. However, we all have to face this. (Also Read: Karan Johar Was Not Happy With Alia Bhatt's Decision Of Marrying Ranbir Kapoor)

The Rock-on actor, Farhan Akhtar had found love for the second time in the model, VJ and actress, Shibani Dandekar, after ending his 17-year long marriage with a hairstylist, Adhuna Bhabani. Initially, Farhan and Shibani had kept their relationship a secret. However, later, they had made their relationship public, when Farhan had shared a picture, confessing his love on his Instagram handle. Since then, the couple has been sharing their cute mushy PDA moments and had spent their lockdown phase together, cooking and playing with their dog. 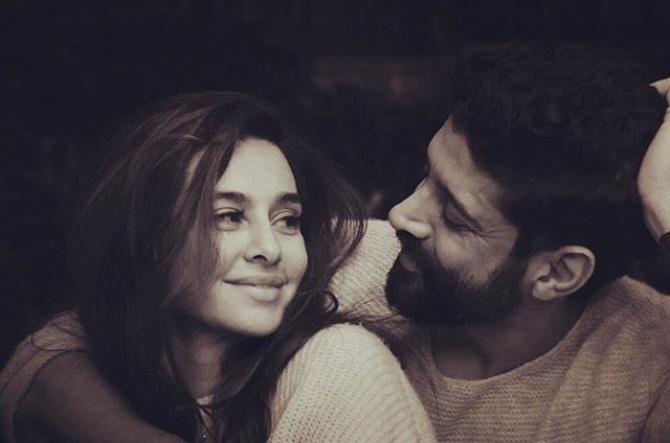 As the Unlock phase 1 has begun, many celebs are meeting their loved ones, and Farhan Akhtar, along with his lady love, Shibani Dandekar too took the opportunity to meet and catch up with his family. On June 21, 2020, Shabana Azmi took to her Instagram handle to share the video of meal fest organized by her and Javed ji. In the video, we can see Shabana ji cheering and celebrating the reunion of her family and friends as she shoots the video. We can see Shibani sitting right next to Farhan Akhtar, who can be seen sitting next to his father, Javed Akhtar. All the members on the table can be seen waving at the camera. Along with the video, Shabana ji wrote, “When with family its always about food!” Take a look at the video below:

This is not the first time that Shibani has been spotted with boyfriend, Farhan’s family. On January 15, 2020, an exhibition was organised for Javed ji’s 75th birthday and Shibani had attended the event with Farhan, Shabana Azmi, Zoya Akhtar and Javed Akhtar. Farhan had looked dapper in a purple-coloured kurta and white churidar and on the other hand, Shibani had opted for a white-coloured dress with colourful detailing. (Don't Miss: Trishala Dutt Pens A Father's Day Wish For 'Papa Dukes', Sanjay Dutt, Step-Mom, Maanayata Sends Love) Speaking to the Mid-Day, Shibani Dandekar had opened up about her relationship with Farhan Akhtar. She was quoted as saying, “We are public figures, so people are entitled to say what they want to. But I don't care about their opinion. I'm aware of who I am and I'm comfortable with who I choose to date. I am not secretive, but I don't feel the need to say things out loud. It's up to me to decide when and what I want to share about my personal life, and it is up to the audience to decide how they look at it. How much information I want to put out in the public domain is my prerogative.” (Recommended Read: Taimur Ali Khan Adorably Looks At 'Abba', Saif Ali Khan In This Candid Father's Day Picture)