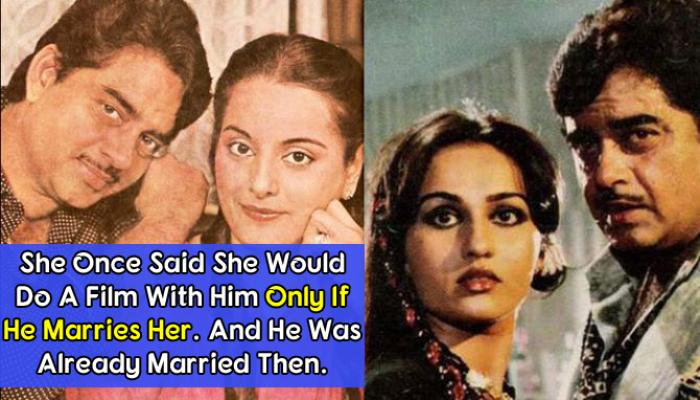 Love is an unpredictable, untameable and an unforgiving territory. And when you’re in an industry that is surrounded by glamour and glitz, there is no easy way for you to escape the sparks. Known for his unconventional looks and impeccable acting talent, the leading man of the 70s and 80s, Shatrughan Sinha’s life was no different.

Though we have all heard and read the tales of Sinha’s closeness with many well-known beauties, there were two women who continued hitting the headlines for their proximity with the star – Poonam Chandiramani (now his wife) and Reena Roy. Let’s take a look at Shatrughan Sinha’s controversial love-life. 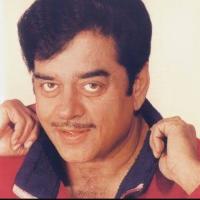 Being the youngest of the four brothers, Sinha always remained the most pampered one. Naturally, when he expressed his desire to be a part of the showbiz industry, he received complete support from his family. After passing out of FTII (Pune) and a short-lived period of struggle for work, Shatrughan successfully managed to carve a path for himself in the industry. With back-to-back hits and some unforgettable roles, Shatrughan Sinha gave Hindi cinema the direction and credit it always needed.

Don't Miss: Here's Why Vatsal-Ishita's Love Is Being Compared To Legendary Love Story Of Sunil Dutt And Nargis Shotgun Sinha’s love affair with Poonam Chandiramani was nothing less than a bestseller. Just like a Bollywood film’s plot, Shatrughan fell for Poonam the first time he saw her travelling on the same train as him. For reasons unknown, Poonam had started crying after the train had started and our lover boy went over to work his charm on her. Shatrughan wrote down, “Itni sundar ladki ko rona shobha nahi deta,” on a magazine and gave it to her.

But, unimpressed by his gesture, Poonam threw away the magazine. Nevertheless, as fate would have it, the two soon became friends and it did not take too long for their friendship to turn into something more meaningful. After being crowned ‘Miss Young India’, Poonam and Shatrughan both forayed into movies. As love blossomed between the couple, Poonam’s mother got the whiff of their growing intimacy and started accompanying her everywhere. Even when the couple signed a film together, Poonam’s mother started visiting her sets to shoo away prying eyes (mostly of Sinha’s).

Suggested Read: Love Story Of Bollywood Legend Anil Kapoor And His Wife Sunita Will Make You Believe In True Love

Poonam and Shatrughan’s love-life took a serious jolt when Shatru starred with an 18-year-old Reena Roy in his most successful film, ‘Kalicharan’. Despite being in a relationship with Poonam, Sinha could not help but fall in love with Reena Roy, who too was enamoured by his larger-than-life persona. No matter how hushed they tried to keep their affair, the news of their affair became showbiz’s worst kept secrets. Poonam, too, came to know about their off-screen intimacy but she maintained a stoic silence over it.

After almost five years of being in love with both the actresses, Shatrughan finally decided to marry Poonam. Though the duo got married in a lavish ceremony in 1980, the passionate affair between Reena and Sinha was nowhere near over. The stories of their hidden meetings and date nights kept making the rounds, but Poonam never discussed her grief or heartbreak publicly.

Dilemma of marriage and calling it quits

It was after 1983 that the equation between the two started getting turbulent. Unable to deal with being the ‘other woman’ in Sinha’s life, Reena Roy decided to throw an ultimatum at him. When Pahlaj Nihalani came up with a script for the two, Roy informed him that she would only sign the project if Shatrughan Sinha would agree to marry her. Fearing the worst, Nihalani passed on the message to his close friend Shatrughan, who begged Reena to continue the relationship. However, having been an emotional roller coaster ride, she decided to call it quits right then and there.

When he decided to realise to turn the chapter and move on with his life, Poonam Sinha welcomed him back to herself and her family with open arms. Her patience, perseverance and the honesty in her love for Shatru made him call her the ‘Backbone of his Life’. Now, decades later, the whole ‘Reena Roy affair saga’ has become a thing of the past for Poonam and Shatrughan Sinha, who cherish and value their bond and their three children- Sonakshi Sinha, Luv Sinha and Kush Sinha. 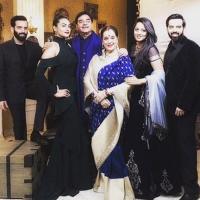 So, here we’re! These were Shatrughan Sinha’s two most controversial love affairs and stories. What do you think of this story? Do let us know in the comments section below.

Next Read: When Royal Met Regal: Everything You Need To Know About Saif And Kareena's Love Story