On legendary actor, Shashi Kapoor's 83rd birth anniversary, his doting daughter, Sanjana Kapoor and granddaughter, Shaira Kapoor shared some unseen pictures with him from their respective memory lane. The massive fanbase of the iconic actor has already taken over the internet, as all social media platforms are filled with the pictures and videos of Shashi ji's movies. There's no denyin the fact that Shashi ji is still regarded as one of the most loved actors of all-time. On top of that, the charismatic and four National Film Awards winner, late Shashi ji's contribution to Indian cinema is simply uncountable and priceless. (Recommended Read: Anushka Sharma And Virat Kohli's Two-Month-Old Daughter, Vamika Gets Her Own Nameplate In Ahmedabad)

The late legendary actor, Shashi Kapoor had acted in more than 174 films in his illustrious career spanning six decades. During his lifetime, the handsome actor had also worked in some English films as the lead hero. For the unversed, Shashi ji had made his debut in Indian cinema as a child artist in his brother, Raj Kapoor's directorial debut film, Aag in 1948, and it was in 1961 when he had made his full-fledged debut in Yash Chopra's movie, Dharamputra. Since then, there was no looking back for him, and the young and dynamic actor had gone on to succeed the legacy of his father and brothers in Indian cinema. 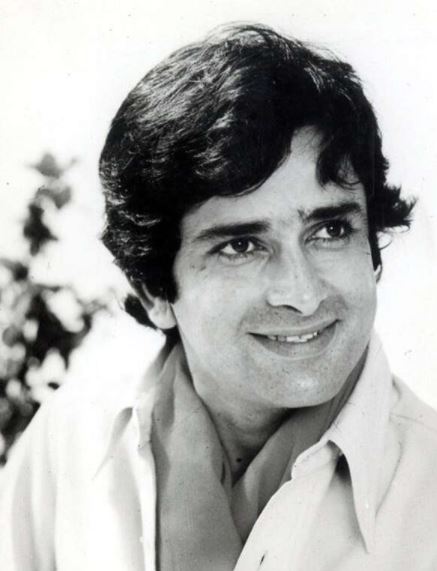 On March 18, 2021, late legendary actor, Shashi Kapoor's daughter, Sanjana Kapoor took to her Instagram handle and shared a beautiful never-seen-before picture with him on his birth anniversary. In the picture, the doting daughter can be seen standing behind her dearest daddy, as the two posed for the camera with their brightest smiles. While on one side, Shashi ji looked healthy and handsome as always in his white kurta-pyjama. On the other side, his daughter, Sanjana donned a beautifully printed suit and twinned in white with her dad. Along with the rare picture, the doting daughter penned no caption, and it seems justified, as the stunning sepia-coloured picture brings back all the beautiful memories from their memory lane. After some moments, late Shashi Kapoor's elder son, Kunal Kapoor and his ex-wife, Sheena Sippy's daughter, Shaira Kapoor took to her Instagram stories and shared some unseen pictures of her grandfather on this special day. In the first picture, we can spot little Shaira along with a girl holding Shashi ji's hand, as all three of them posed for the camera with their adorable smiles. The doting granddaughter wrote, "Happy Birthday" atop it. The second picture is a solo one of the iconic actor from his younger days and takes us back in time when he was ruling the silver screens with his incredible films in the 80s. Atop the classy picture, Shaira wrote, "Miss You". Take a look: (Don't Miss: Adhyayan Suman Recalls Turning Into An Alcoholic Post His Breakup 8 Years Ago, Developed Anxiety Too) 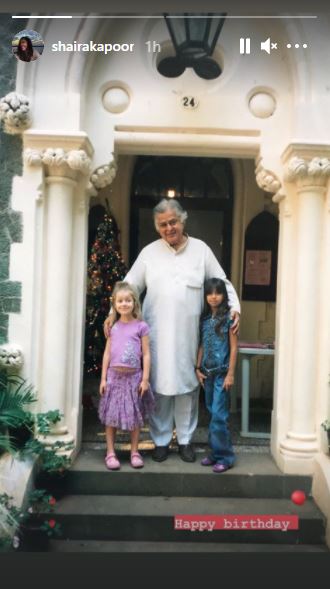 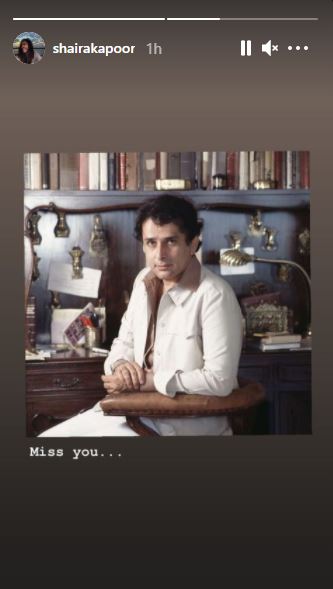 For the unversed, late Shashi Kapoor's son, Kunal Kapoor had gotten married to iconic producer, Ramesh Sippy's daughter, Sheena Sippy, and the duo had welcomed two kids, Shaira and Zahan Prithiviraj Kapoor. However, after some years, because of some non-negotiable differences, the two had gotten divorced. Over the years, we have seen Shaira sharing rare pictures with her late grandfather on her Instagram handle. For instance, on Shashi ji's 82nd birth anniversary, Shaira had taken to her IG handle and had shared some priceless pictures with him. Along with the beautiful pictures, Shaira had written, "Happy Birthday Dadaji! Love you always." (Also Read: Did Kiara Advani Confirm Her Relationship With Alleged Beau Sidharth Malhotra? Reveals Details) You'll always be in our memories Shashi ji!