Playback singer, Shalmali Kholgade revealed how she and her husband, Farhan Shaikh got the idea to add a personal touch to their wedding bands during a trip to Japan.

Every now and then, whenever we refresh our social media feeds, we see a celebrity getting married. One such popular name from showbiz, who had surprised her fans with the news of her wedding was Bollywood singer, Shalmali Kholgade. The super talented singer got hitched to her long-time beau, Farhan Shaikh, in an intimate ceremony on November 22, 2021.

For the unversed, Shalmali had dated Farhan for a long time before tying the knot at her house in the attendance of her close family members and friends. The couple is reported to be hosting a grand reception at a five-star hotel in Mumbai. Before that, in a recent interview, Shalmali Kholgade opened up about her relationship with Farhan Shaikh and how the first week of her marital life has been treating her.

In an interview with Mid-Day, Shalmali Kholgade spilt the beans on the fact that the global pandemic was not the reason that she and Farhan opted for an intimate ceremony, rather they always wanted a wedding like this. The newly married singer said:

“The ceremony was exactly how Farhan and I had dreamt of, for as long as we can remember. We had only family and friends in attendance, about 15 people, all of whom could fit in the living room. People thought the low-key wedding was because of the new variant [of the virus], but this is how we always wanted it.”

Going further in the interview, Shalmali took a walk down the memory lane as she recalled her and Farhan's trip to Japan in 2017, where they had attended a ring-making workshop. It was then that the duo had decided that if they take their relationship to the next level, then they would pass off those weddings bands that they had made at the workshop as their wedding rings. She explained:

Shalmali Kholgade also talked about her life after marriage and shared that she has been living with Farhan Shaikh for six years now. Therefore, nothing feels different even after getting married. However, she revealed that life after her marriage is treating her right as “being married to someone who knows every mood of mine is special.”

Talking about Shalmali Kholgade and Farhan Shaikh's wedding, the couple had looked gorgeous as they had twinned in their coordinated wedding couture. Shalmali had worn an orange-beige colour printed saree with a white halter neck blouse and had paired it with a set of silver jhumkas. She had completed her look with minimal makeup and had pulled her hair in a bun, and had decorated it with gajra. On the other hand, Farhan had looked dapper in his orange kurta pyjama set.

Also Read: Jaya Bachchan Complains About Husband, Amitabh Bachchan, It Is Every Married Couple Ever 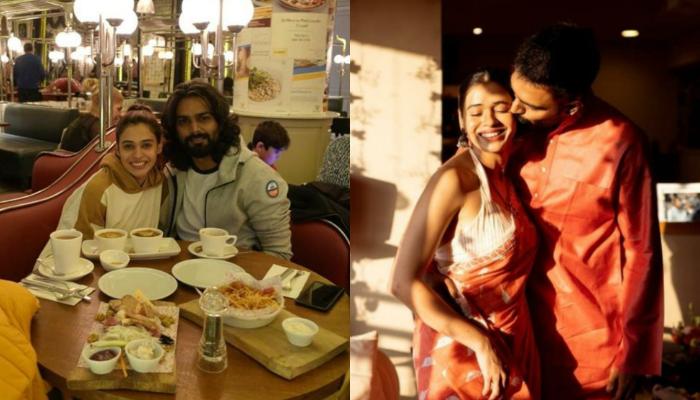 Refresh your social media platforms every five minutes, and someone is getting married! Because it is the wedding season, we can't help but think who will be the next in the line! We always see gala wedding affairs when it comes to celebrities, but there are a few celeb couples