Shaheer Sheikh is currently enjoying his mini-honeymoon with his wifey, Ruchikaa Kapoor and their snow-filled glimpses are breathtakingly gorgeous!

For every couple, post-wedding, the most exciting part is their honeymoon. They plan for this trip since they start planning for their wedding festivities as it comes as a detox from all the wedding stress and allows you to spend some quality time with your partner. It is like being lost in the embrace of your partner, away from all the hullabaloo of life. Well, the pandemic has certainly destroyed the fun of honeymoon for couples, yet everyone is finding their own way to enjoy with their partner. TV heartthrob, Shaheer Sheikh is currently enjoying his mini-honeymoon with his wifey, Ruchikaa Kapoor and we are loving it. (Also Read: Hardik Pandya Turns Santa Claus For His Son, Agastya's First Christmas Celebration [Pictures Inside])

It was after the wedding news of Ruchikaa and Shaheer hitting the headlines that the couple had announced it on their respective IG handles on November 27, 2020. Ruchikaa had taken to her IG handle and had shared a cute picture with her husband. In the picture, the newlyweds could be seen laughing and had looked very much in love. While Ruchikaa had donned a blue suit, the handsome groom had sported a white kurta-pyjama and had perfectly complimented his bride. Ruchikaa had captioned the picture as "Off on an adventure called Forever. #HappilyEverAfter #ForeverPerson #Ikigai #theGirlwithcurls #MadMeNow." Shaheer Sheikh had also posted a beautiful picture with his wifey, Ruchikaa Kapoor and had written, "Zindagi khatm bhi ho jaaye agar... Na kabhi khatm ho ulfat ka safar. #chaloDildarChalo. #ikigai." Now, the couple is in each other’s embrace amidst the snow-filled hills and we are loving their snippets. 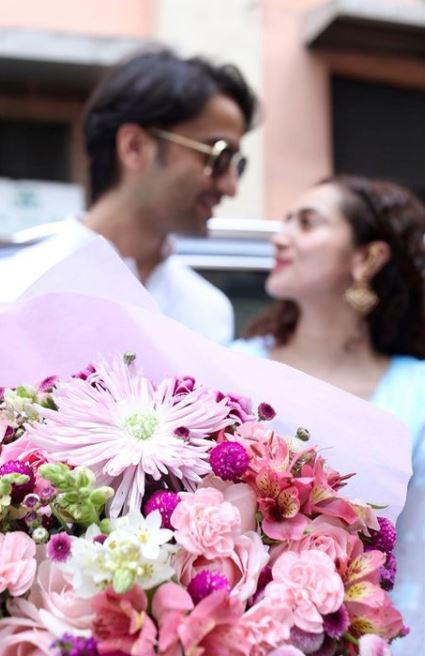 Taking to his IG handle of December 25, 2020, Shaheer Sheikh shared a Reel of his wife, Ruchikaa Kapoor enjoying the snow. In the video, Ruchikaa can be seen happily kicking and along with it, Shaheer added the Christmas song to it. Ruchikaa can be seen wearing a pink suit with a nehru jacket, a bomber jacket and stole, indicating that the place must be freezing cold. Take a look:

Not just this, Ruchikaa had also shared a picture with Shaheer on her IG handle, where Shaheer could be seen driving his car on the snow-covered roads, with his wifey sitting by his side. Along with it, Ruchikaa had written, “Who cares where we’re going... when we’re going there together @shaheernsheikh #ForeverPerson #LifeLine #JourneyOn #TheGirlWithCurls." Before Ruchikaa, it was Shaheer, who had shared a video, where we could see him perfectly driving on the snow-covered roads, Ruchikaa sitting by his side and someone recording it. Take a look: In an interview with Pinkvilla, when Shaheer was asked when he had realised that Ruchikaa was the one destined for him, the actor had replied with the details of his love story. In his words, “So, we travelled together. Generally, you feel like you can go mad, you can have fun, only when your friends are there, not with your partner. You think of fun, you think of your friends. But, even if we go to a hospital for a regular check-up we are crazy together, we are crazy together. So I felt like this is the right combination, I can be myself and I can have fun.” (Don't Miss: Malaika Arora And Amrita Arora's Entire Family Twinned Their Night Suits For The Christmas Party) Shaheer had also revealed how he can be himself in front of Ruchikaa and can express his emotions freely. Talking about how she understands him, he had stated, “People who know me, know the kind of person I am. For the world, I'm this person who keeps to himself and keeps quiet and someone who doesn’t really express. But, people who know, me who are good friends, know I am a mad man. I am a person driven by my emotions so I go crazy sometimes. So I can be that in front of her, I can be myself. During those trips, I realized yes, this is it. It felt perfect.” (Recommended Read: Pregger, Kareena Kapoor Khan Twins With Future 'Bhabhi', Alia Bhatt For Kapoors' Christmas Lunch)