Too much is read, seen and talked about the religion in India. But somehow, it never seems to be enough. While many Bollywood films give us a glimpse of the dark side of religion, some celebrities in real life address such issues. But mostly they are being targeted with the trolling and hatred. In India, be it any festival, the celebrations aren’t just limited to the related community and transcend religion. Such is the case with the widely popular ten-day festival of Ganesh Chaturthi. (Also Read: 11 Reasons Why 'King Khan' Shah Rukh Khan Makes One Of The Best Celeb Fathers From Bollywood)

B-town’s King Khan, Shah Rukh Khan is known to celebrate festivals with equal faith and enthusiasm, be it Diwali, Janmashtami, Eid or Ganesh Chaturthi. And he is teaching his children – Aryan Khan, Suhana Khan and AbRam Khan the same. On September 16, 2018, Shah Rukh shared a picture of AbRam seeking blessings from Ganpati ‘Pappa’ on his social media handles, and captioned it, “Our Ganpati ‘Pappa’ is home, as the lil one calls him.” 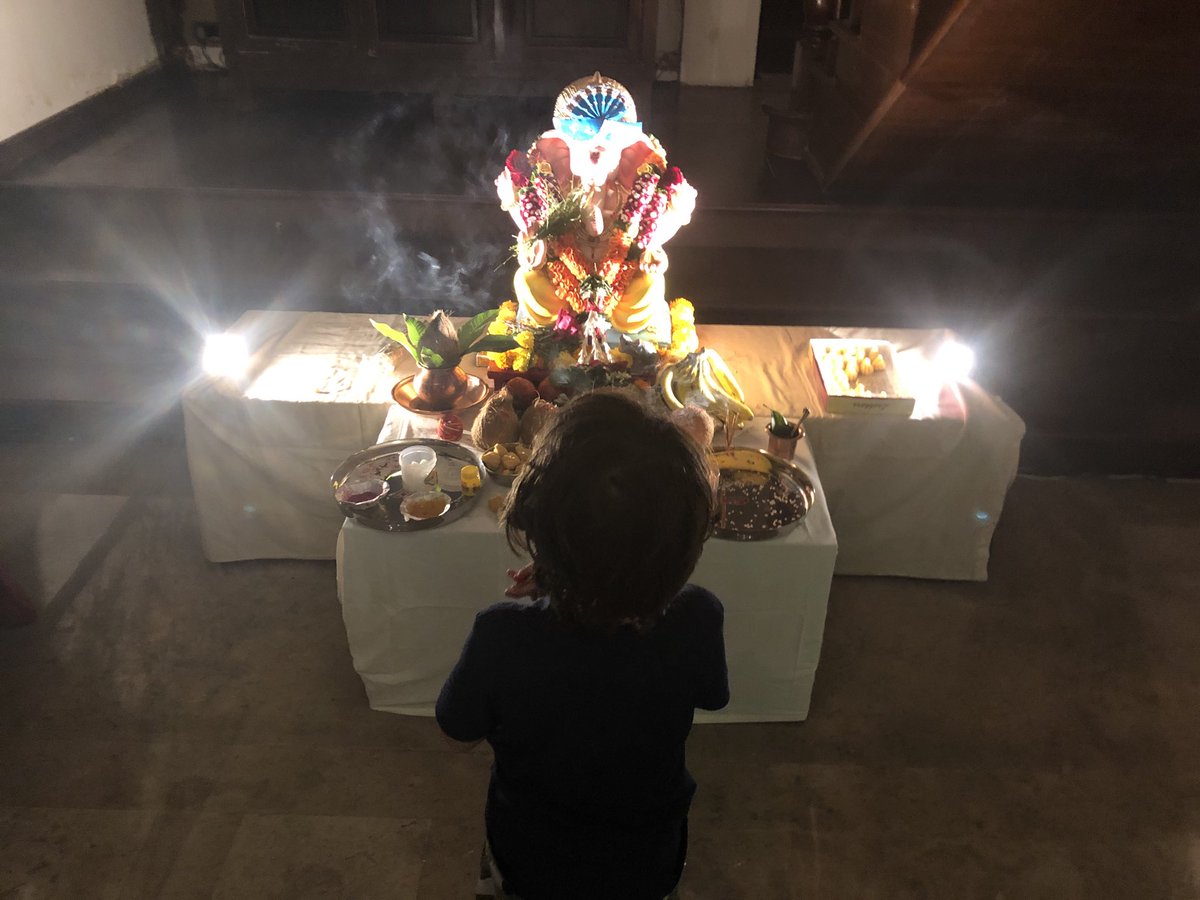 Needless to mention, this photo of AbRam went viral in no time and was loved by almost everyone. Why do we say ‘almost’? Well, some religious fanatics on social media criticised the Zero actor for preaching his son to worship a Hindu God, despite being a Muslim. One of the comments could be read as, “Sir me aapka bot bada fan hoon but usse pehle me Muslim hoon sir aap har interview me kehte ho I m proud to be good Muslim holly Quran me kaha gaya hai that respect every religion but Allah Ke saath kisi ko comprare mat karo ye sabse bada gunah hai..” Take a look at other comments: 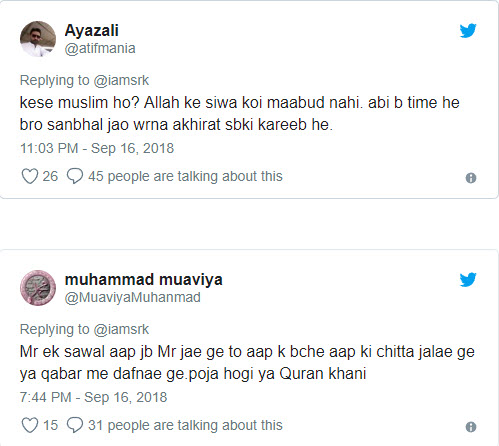 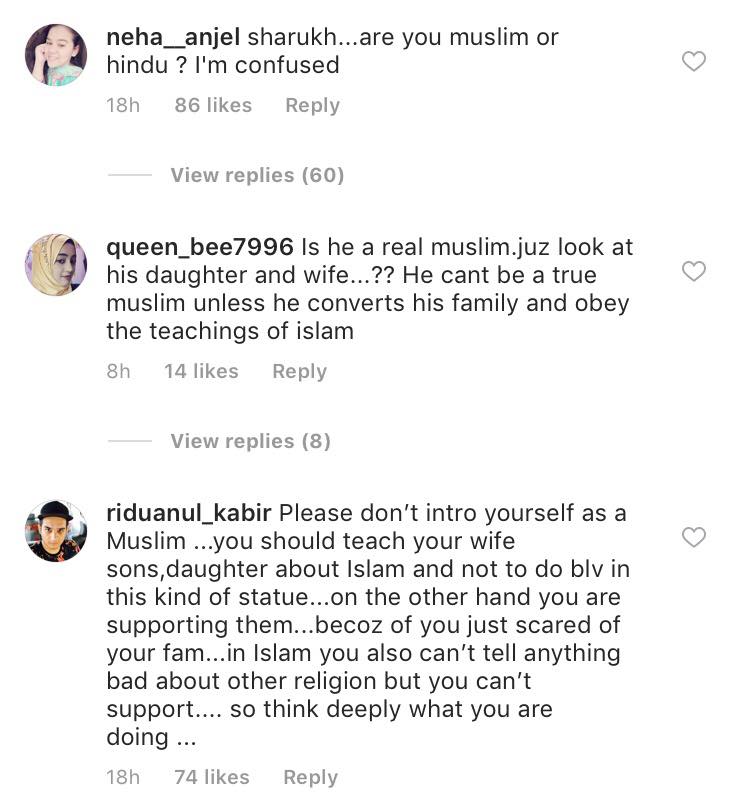 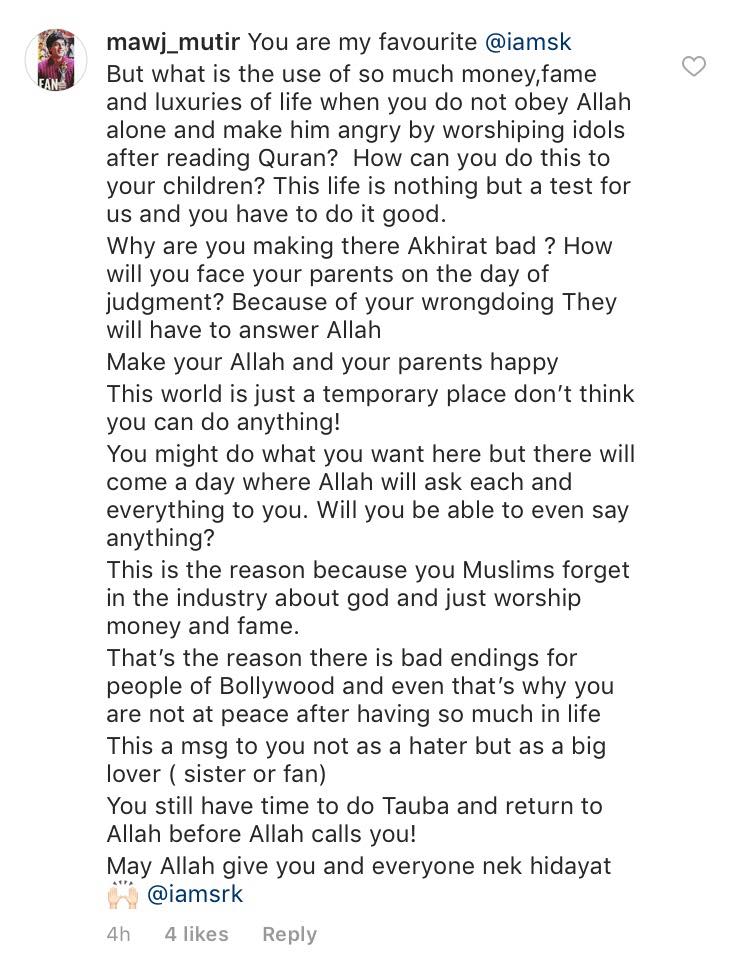 Shah Rukh Khan has always been vocal about secularism and had shared that he would want his children to love and respect all religions. He was quoted as saying, “I truly believe traditions and religions are all very personal. I think children, grown-ups should be left to learn it themselves.” Reminiscing his growing-up days, Shah Rukh had said, “My parents introduced me to everything. It was a refugee colony where I lived. So my parents used to be equally happy if I used to go to Ramleela or for Eid celebrations. That ways, you learn and respect and love each other because you learn each other’s religion on your own. So, I hope my children do the same. My memories and my thinking is this for them!” (Also Read: Shah Rukh Khan And His Son AbRam Khan Break Dahi-Handi On Janmashtami, Video Inside) 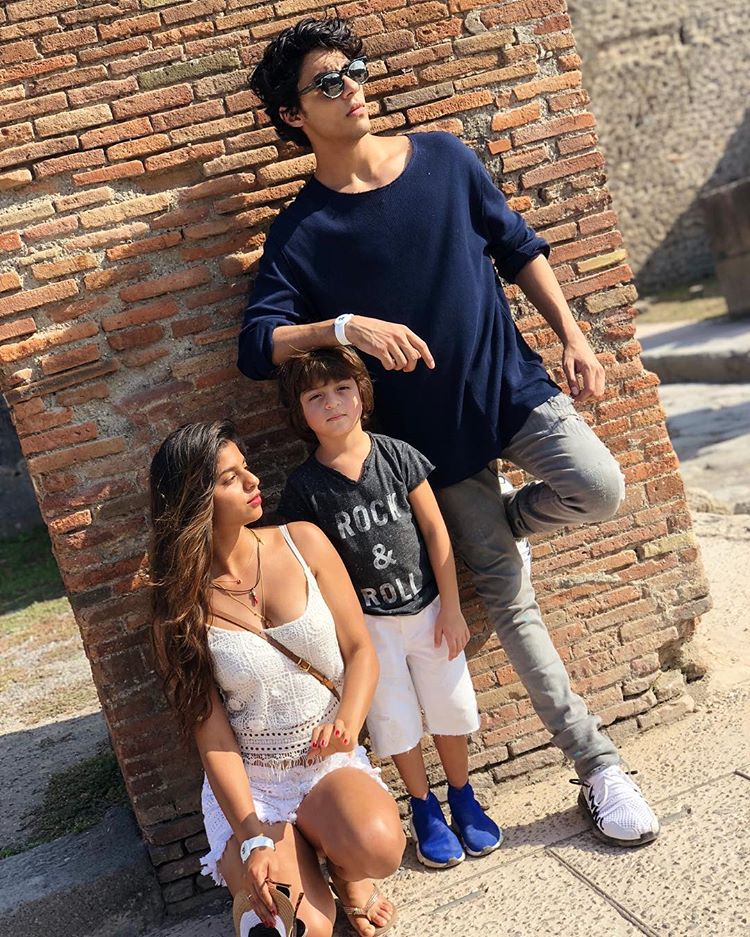 Shah Rukh also mentioned in the same interview that he reads Mahabharata stories to AbRam. The Dear Zindagi actor shared, “I am reading Mahabharata and I tell the stories to AbRam. I think those are the greatest stories that have been told ever. I want my kids to learn about religion themselves. Similarly, the stories and anecdotes I know about Islam, I share those with my kids too. But I tell them as stories and I hope they learn and respect all the religions on their own and enjoy the fact that their traditions and their beauty need to be respected.” 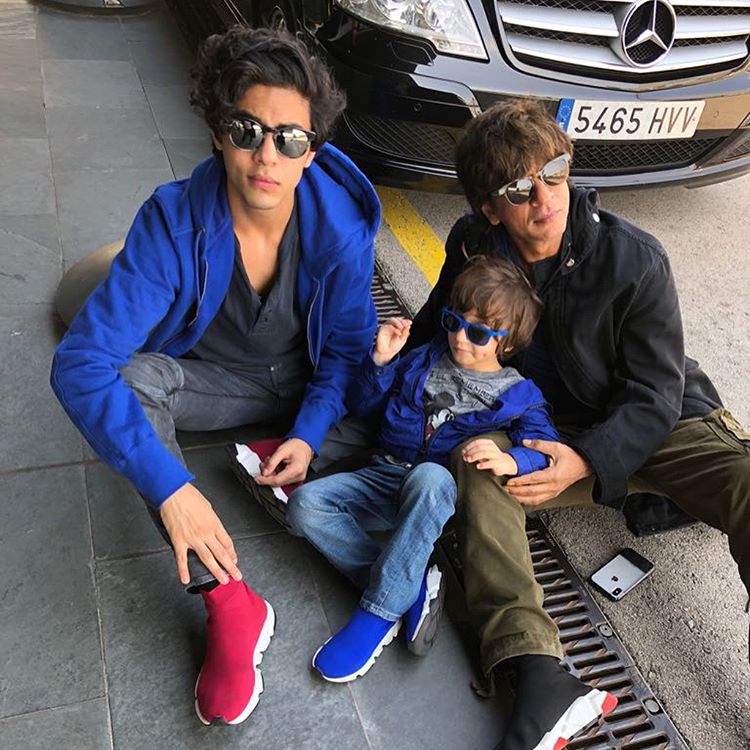 In another recent Instagram post, Shah Rukh Khan shared that he was feeling like a parent philosopher. He posted an image on which it was written, “Our children are not our responsibility. They are a measure of our capability. When someone says, ‘my kid is such a problem’, I want to tell them that don’t look at them as that, cos actually their ‘issues’ are a call to our potential…a source of telling us to we can exceed our energies more than we know. Our children are our capability, not responsibility”, and he captioned it as, “Sunday afternoon...for no apparent reason...feel like being a Parent Philosopher. This is to thank the kids not to give advice to parents”. (Also Read: Shah Rukh Khan's Deep Insights On Parenthood, Says Our Children Are Not Our Responsibility) Shah Rukh Khan has set an example by celebrating festivals, irrespective of its culture and religion, and his actions have time and again proved that humanity is above all religions. We truly admire you for that, Shah Rukh!