If daughters are made up off a little bit sugar and lots of spice, then we are sure baby boys are definitely made up off a little bit of mom’s heart and a lot of dad’s mischief. And Bollywood superstar Shah Rukh Khan tiny tot, AbRam Khan who was the first favourite kid of paparazzi’s grew up to be. Confused? Scroll down to know what we are talking about! (Recommend Read: Karan Johar Dedicates This Song To Alia Bhatt And Ranbir Kapoor, You Would Be Left Wondering Why)

Shah Rukh Khan youngest son, AbRam is now a big boy. From being the darling of the media, he went on to become wary of them. It looks like as if the little boy doesn’t want them to click their pictures at all. On December 25, 2018, AbRam was spotted on his way to Salman Khan’s Christmas party and he did something hilarious to keep the paparazzi’s away. The star kid started making funny faces at the shutterbugs.

At first, he was busy doing his own thing and look adorable in the red sweater but when he spotted the paps, without a smile or a wave, he straight away started making faces at the photographers. And it definitely left all the paparazzi in splits. Well, in a recent interview Shah Rukh had revealed how his elder son, Aryan don’t want to follow his suit but looks like his younger child will make his dream come true. (Also Read: Karan Johar Reveals Whom Is Salman Khan Going To Marry In 2019 On Neha Dhupia's Show No Filter Neha)

This isn’t the first time AbRam did something like that, earlier, at Aaradhya Bachchan’s birthday bash, he did something like this. When he returned from the awesome party, we saw an attendant carrying AbRam on his lap and shutterbugs being shutterbugs were trying to get a glimpse of their favourite boy. However, AbRam clearly looked in no mood to get clicked and hence he loudly said, “No pictures” to the photographers clicking him.  Take a look at the video:

A few days ago, Gauri Khan took to Instagram to share Christmas cheers with her fans and friends. She posted a cute picture of Shah Rukh Khan with his little boy of wonders, AbRam recreating his iconic ‘King Khan’ pose. And we love how AbRam totally aced it! Take a look: 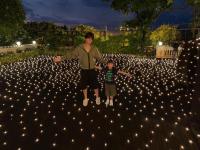 Do you know AbRam thinks that Amitabh Bachchan is Shah Rukh Khan’s father? Yes, a recent picture shared by Amitabh Bachchan had him, daughter Shweta Bachchan Nanda and little AbRam shaking his hand with his ‘grandfather’! Sharing the picture, Big B captioned the picture as, “and this be little Abram, ShahRukh’s little one .. who thinks , believes and is convinced beyond any doubt, that I am his Fathers FATHER .. and wonders why Shahrukh’s father does not stay with him !!!” AbRam’s mommy, Gauri Khan too, reposted the same picture and captioned it as, “Couldn’t resist reposting this image.” SRK commented on the picture and invited Sr. Bachchan to play ‘Doodle Jump’ with AbRam. His comment could be read as, “Sir Aaya Karo na! Please stay at home with AbRam on Saturdays atleast.. He has some really amazing games on his ipad...u can doodle jump with him!” (You May Also Like: Anushka Sharma Quietly Flies To Australia To Be With Virat Leaving Katrina's Christmas Party Midway)

In another recent interview, Shah Rukh Khan revealed that he doesn't really have a favourite child, he stated, "I am equal with my children. Aryan was the first child, Suhana is most special because she is a girl and AbRam is the youngest so everybody loves him. I can't decide. I have a dude son, a pretty lady and a little gangster. I love them all and it is nice to spend time with them." Just like you, even our favourite pass time is scrolling through social media and get our hands upon any juicy gossip or interesting old interviews to bring to you. We have brought to you one such hilarious conversation that had taken place a while ago. When superstar, Shah Rukh Khan had