Raksha Bandhan in India is one of the loveliest and widely celebrated festivals, where a lot of sentiments are involved. And our Bollywood celebs are no exception! Talk of love, care, sentiments and what not, our celebs depict it all. Just like many others who were busy celebrating and spending time with their families, King Khan, Shah Rukh Khan and his family too, made the best of the day. But what grabbed all the attention was the inspiring caption he put along with the snaps he shared of Raksha Bandhan celebrations. (Also Check: Arjun Kapoor Trolls Janhvi Kapoor, In Desperate Need Of Rakhi Pic To Show 'Sista Luv') 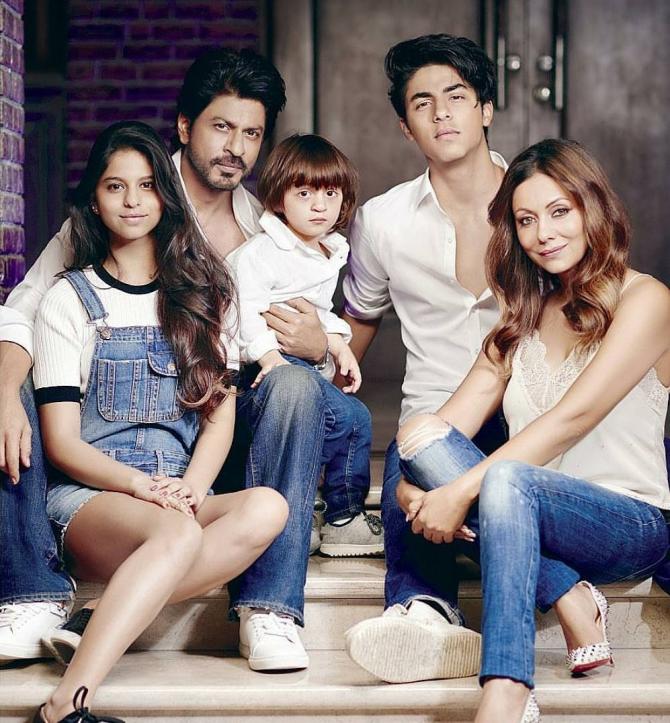 The Badshah of Bollywood, Shah Rukh Khan took to his official Twitter account and shared some glimpses of their rakhi celebrations. As usual, whenever Shah Rukh shares something, it is always with a social message. Yet again, this Raksha Bandhan, Shah Rukh Khan not only shared a lovely picture of Suhana and AbRam, but a message for all as well. Along with the snap, he wrote, “Raakhi done…with a promise in the family to respect all women. Respect for women will make u inspired, make u tender hearted & morally strong. Happy Raakhi to all ye bros out there…& respect to all sisters.” Here’s the snap: 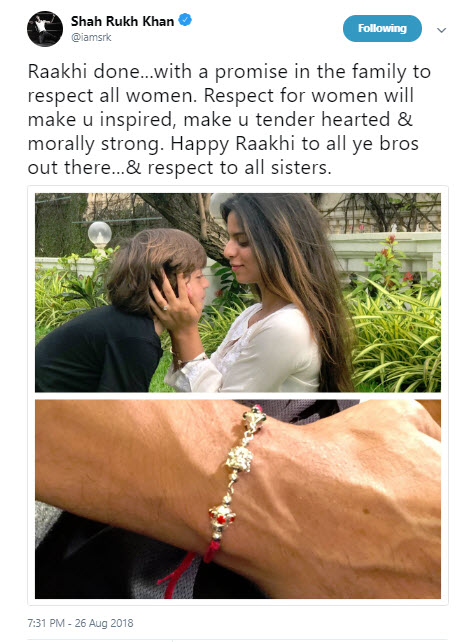 Isn’t the caption so inspiring? If you are wondering whose arm is this, it is probably, Aryan’s hand. This is not the first time that Shah Rukh Khan has put forth his thoughts. In fact, on Independence Day i.e. August 15, 2018, took to his social media and shared his thoughts. He celebrated the day with AbRam and wrote, “‘Tum hi Bhavishya ho mere Bharat Vishal ke, Iss Desh ko rakhna mere bachhon sambhaal ke…’ Happy Independence Day to all. Celebrating at home with our future generation of gentle, kind & pure Indians.” (You May Also Like: Neha Dhupia's First Birthday As 'Missus' And 'Mommy-To-Be', Hubby Angad Bedi Posts A Heartfelt Wish) Sometime back only, Suhana was in the news for her amazing and stunning maiden interview and magazine shoot for Vogue India's August 2018 issue. Talking about the cover, he said, "I hope it is not taken as an entitlement because she happens to be Shah Rukh Khan's daughter but I hope it is seen as a responsibility that Suhana now has.” He further added, "And I think this is going to remove some of the entitlement she has because she happens to be my daughter. Insha Allah (God willing), she will work hard towards it." 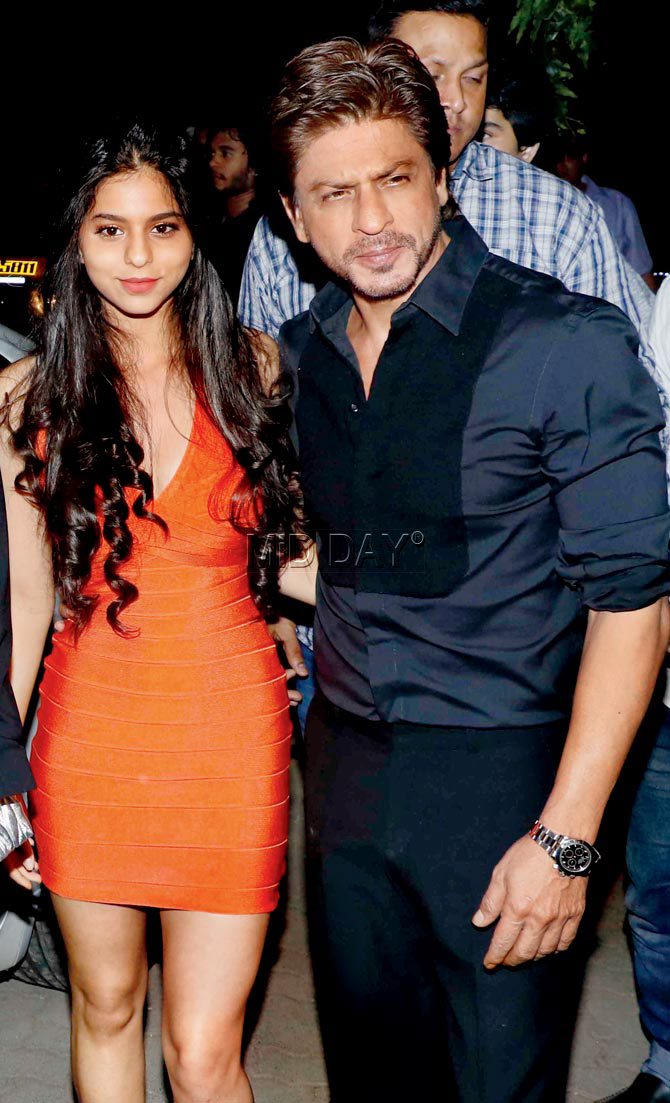 In another interview, Shah Rukh Khan was quoted as saying, "She is 18, she is lovely, sensitive, sweet and extremely shy but also extremely strong. And I just want to thank you all who were behind all this and for making her look so nice. I will be proud of her when she is proud of herself and the job that she does and Insha Allah, she will do that.” (Don't Miss: Taimur Ali Khan's 'Rakhi' Celebrations With Step-Siblings Sara, Ibrahim And Cousin Inaaya) Unveiling the cover of the magazine, the doting daddy wrote, "Holding her in my arms again thanks to Vogue. ‘What imperfect carriers of love we are...' except when it comes to our children. So, sending you all my love and a big hug.” (Suggested Read: Mihika Varma Shares First Picture Of Her Four-Month-Old Son, Co-Star Neena Kulkarni Reveals His Name)

On the work front, SRK is these days lined up with the post-production work of his film Zero, which is directed by Aanand L Rai. In the movie, he will be seen playing the role of a vertically challenged man. The film is slated to be released on December 21, 2018, and the team will launch the trailer on his birthday in November.