Shah Rukh Khan Asks Wife Gauri Khan To Design His Office, Her Witty Reply Will Leave You In Splits

Shah Rukh Khan Asks Wife Gauri Khan To Design His Office, Her Witty Reply Will Leave You In Splits

When we talk about power couples in B-town, the list definitely has to start with Shah Rukh Khan and Gauri Khan. Married for close to three decades now, Shah Rukh and Gauri continue to inspire everyone with their rock-solid relationship and are the most admirable couple of Bollywood. Who would have thought that a rejected dance proposal would eventually lead to a lifetime of togetherness? Though the road to marriage wasn’t a cakewalk for the lovebirds, nothing was big enough to stop them from getting married. (Also Read: Shah Rukh Shares How Newly Married Gauri Used To Be By His Side During His Struggling Days In Bombay)

Shah Rukh and Gauri’s relationship is only getting stronger with each passing year. Following the footsteps of his fellow industry couples, Priyanka Chopra-Nick Jonas, Deepika Padukone-Ranveer Singh and Virat Kohli-Anushka Sharma, Shah Rukh and Gauri too indulged into an adorable Instagram banter. A high-end interior designer, Gauri recently shared a picture of her latest work on social media, wherein she has designed a stunning store for a cosmetic brand, Bollyglow. 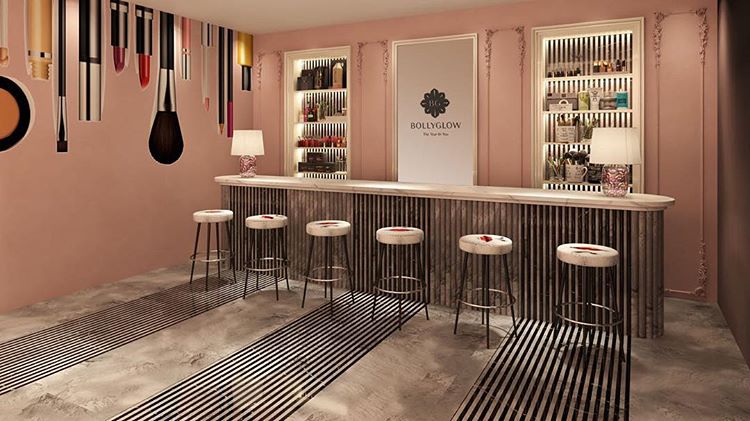 Putting up a query to his wife, Shah Rukh commented on her post, "When are you designing my office?" To this, Gauri typed out a tongue-in-cheek response, "As soon as I have some free time..." followed with a smiley. Like husband, like wife! Just how witty SRK is with his answers, his wife is following the steps too. Here’s the screenshot of their banter: 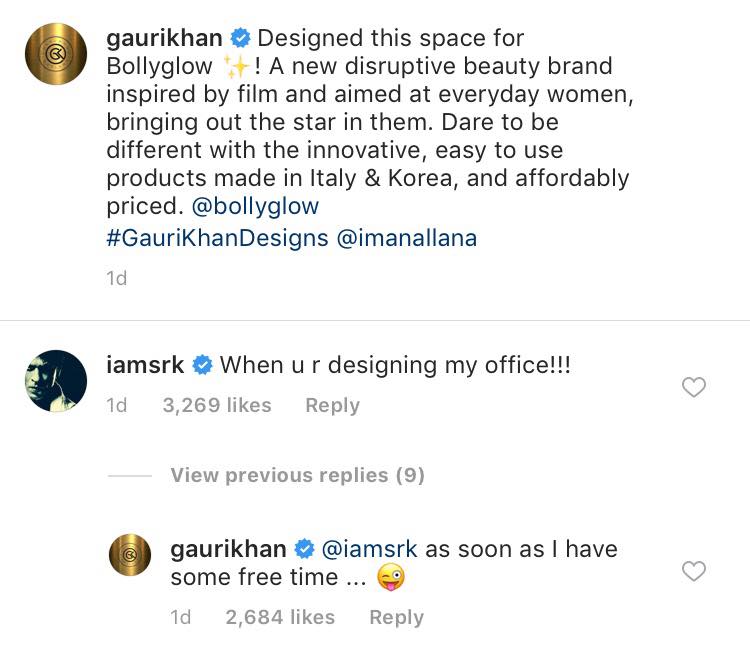 They say that behind every successful man, there's a woman who stands in support of him through thick and thin. This stands true for the Badshah of B-town, Shah Rukh and his Begum, Gauri who has been each other’s pillar of strength and source of happiness. At the Hello Hall Of Fame Awards, Gauri Khan was bestowed with Excellence in Design award. Shah Rukh beamed with happiness and pride as his lady-love went up to the stage to receive the award. In her acceptance speech, Gauri remarked, “For the last thirty years, I have attended so many award functions with my husband and this is the first time that I have received an award and he is sitting right here, this one is for you." (Also Read: Shah Rukh Fell For Gauri At The Age Of 18 And Asked Her For Dance, Which She Turned Down) 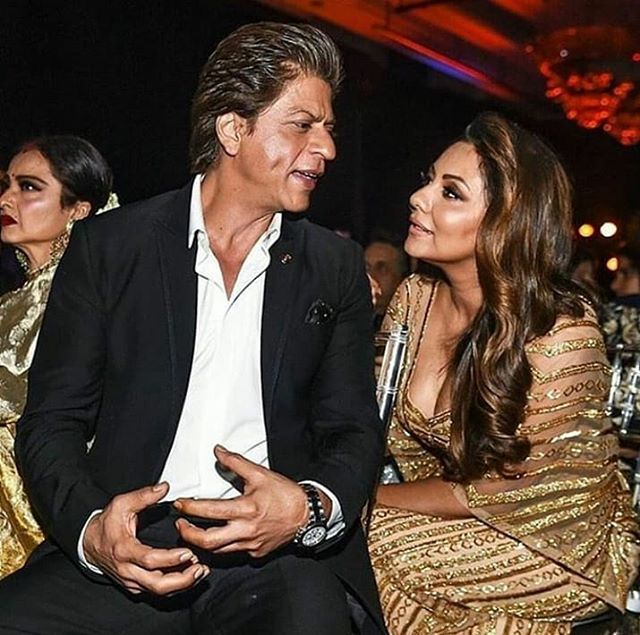 In an interview with Vogue, Gauri was quoted as saying, “My life is with Shah Rukh and the kids. He is the best husband and father I could ever ask for. I always say that I am so fortunate to be with Shah Rukh Khan, the man. I don’t come from a space where I gush and praise—the world is doing enough of that. I like to keep my love for him private and inside the doors of Mannat.” 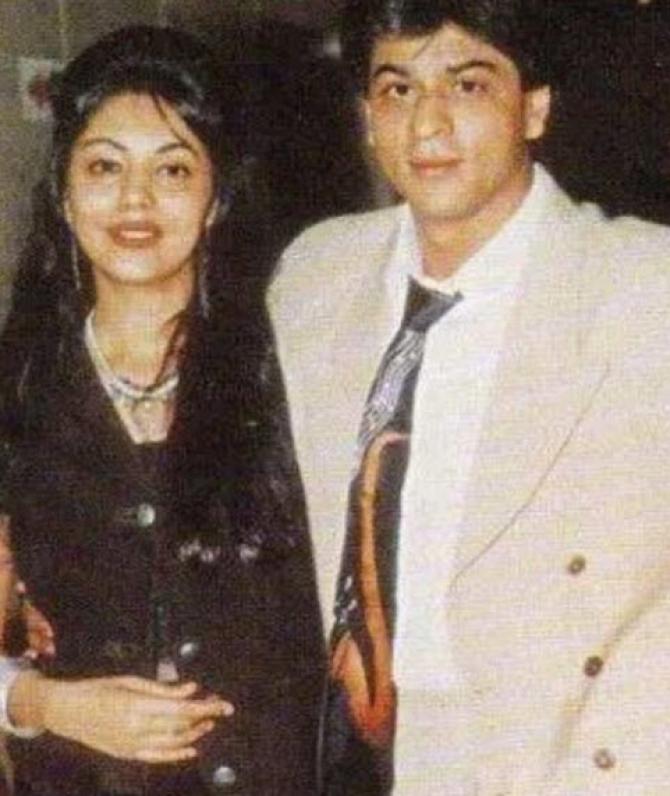 And in Shah Rukh’s words, “We give marriage too much importance; we’re trying too hard. Things that are done with ease, acceptance and love will always be successful. The best thing we do is wake up in the morning and have a cup of tea and family time. I can’t understand the importance given to Gauri and my marriage—if you can keep a marriage ordinary, that’s what makes it special.” 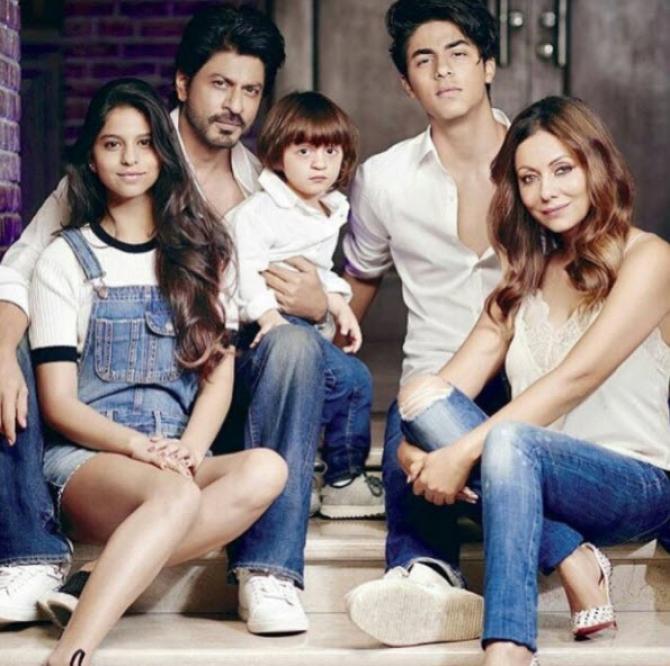 In another interview, when Shah Rukh was asked if his stardom has affected their relationship ever, he replied, “We are both really easy, and we've never encroached upon the other's space. I'm a movie star, I've been working for 20 years. I work with the most beautiful women in the world. Whether I think of it like that or not, there are enough stories to go around...that I sleep around with foreigners, with men, with my co-actresses. But it has never affected us because I guess she knows I don't have the time to do anything but work.” (Also Read: This Is How The Interiors Of Shah Rukh Khan And Gauri Khan's House 'Mannat' Look Like) 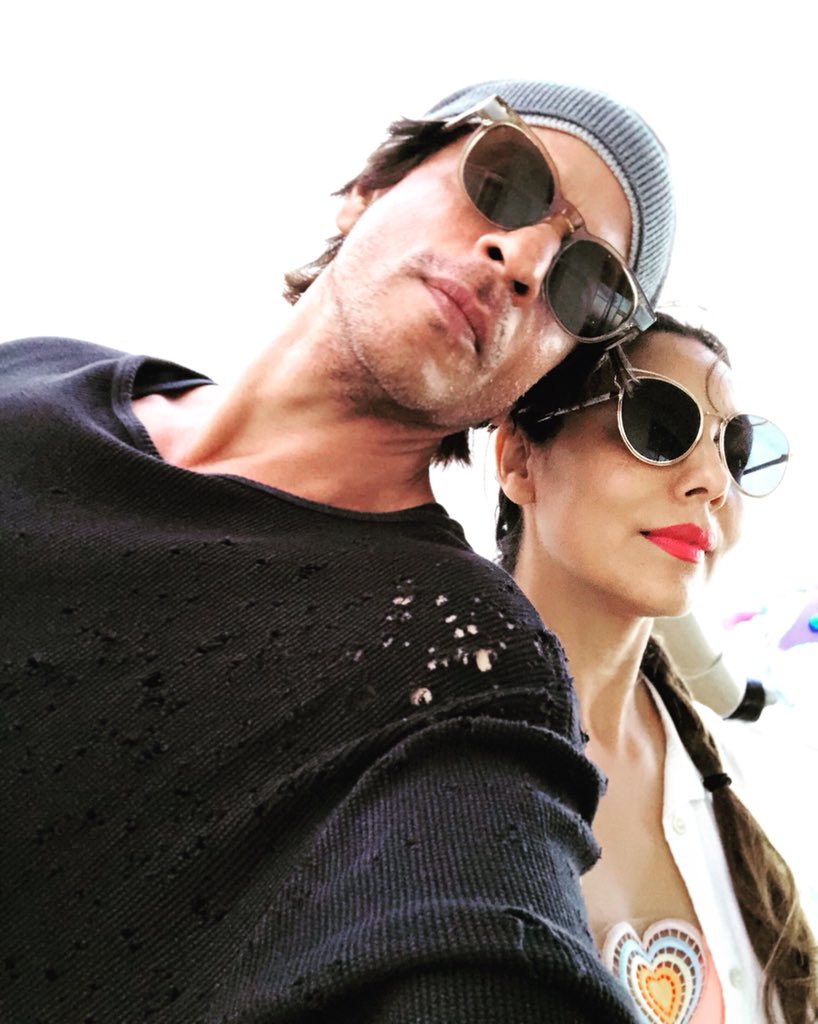 Thank you, Shah Rukh and Gauri for teaching us the true meaning of love! Here's wishing you two many more years of togetherness and love. 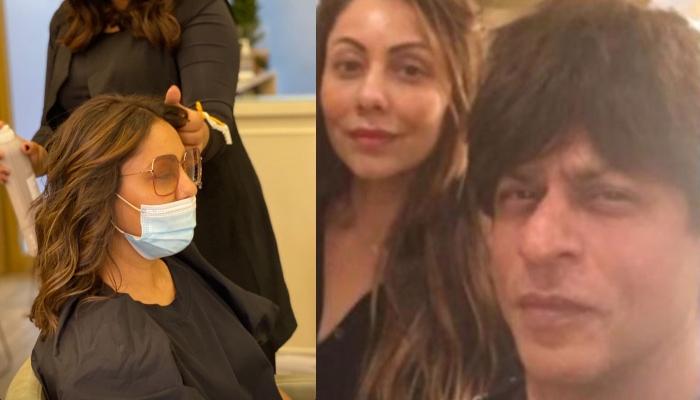 “Feels like forever, seems like yesterday... Nearly three Decades and Dearly three kids old. Beyond all fairy tales I tell, I believe this one, I have got as beautiful as beautiful can be!” This, with a beautiful loved-up picture with his wife, Gauri Khan, Shah Rukh Khan had penned on