Meet the grandniece of Dilip Kumar and Saira Banu, Sayyesha Saigal! Despite the age gap of 17 years, Sayyesha is married to South actor, Arya. Check out their love story inside!

The ‘Tragedy King’ of Bollywood, Dilip Kumar was indeed a living legend, who passed away on July 7, 2021, leaving a legacy behind. He was born in the Qissa Khawani Bazaar area of Peshawar, British India (modern-day Khyber Pakhtunkhwa, Pakistan), Dilip Kumar is one of the 12 children of Ayesha Begum and Lala Ghulam Sarwar Khan. While his professional life was a huge success with films like Mughal-E-Azam, Kranti and others, his love story with Saira Banu is an epitome of true love.

Dilip Kumar and Saira Banu had tied the knot on October 11, 1966, despite the age gap of 22 years. While the couple never had any kids, there is no denying that they belong to a big family with many relatives. Once in an interview with the Hindustan Times, Dilip Kumar had shared that he has no regrets about not having a child as they are happy with their families, nieces and nephews. One of the grandnieces of Dilip Kumar and Saira Banu is the stunning actress, Sayyesha Saigal. 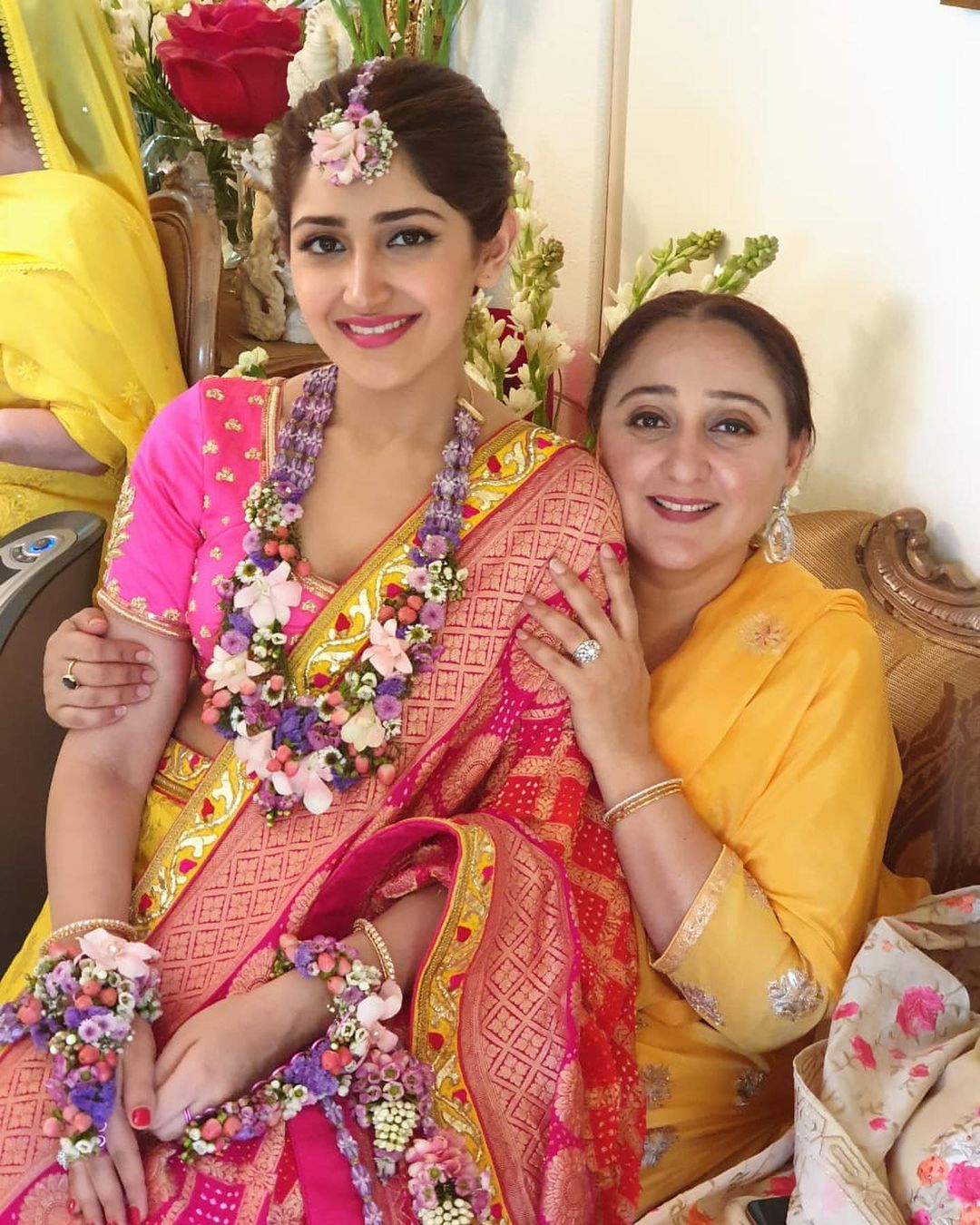 Sayyeshaa Saigal is the daughter of famous '90s actor, Sumit Saigal and Shaheen Banu. Shaheen Banu is the daughter of Saira Banu’s brother, Sultan Ahmed. Sayyeshaa is an avid user of social media and has more than 23 lakh followers on her IG handle. Sayyeshaa is a big name in the Tamil film industry. She had started her acting career at the mere age of 18 and had made her debut with the film, Akhil in 2015. She is popular for her characters in the films like Yuvarathnaa, Kaappaan, Teddy. She had made her debut in Bollywood with the film, Shivaay opposite Ajay Devgn.

Also Read: Ramayan's Manthara, Lalita Pawar's Life: From An Accident To How Her Sister Became Her 'Sautan' 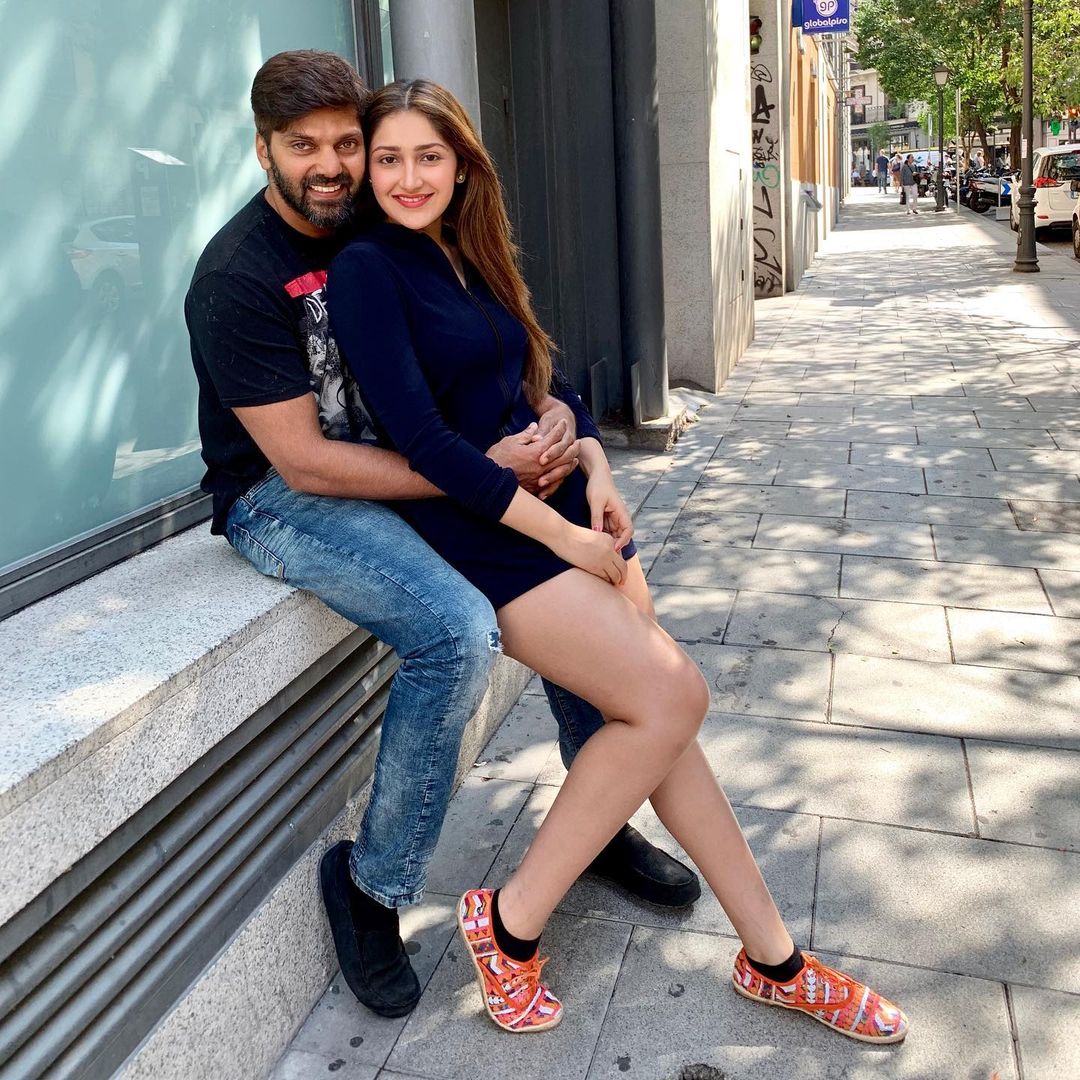 “Not knowing how serious Arya was about her (Sayyeshaa), we used to tease him thinking this is one of his usual, healthy flirtings. However, Thalaivar already sketch potutaru (he has already planned on his forever with her).” 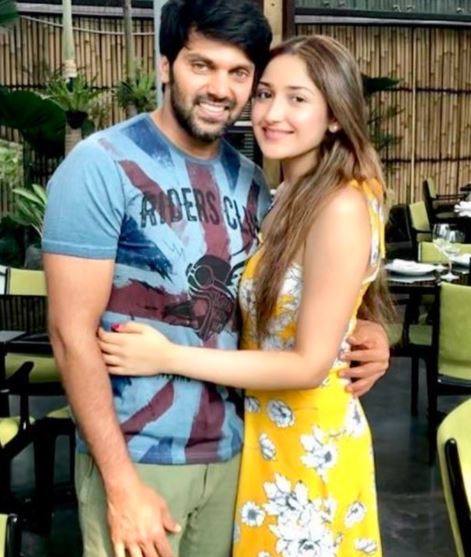 On February 14, 2019, Sayyeshaa had announced her wedding with South star, Arya. Announcing the news of her marriage with her fans, Sayyeshaa had shared a note on her Instagram handle and had written:

“With the blessings of our parents and family, we are delighted to share with you the most beautiful day of our lives. We are getting married this March! We seek your love and blessings in our new journey of happiness and togetherness.” Sayyeshaa and Arya had a grand pre-wedding bash at Hyderabad’s Taj Falaknuma Palace. The couple had looked royal as they had coordinated their outfits in white and silver colour. While Sayyesha had worn a white lehenga with silver crystal work embellished all over it, Arya had opted for a white self-work kurta with an embellished silver Nehru jacket. In a few pictures from their sangeet, Sayyeshaa’s grandmother, Saira Banu was seen dancing. 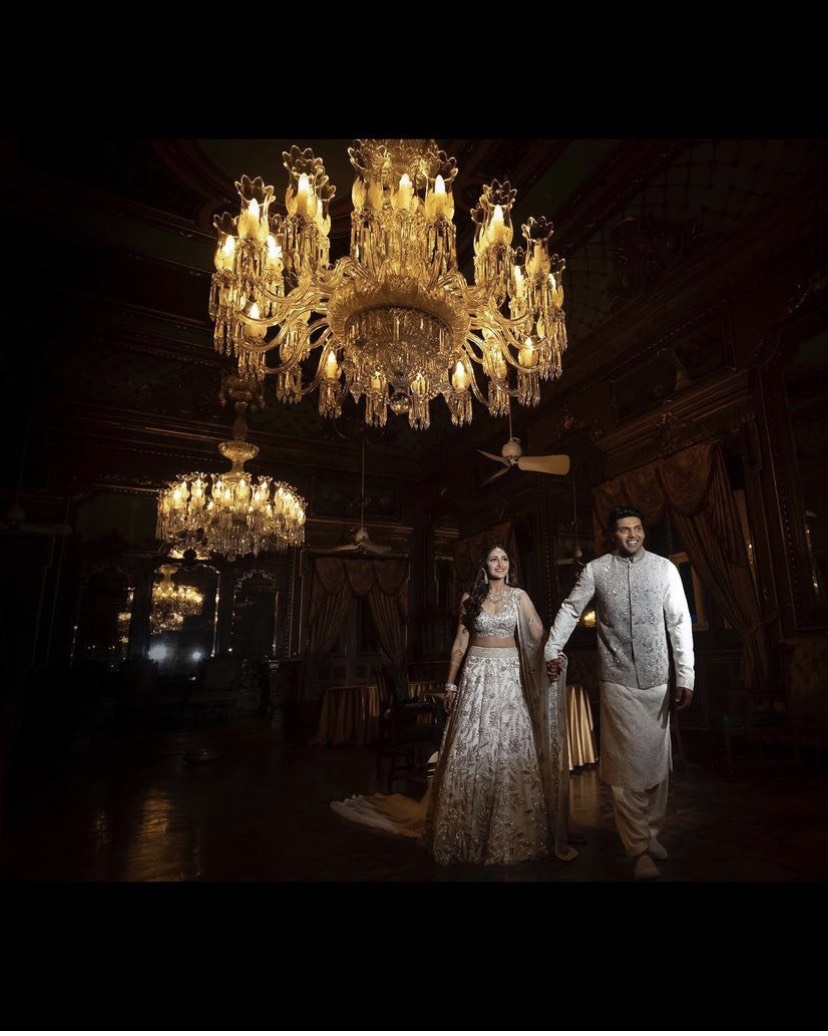 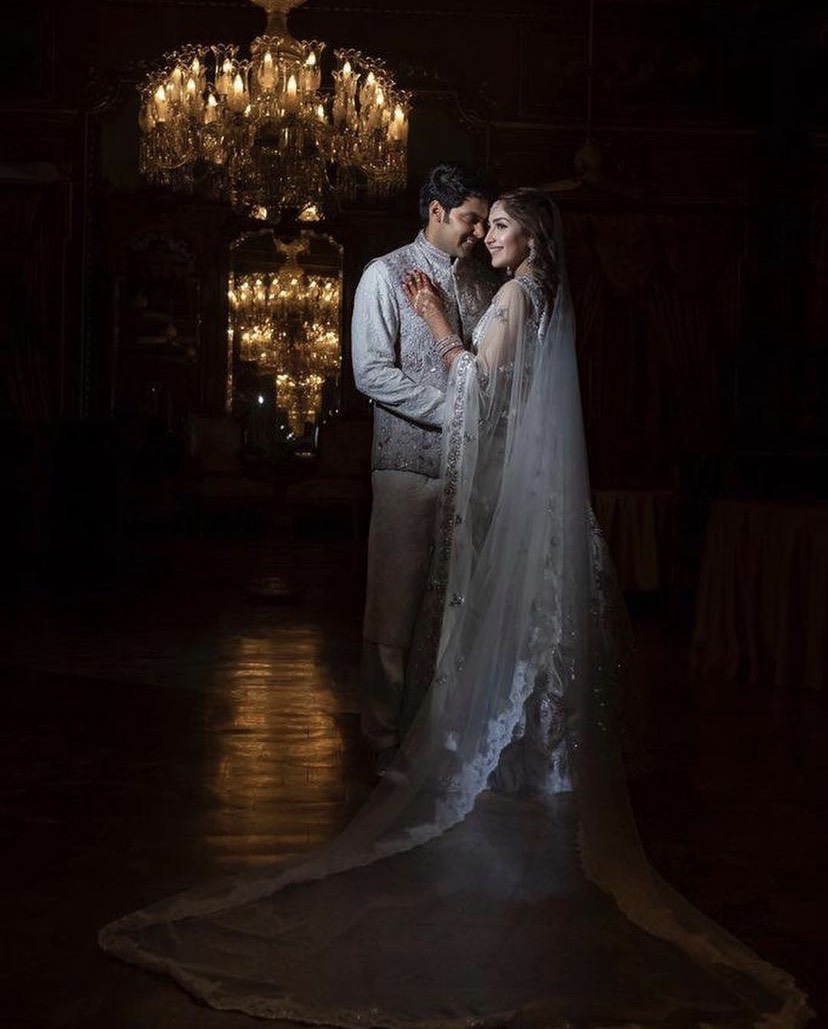 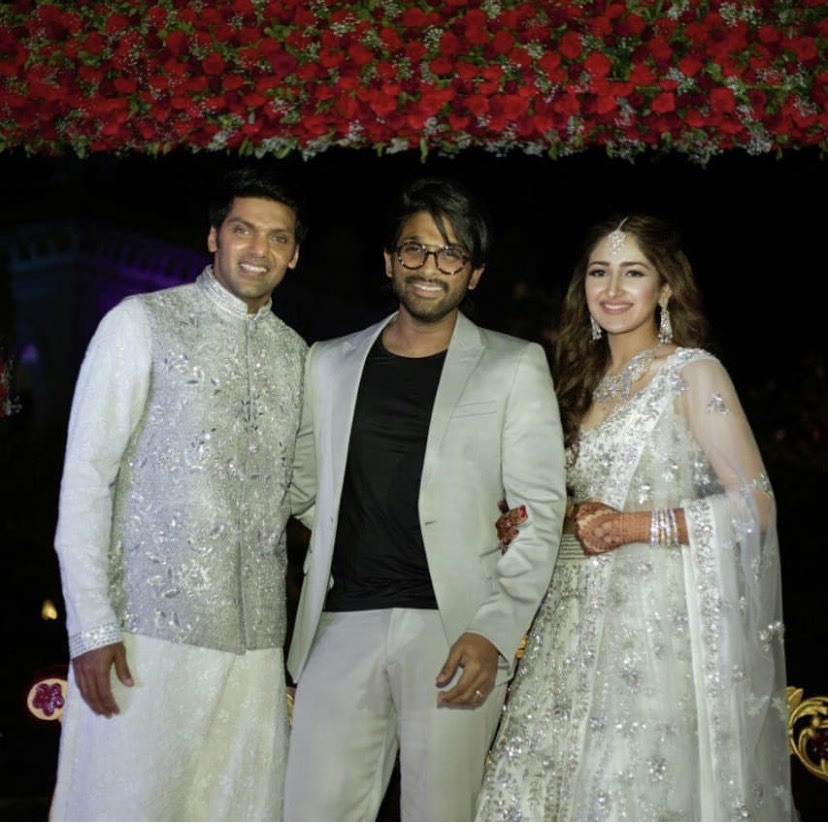 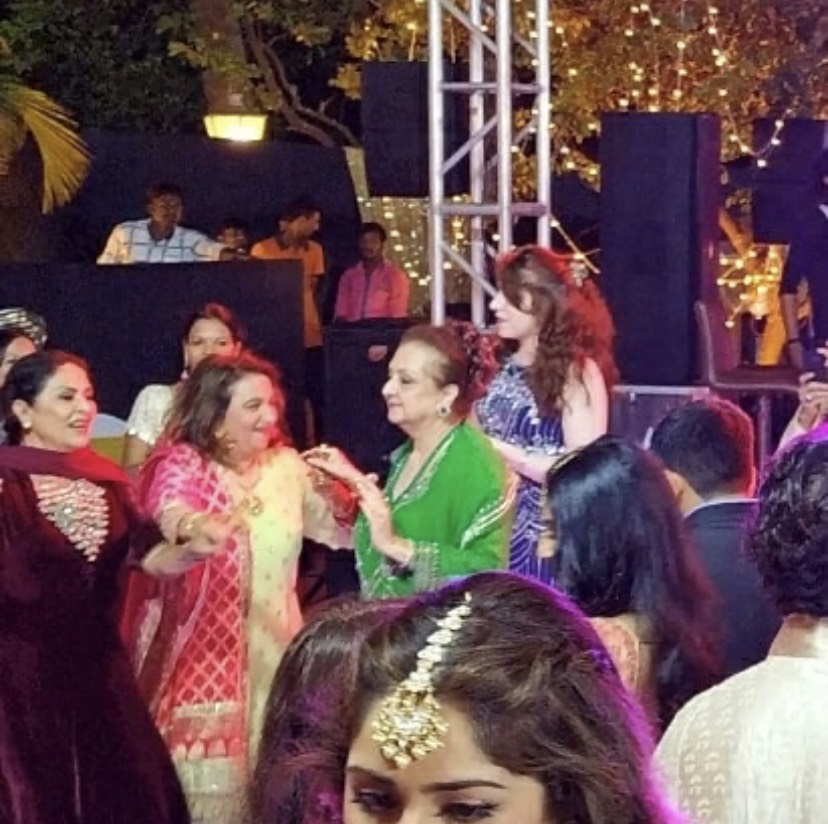 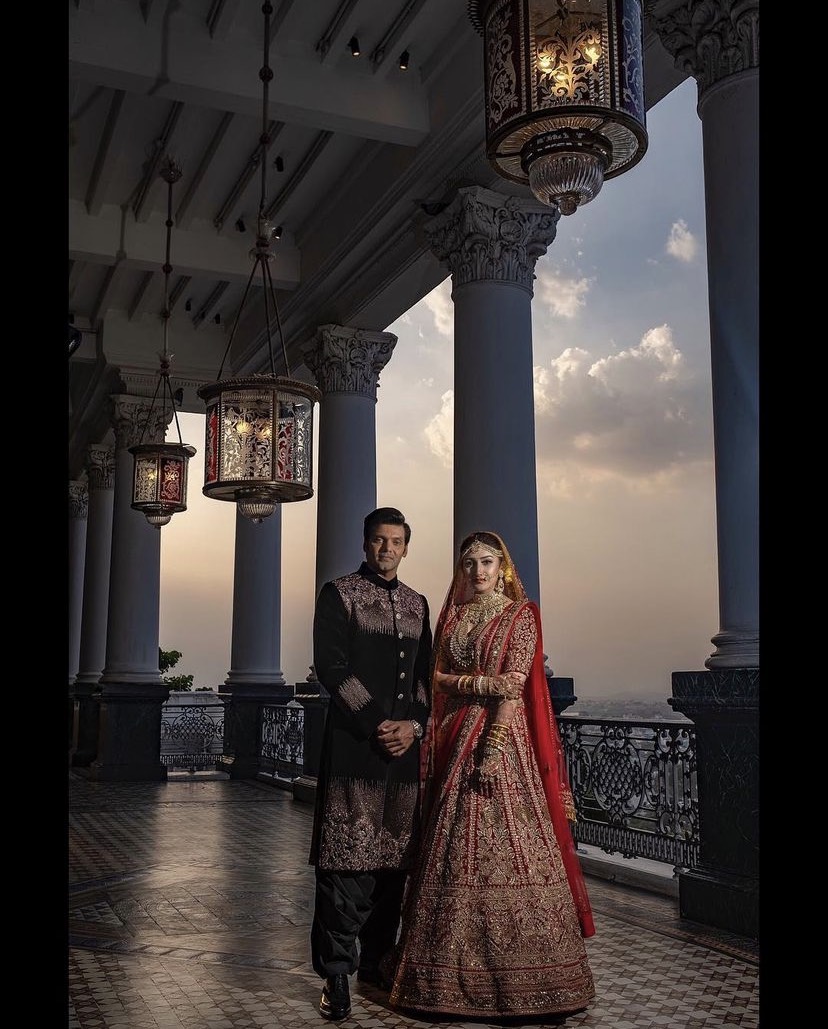 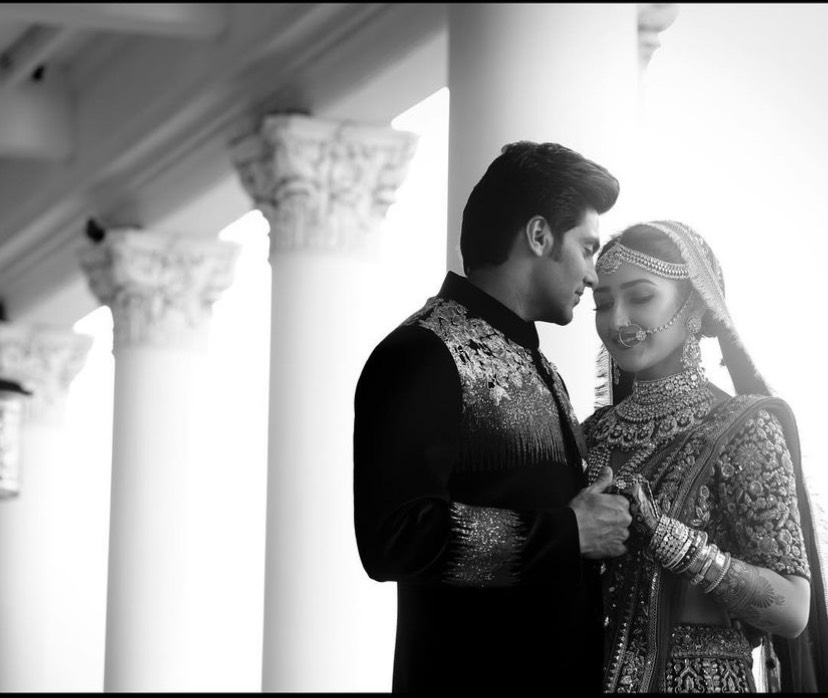 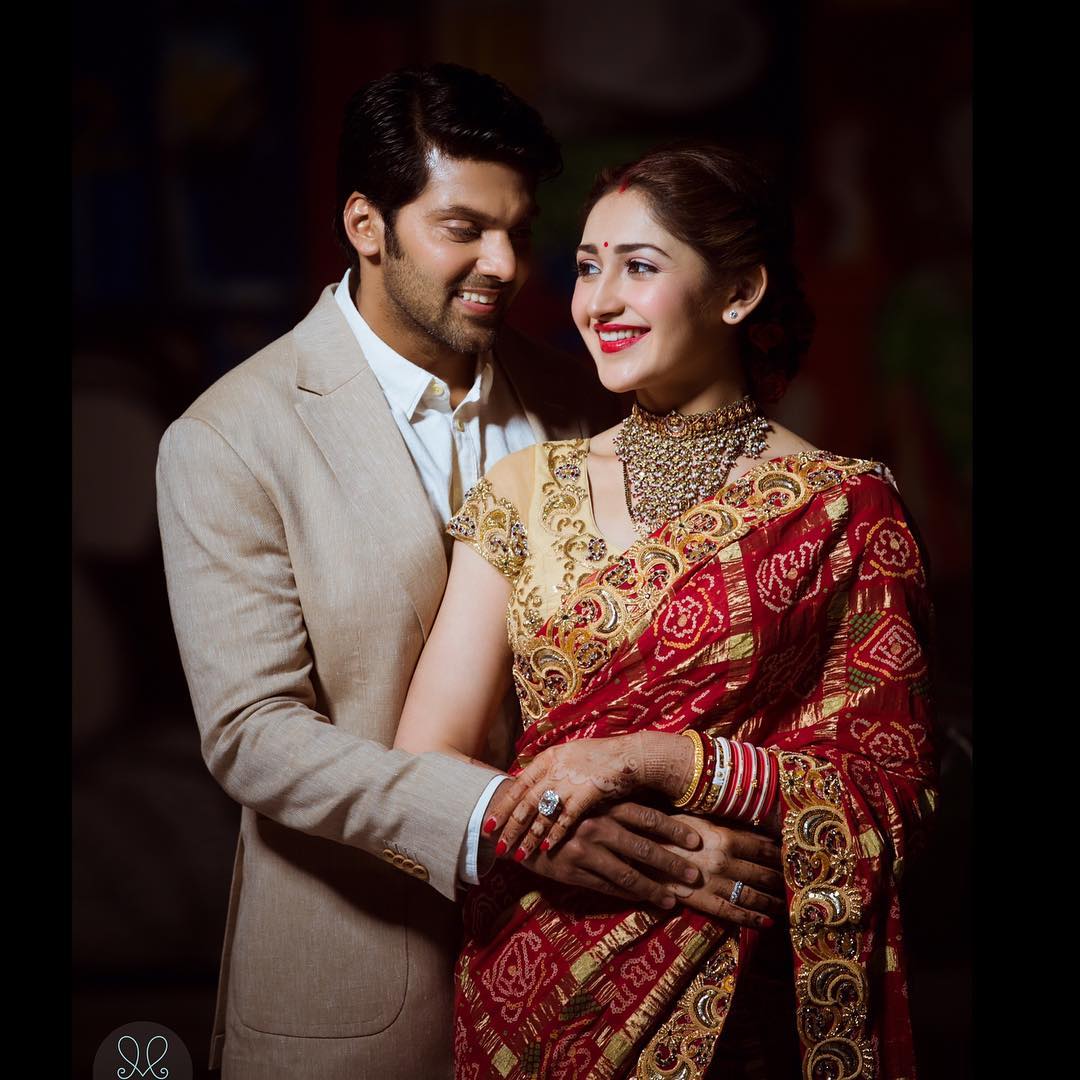 A week after their wedding, Sayyeshaa and Arya had hosted a grand wedding reception in Chennai, where the couple had also exchanged rings. For the reception, Sayyeshaa had looked gorgeous in a traditional Gujarati saree in the shades of red and golden. With her hair neatly tied in a bun adorned with red roses and a neckpiece, Sayyeshaa had exuded a new bride glow, flaunting her sindoor, mangal sutra and chooda. On the other hand, Arya had looked suave in a beige suit with a white shirt. 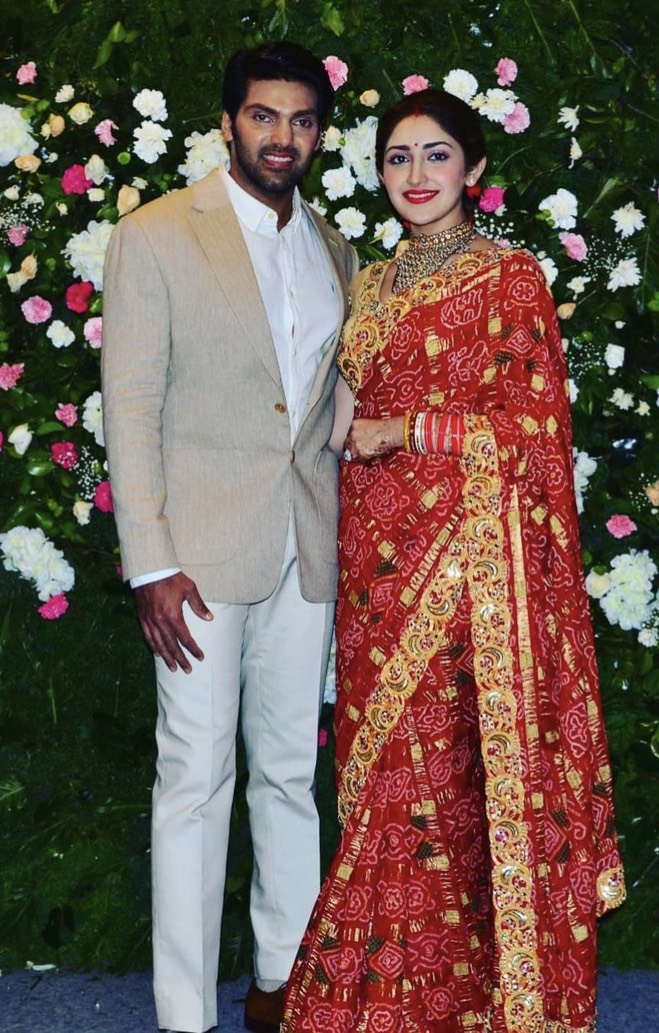 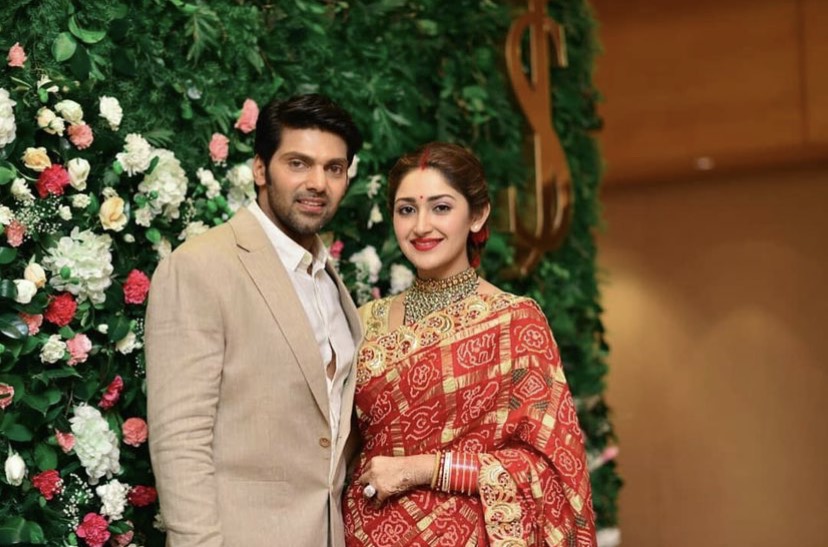 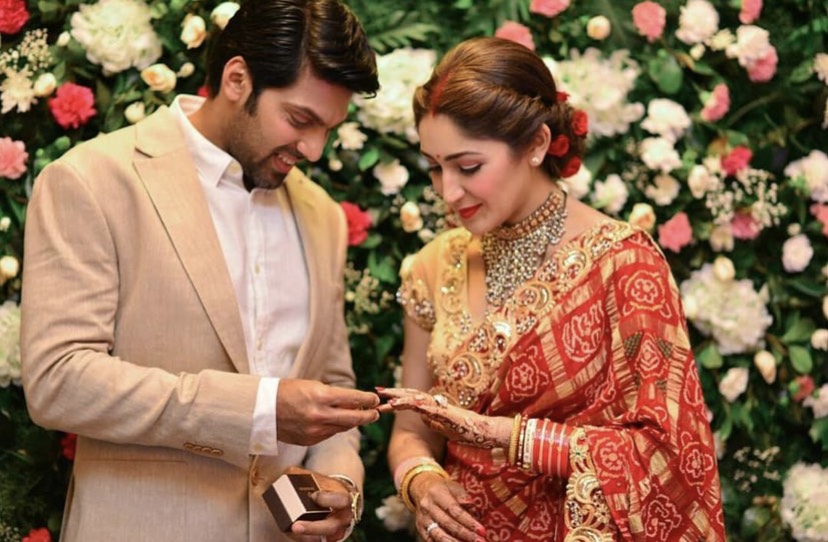 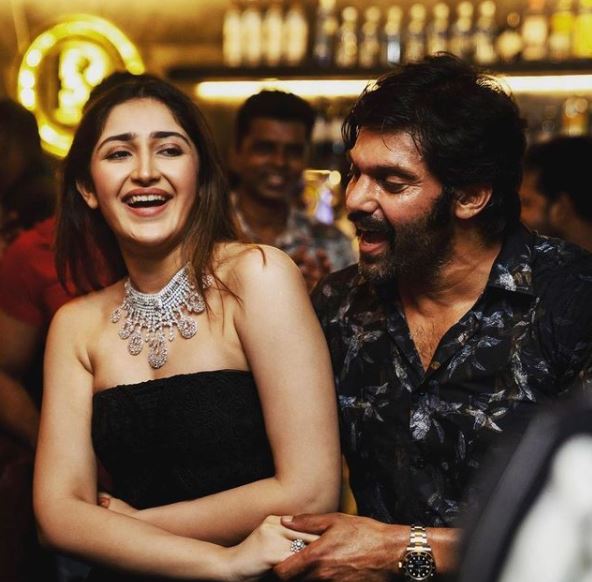 Ever since Sayyeshaa and Arya had tied the knot, netizens never skipped a chance to troll them for their age gap. On December 21, 2020, Kaappaan actress, Sayyeshaa had shared a beautiful picture with her husband, Arya from their romantic dance in a club on her IG handle. In the picture, while Sayyeshaa had looked gorgeous in a black tube dress and a diamond necklace, her hubby, Arya had opted for a floral printed dark blue shirt. Sayyeshaa had captioned the picture as 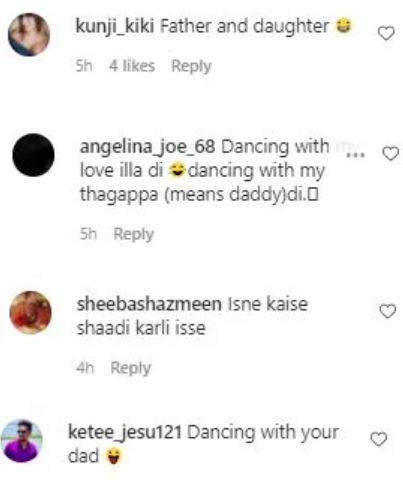 Suggested Read: Dia Mirza, Neha Dhupia And 8 Other Celebs, Who Got Massively Trolled For Announcing Their Pregnancy Sayyeshaa and Arya had not announced the news of their pregnancy. However, the couple had welcomed their first child after two years of their wedding in July 2021. Actor, Vishal, who shares a great bond with Arya, had announced the good news on his Twitter handle, revealing that Arya and Sayyeshaa had welcomed a baby girl. He had tweeted: 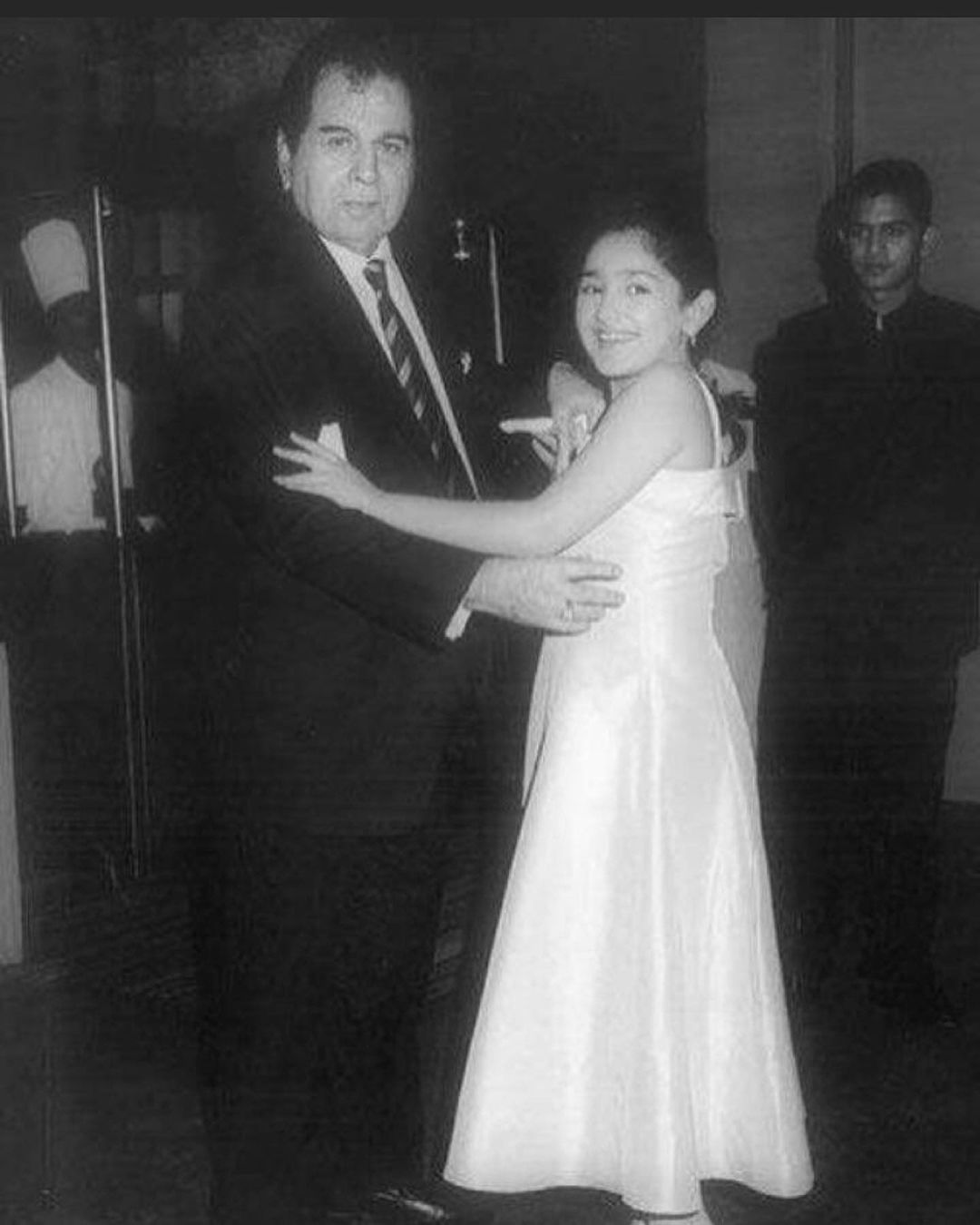 On July 7, 2021, when Dilip Kumar had breathed his last, his grandniece, Sayyeshaa had shared a throwback picture with him, where the two had posed together while enjoying a dance session. Sharing the picture, Sayyeshaa had mentioned how she was blessed to have spent her childhood with Dilip saab. Penning her tribute, she had written:

“I’m blessed to have spent so much of my childhood with the legend who the world knows as #DilipKumar For me he will always remain my warm hearted Phuponana, with whom I sang and danced, learnt so much from and loved to bits! It’s an end of an era! #RIP.”

Sayyeshaa has made her own name in the Tamil film industry despite being the grandniece of Dilip Kumar and Saira Banu, speaking loud about her talent. On the personal front, her love story with Arya speaks highly of the kind of bond they share as, despite the age gap or constant trolling, the two have been by each other's side. We wish Sayyeshaa and Arya a lifetime of happiness!