Arjun Kapoor's film, 'Sardar Ka Grandson' released on Netflix on May 18, 2021, and in a post on Instagram, the actor revealed how the movie has made him tap into his beautiful childhood memories.

Being an artist helps you experience the moments you didn't get a chance to live in real life and relive the memories with the characters which hold a special place in your heart. Bollywood's favourite Ishaqzaade and heartthrob, Arjun Kapoor hails from the prominent Kapoor family of the industry and so, the pressure on him to prove to be more than just a star-kid was immense. Eventually, in his career in Bollywood, close to a decade as an actor, Arjun created a niche for himself in the industry and proved his mettle as an artist, shutting everyone who doubted his talent by tagging him as a product of nepotism.

Also Read: Arjun Kapoor Can't Fulfill His Grandmother's Wish, Says He is Relying On 'Married Kapoors' For It

Arjun Kapoor Shares A Cute Poem He Had Written For His Mother, Mona Shourie When He Was Twelve

The only regret Arjun Kapoor has in his life is that his mother, Mona Shourie Kapoor couldn't see her son make a name for himself as an actor. Mona had taken her last breath a few days before the release of Arjun's debut film, Ishaqzaade. On May 11, 2021, Arjun had completed nine years of being an actor and he expressed how lost he feels without his mother by his side. In a special post for his mother, Arjun had written, "Yesterday was Mother's Day I hated every bit of it... Tomorrow is 9 years of me being an actor but I'm still lost without you Mom. Just like in this picture I hope ur smiling watching over me & u got my back..." Arjun Kapoor's film, Sardar Ka Grandson released on Netflix today, on May 18, 2021, and in a post on Instagram, the actor revealed how the movie has made him tap into his beautiful childhood memories and life experiences. In a note that is captioned as "For Family", Arjun wrote, "I have been fortunate enough to get films that have made me tap into my beautiful childhood memories and life experiences. Whether it was a Ki & Ka which was for my mother or now Sardar Ka Grandson for my grandmothers, these are films that have connected to my soul and will forever be my most favourite films." 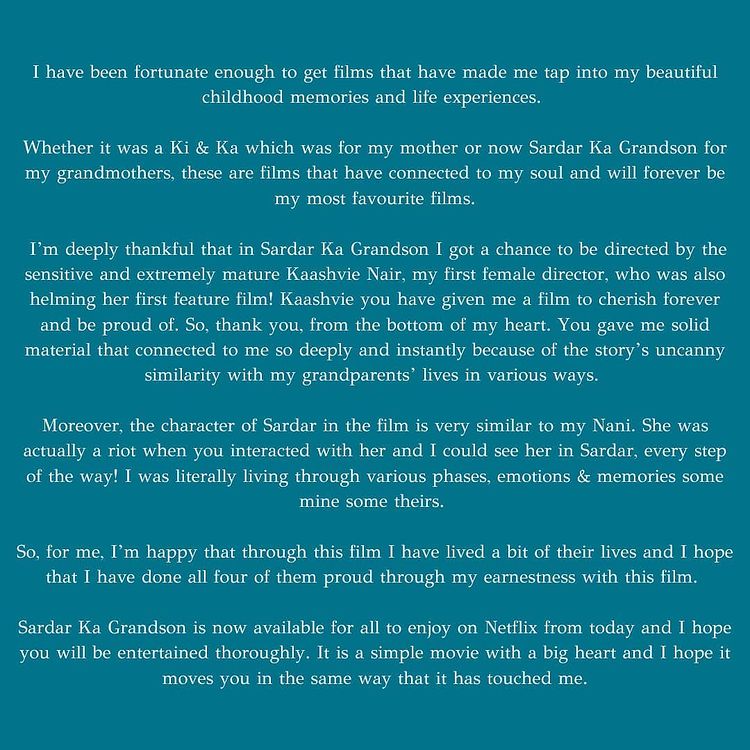 Thanking his first female director, Kaashvie Nair for giving him a film that shares an uncanny similarity with his grandparents' lives in various ways, Arjun Kapoor added, "I'm deeply thankful that in Sardar Ka Grandson I got a chance to be directed by the sensitive and extremely mature Kaashvie Nair, my first female director, who was also helming her first feature film! Kaashvie you have given me a film to cherish forever and be proud of. So, thank you, from the bottom of my heart. You gave me a solid material that connected to me so deeply and instantly because of the story's uncanny similarity with my grandparents' lives in various ways." Speaking of how the character of Sardar in the film, Sardar Ka Grandson is similar to his maternal grandmother, Arjun Kapoor concluded, "Moreover, the character of Sardar in the film is very similar to my Nani. She was actually a riot when you interacted with her and I could see her in Sardar, every step of the way! I was literally living through various phases, emotions & memories some mine some theirs. So, for me, I'm happy that through this film I have lived a bit of their lives and I hope that I have done all four of them proud through my earnestness with this film." When Arjun Kapoor and Kareena Kapoor Khan's film, Ki & Ka had completed 5 years in 2021, he had posted a picture, holding a mangalsutra in his hand as he lovingly looked at it. Revealing that the mangalsutra is memorabilia from Ki & Ka and the personal reason behind choosing this film, Arjun had written, "A piece of memorabilia from ki & ka!!! Missing the set and missing the on screen Ki... this film was personal as I chose it for my mom and it's now even more personal after working with Bebo and Balki sir... I think we need a sequel, what say Kareena Kapoor? #5YearsOfKiandKa" in his caption. Also Read: Arjun Kapoor Talks About His Sisters, Anshula, Janhvi And Khushi, Reveals What He Learned About Them

We wish Arjun, all the best for his film, Sardar Ka Grandson!