Sara Ali Khan and Ibrahim Ali Khan share a close bond with their mother, Amrita Singh. In a TikTok challenge, the brother-sister duo agrees on who is the most popular of them all. Deets Inside!

For every child, their mother is the most powerful woman in the world. No matter what, a mother goes to any extent to fulfill every demand of her child. Bollywood’s most popular brother-sister duo, Sara Ali Khan and Ibrahim Ali Khan share a similar bond with their mother, Amrita Singh. Even after carrying the famous lineage of the Pataudi khandaan, Sara and Ibrahim are the most down to earth star kids, courtesy to their mom, Amrita Singh. (Also Read: Janhvi Kapoor And Khushi Kapoor Revealed Who Is Getting Married First In 'Who Is Most Likely' Video)

From raising her two children, Sara and Ibrahim on her own to getting Sara dressed up for her abba, Saif Ali Khan’s second marriage, Amrita Singh has always been an exemplar of a perfect mother. The star kids dote on their mother and Sara has always expressed her undying love for Amrita. She once expressed that she doesn’t want to get married and always wishes to stay with her mother for the rest of her life.

Since everyone is spending time with their family amidst the lockdown, some are passing their time by donning the chef’s hat while some are making funny TikTok videos. On April 17, 2020, Sara Ali Khan took to her Instagram handle and shared a funny TikTok challenge which included her mother, Amrita Singh, and brother, Ibrahim Ali Khan. The challenge tests how much the participants know each other. While answering many questions, Amrita, Sara and Ibrahim agreed on a particular question which asked, ‘Who is the most popular among them’? Both Sara and Ibrahim pointed their fingers on their mother, Amrita. Sara captioned the video as “The only thing that we can always agree on is Singh is King.”

Amrita Singh dotes on her son, Ibrahim and had stated that he is a gifted child. In an interview with Times Now, she had shared the qualities of Ibrahim and had revealed, “Ibrahim is the ‘old soul’ in our home. He’s kind and gentle and has the most sorted mind. He’s gifted with the ability to face the harshest truth with a brave smile and a strong will to overcome any shortcomings. But, the one problem I have with them is that they are both extremely messy and untidy.” (Also Read: Disha Patani Left A Cheesy Comment On Rumoured Boyfriend, Tiger Shroff's Mother, Ayesha's Picture)

On February 21, 2020, Sara had taken to her Instagram handle and had shared pictures from her Goa vacation. Along with it, she had written, "Fam-Jam, Sun-Tan." In one of the pictures, we could see Sara riding a modern rickshaw-scooter while her brother, Ibrahim was sitting behind. In the other picture, she had posed with her mommy, Amrita, and brother, Ibrahim.

Sara shares a warm bond with her mother, Amrita and it is clearly visible in her media interactions. In an interview with The Quint, Sara had recalled her favourite love story which she shares with her mother. She had stated, "I think it sounds very cheesy, but I think it’s my mom’s love story with me. Because I think that you know, we’re so programmed to kind of look at love just through the lens of romance. But I think that love eventually is about selfless sacrifice. And I think that’s what she’s done for me. And I think she continues to do that for me. I think that’s a good love story."

On March 8, 2020, Ibrahim had posted an adorable wish for his mother, Amrita Singh on Women’s Day. He had taken to his Instagram handle and had shared an unseen picture of himself with his mother, Amrita. With innocence in his eyes, Ibrahim had looked adorable in a red shirt as he posed with his momma. Along with the picture, Ibrahim had written, “Happy Women’s Day to the best woman I’ll ever know” followed by a heart emoticon. (Also Read: Kamya Panjabi Dang Shares Picture With Shalabh Dang From Their Candle Light Dinner Date In Lockdown)

Do you agree with Sara and Ibrahim? Let us know. 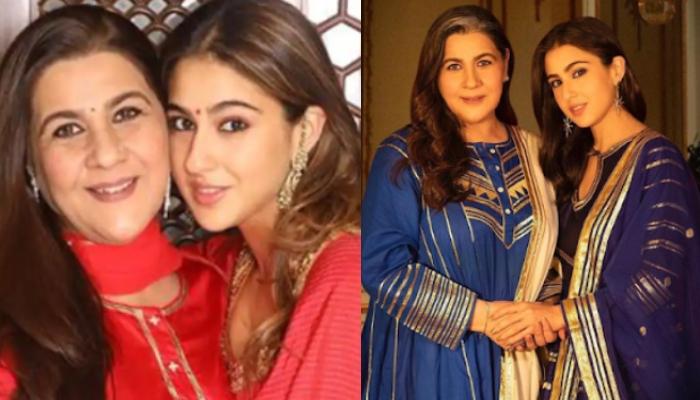 A relationship between a mother and a daughter is the most treasured and trusted one. Mothers are our secret keepers, the shoulders we cry on, the ultimate pacifiers, the pillar which can never fall and the one, who plays a vital role in our lives. From being a mother to a best friend, they