Saif Ali Khan and Amrita Singh’s daughter, Sara Ali Khan who is just a film old has already made a place in the industry and we cannot deny this fact. The actress has been winning hearts with her candid interviews and amazing acting skills that instantly doubled up her followers. Sara made an unbelievably good debut with Abhishek Kapoor’s Kedarnath opposite Sushant Singh Rajput and soon she will be sharing screen space with Ranveer Singh in her second film, Simmba. (Recommend Read: Taimur Ali Khan Goes Horse Riding Again, And It Is The Cutest Thing You Will See On The Internet)

The diva is busy with the promotions of her film and has been attending a flurry of events with co-star, Ranveer Singh. The two have been making us gaga over their candid chats! And in one such interview with entertainment channel, B4U, it was revealed that Sara was a busy kid. Don’t believe us? Well, the host of the show had starred in Star Plus’ popular series, Kkavyanjali and he recalled how Sara used to boss around the sets of her mother, Amrita Singh’s show. Recalling this Sara stated that she is still a bossy child. 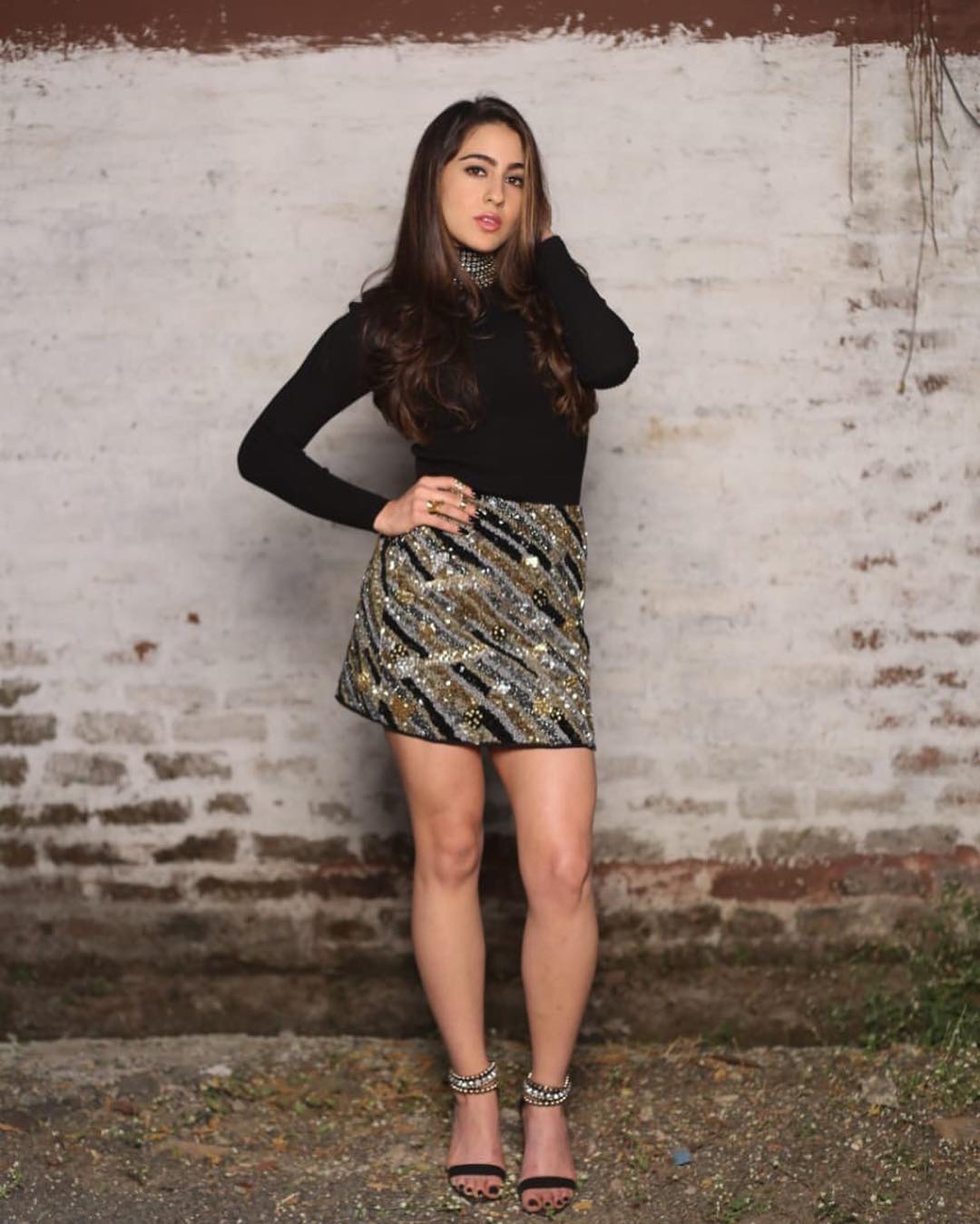 However, we don’t know whether Sara is still bossy or not but one thing is clear that she is hilariously funny. The actress made our day with her sense of humour as she took to Instagram to share a funny ‘before and after’ photo of herself and held Ranveer Singh responsible for the transition. She captioned the picture, “Before and after doing a film with Ranveer Singh.” (Also Read: Deepika And Ranveer Look Like A Perfect Couple At Kapil Sharma And Ginni Chatrath's Mumbai Reception)

In the Instagram story, she was seen in an elegant white ensemble and captioned it as “before” and on the right she shared another picture of herself where she wore a co-ord set full of prints. Well, it was a clear case of poking Ranveer and his outrageous fashion choices. Take a look here: 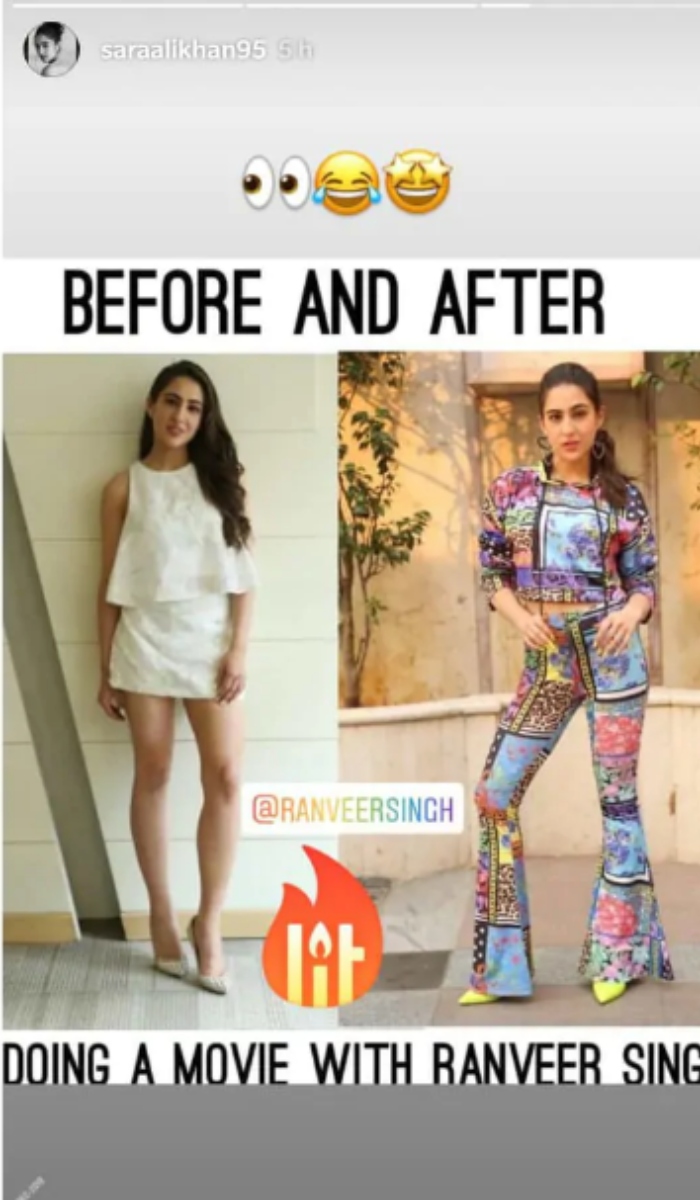 Ranveer being Ranveer cannot let the matter lie down and he shared a meme featuring Sara. Check it out here: 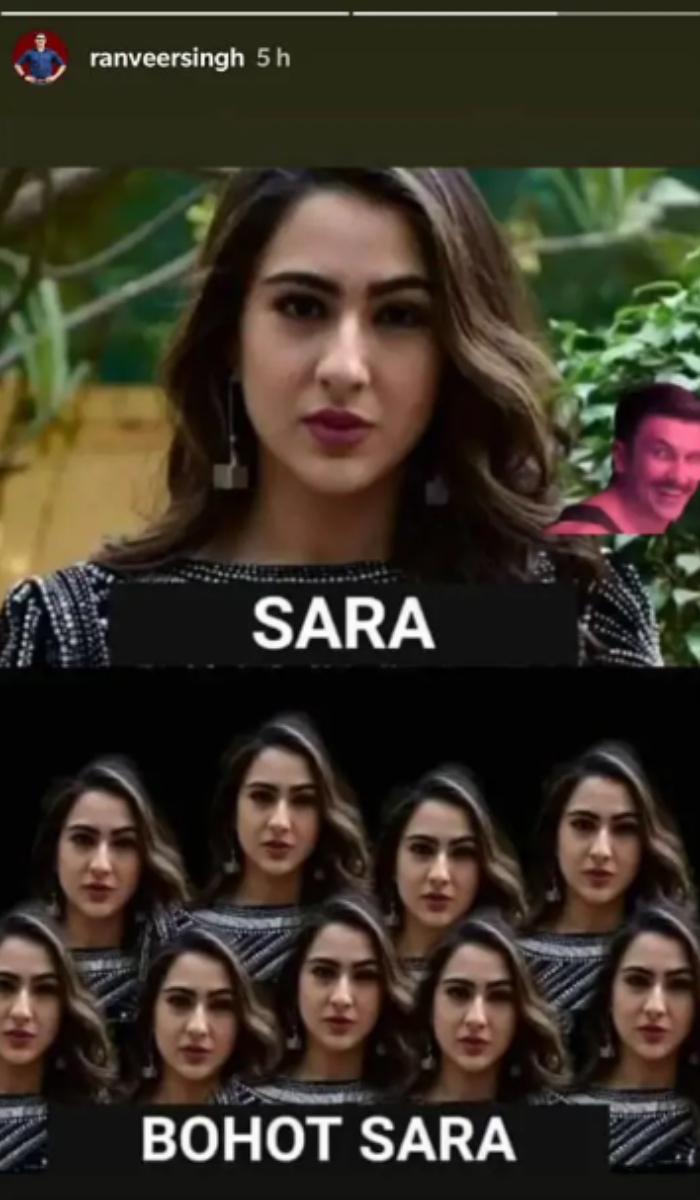 In an earlier interview with India Today, Sara spoke on length about her mother, Amrita Singh and the important role she played in her life. She said, "My mother is a huge part of who I am. I look up to her a lot. It is not necessarily about being a star-kid but about being her daughter. She has always led her life in a very simple and real way. And she has tried to imbibe these qualities in both me and my brother. And it is not because she has been an actor but because even before she became an actor, she was this 'bindaas' and honest person. I have lived with her for 23 years, so I hope some of it has rubbed off me.” (Don't Miss: Kapil Sharma And Ginni Chatrath's Mumbai Reception, Karan Johar, Kriti Sanon, Rekha Arrive) In another interview with DNA, Sara revealed daddy, Saif Ali Khan’s reaction to her first film. She said, “My father calls me every day, saying ‘I loved your work’, talking about one scene or the other and ‘I’m so proud of you’. Every day, more and more people are watching the film and messaging my parents. And quite naturally, they are excited. It’s just amazing. I’m really enjoying this moment.”

Well, we cannot wait to see Sara on the big screen again! Stay tuned for more.

When Amrita Singh Was Almost Shot By A Man, After Saif Ali Khan Left Her All Alone Inside A Room 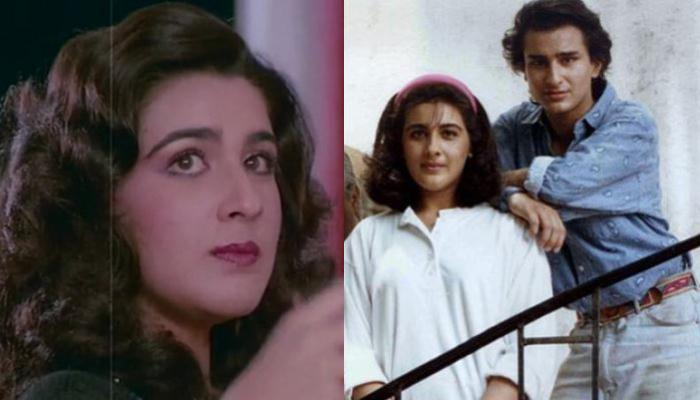 After 13 years of marriage, Saif Ali Khan and Amrita Singh had parted ways and had moved on in their respective lives. However, the two did not let their separation hamper their kids' lives. Even though Sara and Ibrahim live with their mom, they have happy access to their dad's