To mark their 22nd wedding anniversary, Maheep Kapoor and Sanjay Kapoor took a trip down the memory lane and posted pictures from their archives.

No matter how many years have passed by since you have become each other’s forever, your wedding anniversary is still a milestone worthy of celebration. The anniversary is a reminder of the promises you have vowed to your partner and the reason you have fallen in love and had embarked on this beautiful journey together. A day when you shower your partner with love and express what they mean to you. Some pen long notes, shedding light on their journey of togetherness and showering their partner with kind words, some just write a simple ‘happy anniversary’, which too speaks volumes about their feelings. Let’s see how Sanjay Kapoor and his ‘fabulous’ wife, Maheep Kapoor wished each other on their 22nd wedding anniversary. (Also Read: Allu Arjun And Chiranjeevi Dance At Niharika Konidela And Chaitanya's Sangeet And Mehendi Ceremonies)

Born to film producer, Surinder Kapoor and Nirmal Kapoor, Sanjay Kapoor is the youngest of his star brothers, Boney Kapoor and Anil Kapoor, and their sister, Reena Marwah. Sanjay had made his debut in the Hindi film industry with the movie, Prem in 1995 but gained recognition with Raja, in which he had starred opposite Madhuri Dixit. Just as much as his professional front, Sanjay was in the news for his link-up rumours with first co-star, Tabu and Sirf Tum co-star, Sushmita Sen. Three years after making his debut in the film industry, Sanjay had tied the knot with his longtime NRI girlfriend, Maheep Kapoor, proving his link-up reports to be just baseless rumours. 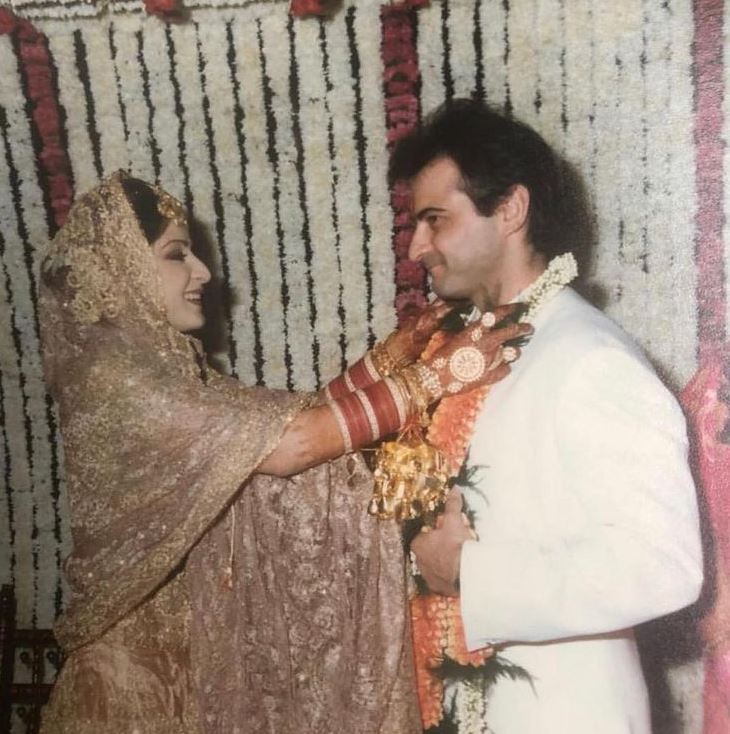 It was this day, 22 years ago, when Sanjay Kapoor had tied the knot with his ladylove, Maheep Sandhu and the latter had changed her surname to Kapoor. To mark their 22nd wedding anniversary, Maheep and Sanjay took a trip down the memory lane and posted pictures from their archives. While Sanjay captioned his post as “Happy anniversary Bollywood wife #22years, So happy to get mobbed as your husband now”, Maheep wrote, “Happy anniversary husband #fabulouslives #22yrs” in her caption. 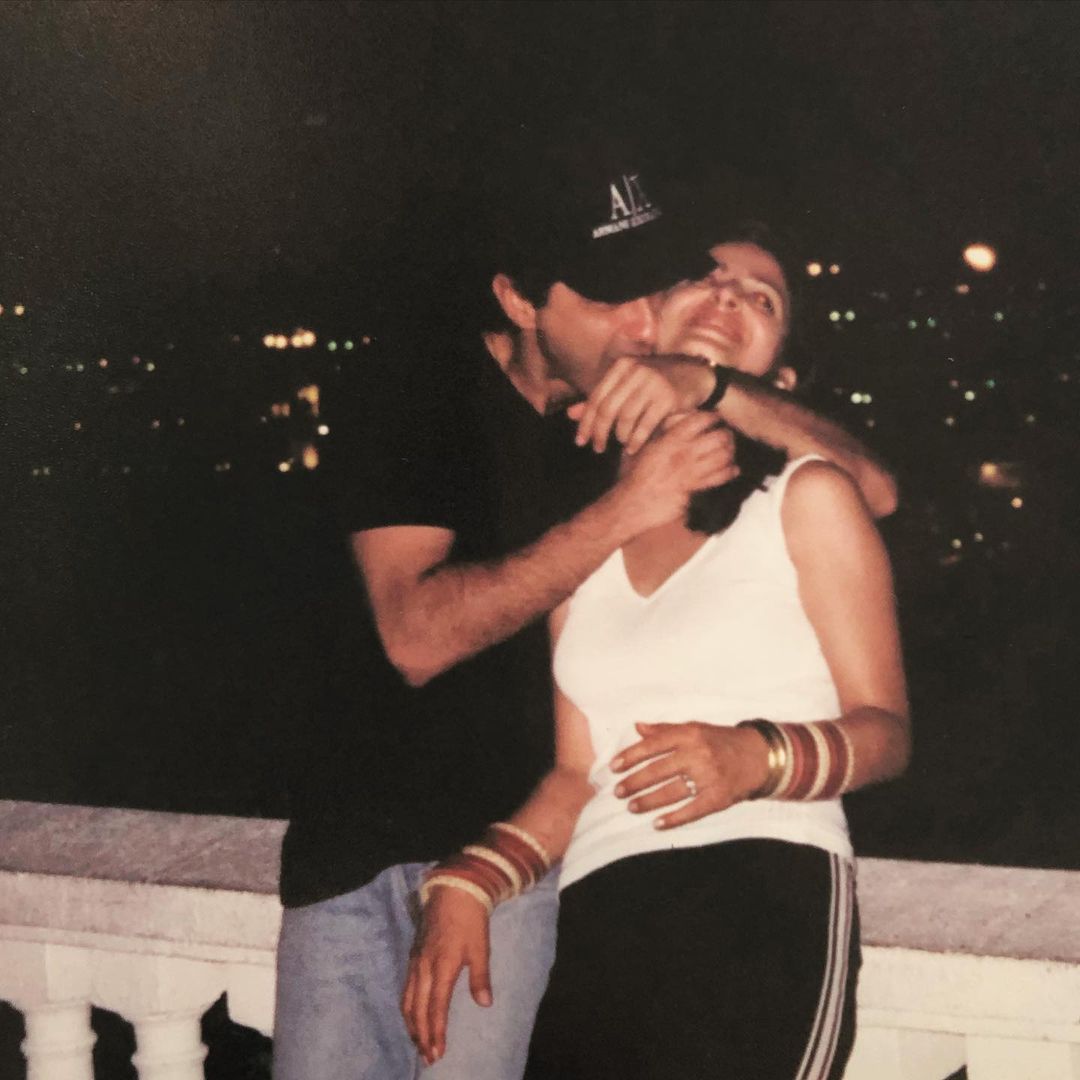 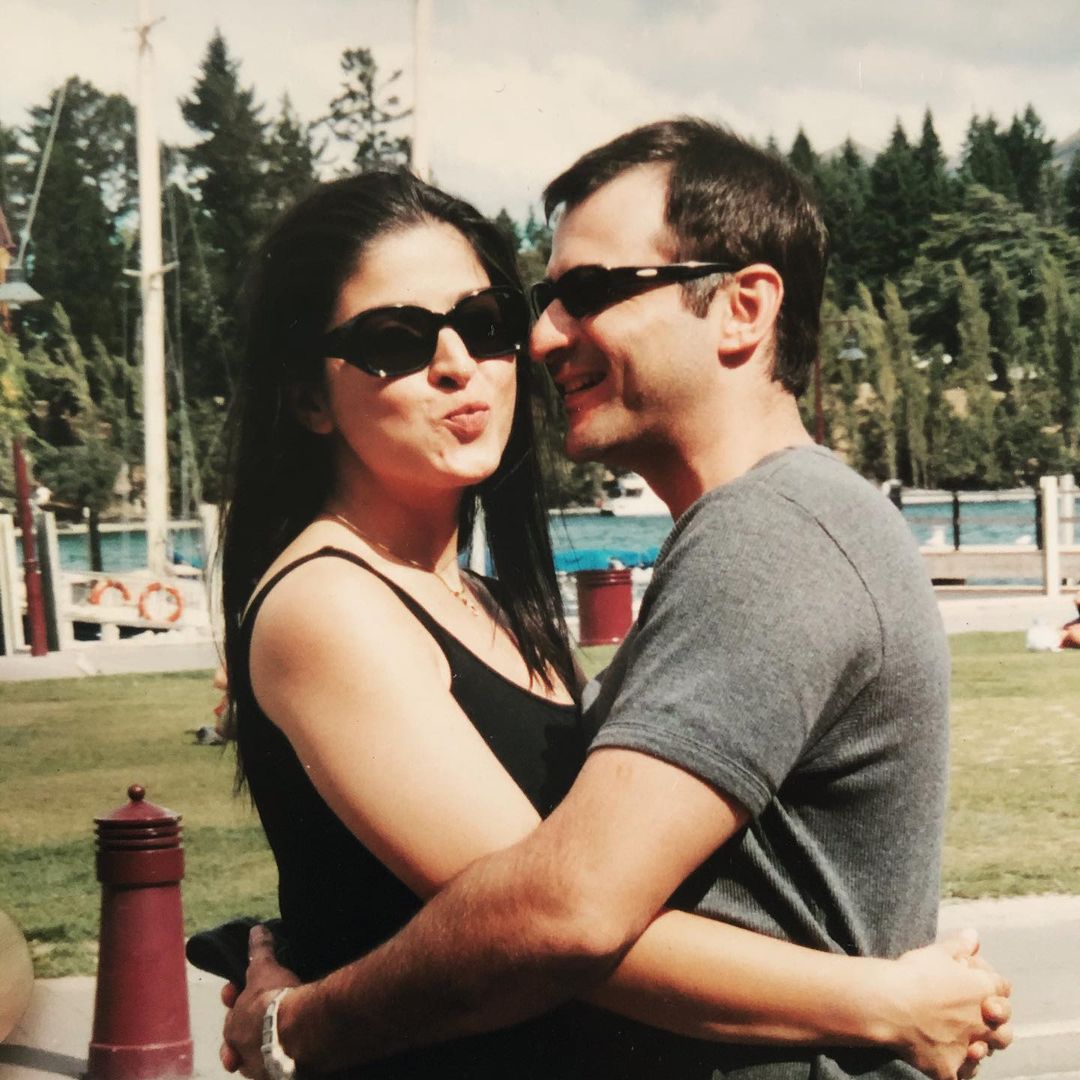 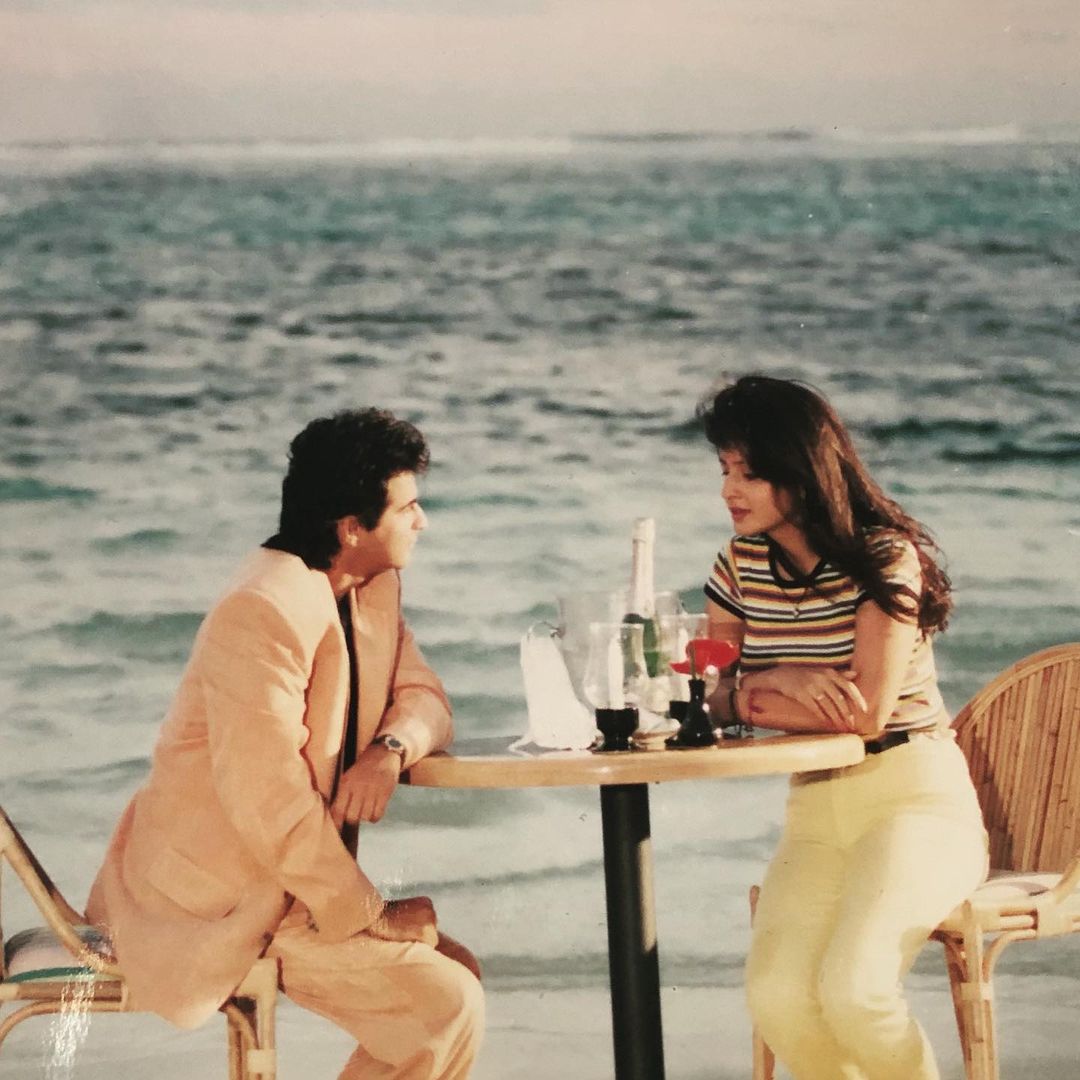 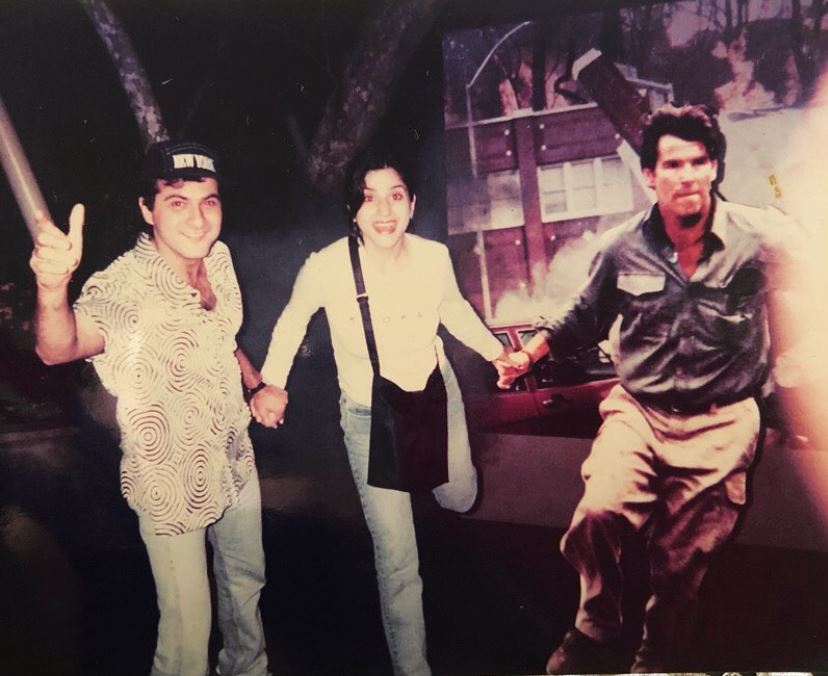 In 2018, Sanjay Kapoor had posted an unseen picture from his wedding rituals with Maheep Kapoor in the frame. But there was another Kapoor, who’s expression caught our attention. It was none other than Sanjay’s nephew, Arjun Kapoor. In the picture, Arjun was bored and sleepy as Sanjay and Maheep completed their wedding rituals. Teasing Arjun for his expression, Sanjay had written, “That’s my expression when Arjun gets married #bored #getitoverwithchachu.” (Also Read: Shabana Azmi On 36th Wedding Anniversary Reveals What Javed Akhtar Says About Their Marriage) Sanjay Kapoor and Maheep Kapoor are blessed with two kids, Shanaya Kapoor and Jahaan Kapoor. Following the footsteps of her star Kapoor family, Shanaya too had begun her professional journey in the film industry but not as an actress. Shanaya had assisted Sharan Sharma in the film, Gunjan Saxena: The Kargil Girl starring her cousin sister, Janhvi Kapoor. Wishing her luck when she had begun her journey as an assistant director, Shanaya's proud parents, Maheep Kapoor and Sanjay Kapoor had written, "My baby’s gone to Lucknow for 2 weeks #MissYouAlready #AssistantDirectorsLife #LoveYou @shanayakapoor02 #ProudMama" and "All the best Shanaya #newbeginnings #newjourney." 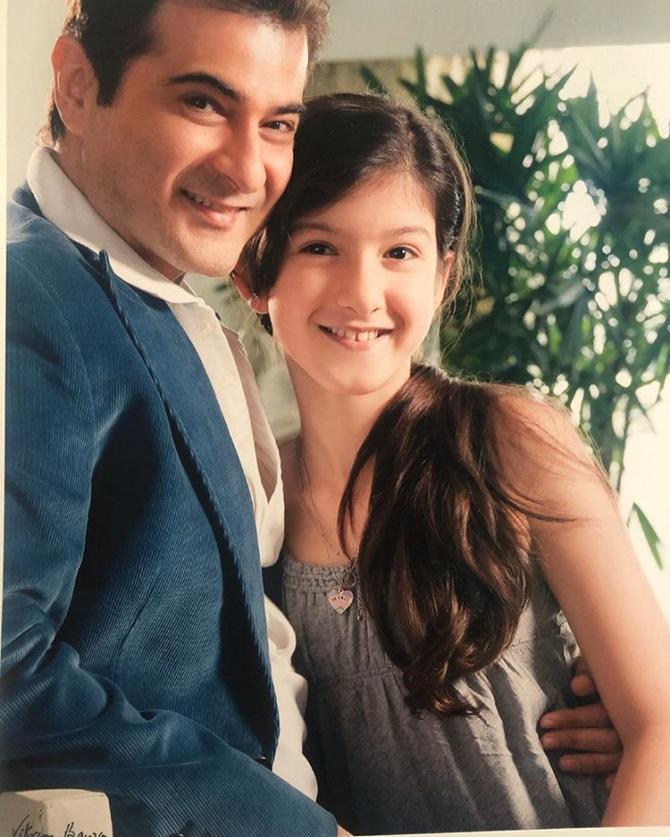 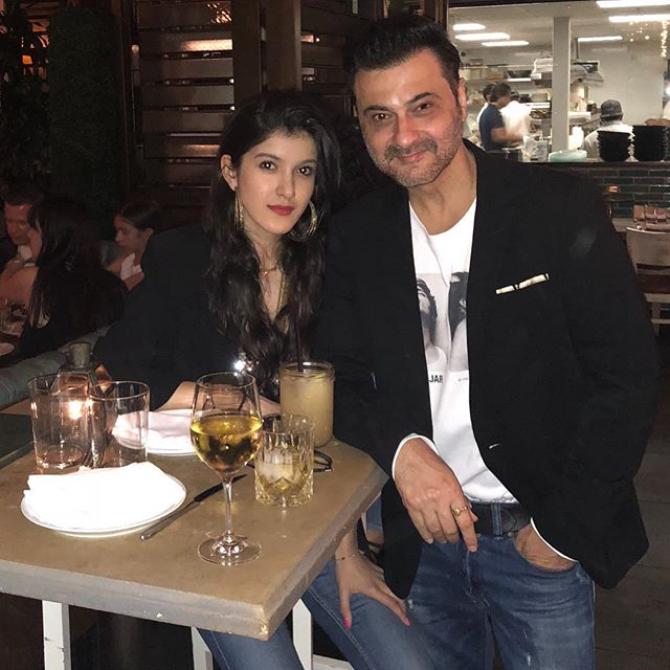 A few months back, Sanjay Kapoor had posted an adorable throwback picture of the sister squad of the Kapoor clan. Sanjay along with Janhvi Kapoor, Khushi Kapoor and Shanaya Kapoor could be seen cutting a cake as his wife, Maheep Kapoor stood by their side. The little sisters had their eyes stuck on their delicious chocolate cake and while Maheep was all hearts for the picture, Shanaya had commented on it, "@khushi05k ur ready to dive into the cake". To which, Sanjay had reacted with laughing emojis and Khushi had replied with heart emoticons. (Also Read: Hema Malini Reveals The Secret Of Her Beautiful Relationship With Dharmendra On His Birthday) 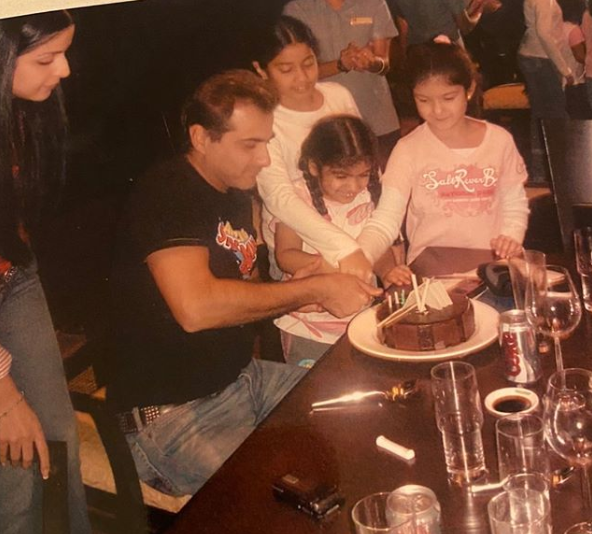 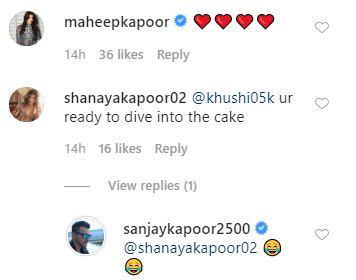