Ace tennis player, Sania Mirza is enjoying every second of her motherhood journey with her 'baby Mirza'. Check out as she shares a super cute glimpse of Izhaan helping her out!

The biggest gift for a woman is to hop on the motherhood journey. From being a teacher to a friend, from a caretaker to the only source of food and whatnot, she plays many different roles in shaping her child and turns him/her into a perfect human being. A child grows up to be a mother's best friend and a father's pride. And ace tennis player, Sania Mirza is enjoying every second of being a mommy to her little boy, Izhaan Mirza Malik. (Recommend Read: Sushmita Sen's Daughter, Renee Wants To Be Independent, Talks About Being Aware Of Her Privileges)

Sania Mirza and Shoaib Malik were the happiest when they had embraced the parenthood journey. It was on October 30, 2018, Sania Mirza and her husband, Shoaib Malik were blessed with a baby boy, whom they had named, Izhaan Mirza Malik. Sania, who is extremely close to her parents, had revealed in many media interactions that her son will take forward the name of 'Mirza family' too and this is the reason why she chose Mirza as her son's middle name. On January 6, 2021, Sania took to her Instagram handle and posted a super cute IG story of her baby boy. In the video, we can see her son, Izhaan holding trolley as he helped his amma in shopping. Atop it, Sania wrote, "Groceries for the week. P.s: Pony is back @izhaan.mirzamalik." Check it out below: 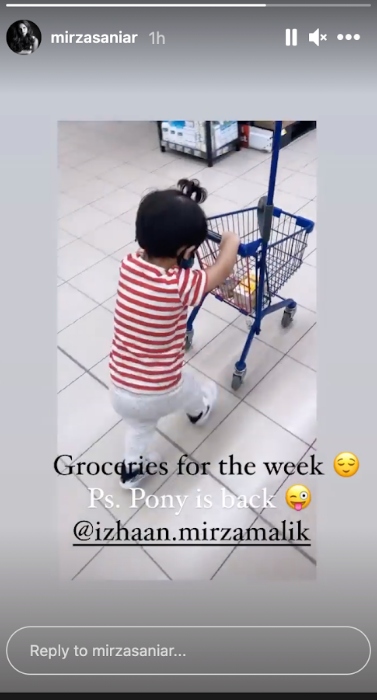 During the lockdown, Sania had shared an adorable picture with her son, Izhaan, which was clicked before one of her big matches. Alongside the picture, Sania had written a note that could be read as "My life in a picture! I wouldn’t have it any other way Allhamdulillah! This is right before we played the tie against Indonesia to make the world group playoffs for the first time @fedcuptennis. He inspires me the most to do what I do and be the best I can be." (Also Read: When Amitabh Bachchan Lost His Temper At Jaya Bachchan Post An Interview About His Affair With Rekha) In an interview with Pinkvilla, Sania had talked about embracing motherhood, and had stated, “A lot has changed after becoming a mother, your life changes, I think the whole focus becomes about the baby and prioritising the baby. Me as a working woman, I obviously want to get back to tennis, so I am trying to prioritise my time. It is the most selfless kind of love I have ever known, and it is the most amazing feeling I have ever had. My life has completely changed for the better. Ya, Shoaib is also playing quite a lot and is travelling so he does help whenever he can."

Sania had also talked about her experience of staying away from her husband, during the COVID-19 pandemic in an interview with The Indian Express. She had stated that her husband, Shoaib had gotten stuck in Pakistan, and she was in India. It became a lot difficult for her to manage it all because they have a small child. (Don't Miss: Mona Singh Enjoying Snow-Therapy In Manali With Hubby Shyam Rajagopalan Will Have You Pack Your Bags)