Television actress, Sanaya Irani penned a lovely note for her 'saasu-ma' as she turned a year older. Check out Sanaya's cute picture! 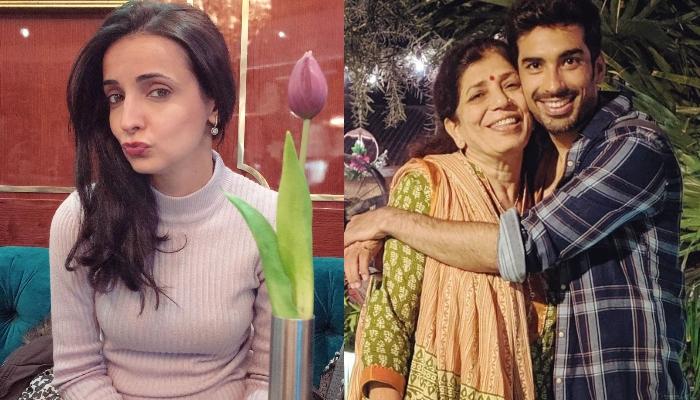 Gone are the days when a mother-in-law was considered a scary being! Nowadays, a mother-in-law is just like a mother and she tries to give the best to her daughter-in-law. Believe it or not, but behind every successful married woman, stands an extremely wonderful mother-in-law, who had encouraged her bahu to follow her passion without thinking about the responsibilities of a home. No matter how complex or easy your realationship with your MIL is, she holds a special place in your heart. And television actress, Sanaya Irani shares a similar bond with her mom-in-law. (Recommend Read: Mom, Natasa Stankovic Enjoys A Car Ride With Her Baby, Agastya Pandya, He Chooses To Do This)

Before we take you further into the story, let us take a look at Sanaya Irani and Mohit Sehgal's love story. The duo has been giving us relationship goals ever since they had worked together in Miley Jab Hum Tum as colleagues. They became audience's favourite jodi and everyone had celebrated with them when they had gotten married in a beach wedding on January 25, 2016.

On October 14, 2020, Mohit's mother turned a year older, and the doting bahu took to her Instagram handle to wish her MIL. The actress shared a beautiful family picture. In the picture, we can see Sanaya giving a peck on her mom-in-law, while Mohit was seen giving a kiss to his daddy. The beautiful picture narrated the story of Sanaya's bond with her saasu-ma. Alongside the picture, Sanaya wrote, "Happy Birthday @poojasehgal1410 love you." Check it out below:

Mohit also took to his Instagram handle and shared a cute note for his mom on her birthday. He shared two pictures with her mom from a family function and the mother-son duo can be seen posing for the camera. Along with it, Mohit wrote, "Happy Birthday mumma. Love you. Miss u so much, wish I was there. May baba ji give you all the happiness and you always stay healthy." (Also Read: On Sushant Singh Rajput's Death Anniversary, Shweta Singh Kirti Deletes Her Social Media Handles)

Coming back to Mohit and Sanaya's love story, in an interview with Pinkvilla, the duo had shared the details of their beach wedding and how they had planned it all. Mohit had shared how Sanaya always wanted a beach wedding and he had made her dream come true. To this, Sanaya had added, "I always wanted a beach wedding because I love the sea, the ocean, so I am a beach baby. I always thought of having a small intimate wedding by the beach where I will wear a simple dress and take our vows. But Mohit is Punjabi, so small and intimate was out of the question."

Earlier, in an interview with The Times of India, Sanaya had talked about her hubby's plans, and had revealed, "When I married Mohit, all that mattered was the person that he is. It’s okay if he is figuring out what to do. I believe that luck and destiny play a big role in success. Mohit is not running away from acting, he is just waiting for the right opportunity. Also, he is currently focussing on an alternate plan. I have always told him that the luxuries, like a house and a car, are not important, but we are. I have seen how people would react to Mohit when he was famous and how they react to him today. But that doesn’t affect me; the fact is that I go back home with him and none of those people do." (Don't Miss: Randhir Kapoor Misses 'Food And Booze' With Late Brother, Rishi Kapoor, Recalls Time Spent Together)