Sana Khan shared her 'mehendi' ceremony pictures and her outfit is surely going to be the next trend for every bride-to-be. Check out the pictures inside! 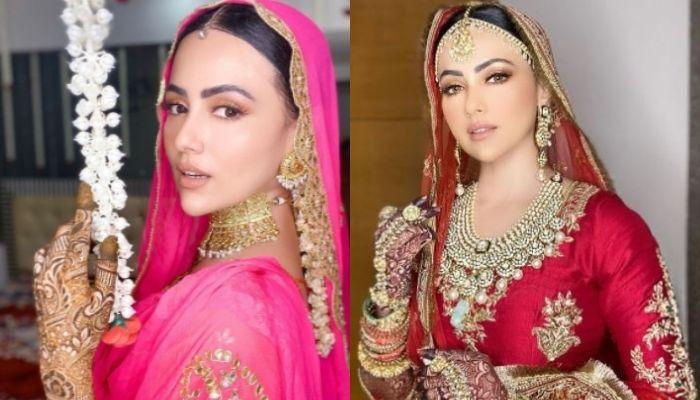 Some weddings come as a big surprise and Sana Khan’s wedding was one of them. Sana Khan had begun her career in modelling and had appeared in several advertisements, along with Bollywood and regional films. In 2012, Sana had participated in the reality show, Bigg Boss and had become a finalist. It was in early 2020 when she had announced her breakup with choreographer, Melvin Louis. And some days back, Sana had quit the showbiz and had announced the same on her social media handles. Later, her wedding with a Maulana had shocked the entire nation. (Also Read: Neha Kakkar Shares A Lip-Lock Video With Hubby, Rohanpreet From Honeymoon On First Month Anniversary)

Sana Khan had found her 'Mr Right' in a Maulana and had tied the knot with Mufti Anas from Gujarat on November 19, 2020, in a hush-hush wedding. Her wedding has become the talk of the town as everyone is still under shock, seeing the transformation in Sana. However, she is enjoying the new phase of her life and has been sharing pictures from her wedding ceremonies. Now, Sana has shared pictures from her mehendi ceremony and we are sure that her outfit will set a new trend.

After her wedding with Mufti Anas Sayed from Gujarat, Sana Khan had changed her name to Sayied Sana Khan and since then, she has been sharing glimpses from her wedding functions. On November 25, 2020, Sana had taken to her IG handle and had shared gorgeous pictures of her Walima look from her wedding. Sana had looked stunning in a custom hand-embroidered lehenga with dupion crepe and gotta patti border on her dupatta. She had completed her lehenga with matha patti and heavy jewellery with intricate details. Sana had later posted a Reel, flaunting her makeup and blushing with happiness. (Don't Miss: Shilpa Shetty's Hubby, Raj Kundra Shares A Selfie With Her, Pens An Advice For Every 'Single' Person)

On November 22, 2020, Sana had taken to her IG handle and had shared a picture with her groom, Mufti Anas from her wedding. Along with the picture, she had written, “Loved each other for the sake of Allah. Married each other for the sake of Allah. May Allah keep us united in this Duniya. And reunite us in jannah. Fabi ayyi ala-e rabbekumaa tokazzebaan. Which of the favours of your lord will u deny. #sanakhan #anassayed #nikah #married #20thnov #alhumdulillah."

After the news of Sana Khan’s hush-hush wedding to a Maulana in Gujarat had come out, people had started comparing her to Sofia Hayat, citing that Sana's spree of spirituality won't last long just like Sofia Hayat's. For the unversed, Sofia Hayat had quit the showbiz in 2016 and had become a nun adopting the name, Gaia Sofia Mother. However, she had quit that path after a year. Netizens had trolled Sana brutally for her decision.

Sana Khan had quit the world of entertainment citing religious reasons. The actress had announced her decision by sharing a long letter, in which she had expressed her thoughts and happiness on embarking her spiritual journey. She had posted the same on her IG handle and had captioned her post as "My happiest moment. May Allah help me n guide me in this journey. Aap sab mujhe dua Mai Shamil rakhe." (Recommended Read: Gaurav Chopraa Celebrates His Late Parents' Golden Anniversary, Shares His Dad's Letter For His Mom)

Bollywood actress, Sana Khan, who was shot to fame with her brief stint in Salman Khan's Jai Ho and had also appeared in the house of Bigg Boss had shocked everyone with her overnight decision of leaving the showbiz forever. Not only this but after leaving Bollywood, Sana Khan had