Samantha Akkineni and Naga Chaitanya are one of the most loved celebrity couples. Recently, the doting wife posted a flirtatious comment on her hubby's picture and it was a pure dose of love.

If there is one couple in Tollywood we swear by, then it is none other than Samantha Akkineni and Naga Chaitanya. Although the two are completely opposite to each other, their love for one another knows no bounds. From being colleagues to friends to being a couple and now husband and wife, Samantha and Chaitanya are one of the most loved celebrity couples in the glamour world. And their fans love watching their cute social media banters. (Also Read: 'Naagin' Fame, Mouni Roy To Tie The Knot With Dubai-Based Banker Beau, Suraj Nambiar? Details Inside)

When superstar Chiranjeevi’s son, Naga Chaitanya was cast opposite Samantha Ruth Prabhu in the romantic film, Ye Maaya Chesave, the two had never thought that their on-screen pairing will turn into something more precious. It was in 2015 when rumours of Chay and Sam had started surfacing and it had gotten more mileage when she had revealed that she had found her prince charming. After knowing each other for 8 years, the duo had tied the knot on October 6, 2017. The couple had first gotten married according to traditional South Indian ritual and later in a Christian wedding. 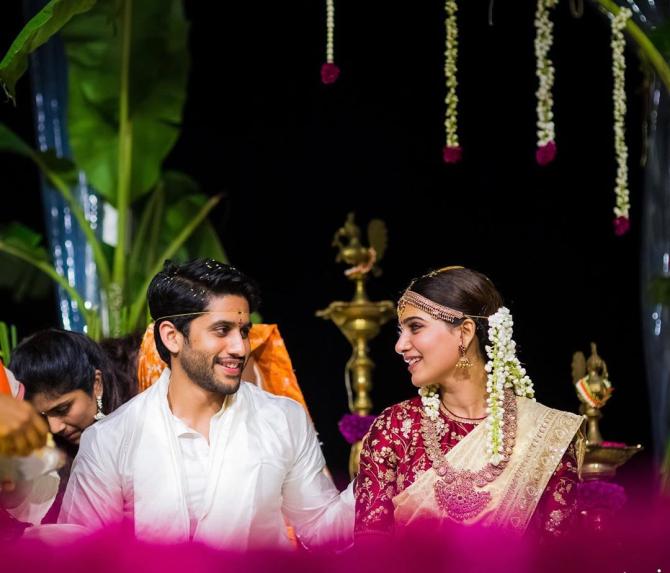 Samantha Akkineni is quite active on social media, whereas Naga Chaitanya loves keeping his life away from social media. However, recently Chaitanya shared a candid monochrome picture of himself on his IG handle and it was Samantha’s comment that was unmissable. In the picture, taken from the sets of one of his films, Chaitanya seemed lost in his thoughts and his doting wife was quick to comment on it. She flirtatiously wrote, “Are you thinking of me?” followed by a love-struck emoticon and it just made our day. This is not the first time when we are witnessing Samatha’s cute social media banter with Naga Chaitanya. On May 21, 2020, Samantha Akkineni and Naga Chaitanya had attended the roka ceremony of his cousin, Rana Daggubati with Miheeka Bajaj. On May 22, 2020, Samantha had taken to her Instagram handle and had shared a solo picture of her handsome husband, Naga Chaitanya. Along with the picture, she had written a romantic note which could be read as “After sending mommy, aunties, sister, friends, very straight male friends it’s now Instagram’s turn ... 'See eee my husband looks so handsome no???? (husband is somewhere digging a large pit to jump into right now).” And it was Naga’s comment on his wife’s post that was unmissable. Naga had written, “Okay now…this looks like one of those paid partnership posts.” (Also Read: Gauahar Khan And Zaid Darbar Jet Off For A Vacation, He Shares Adorable Pictures With His Ladylove) 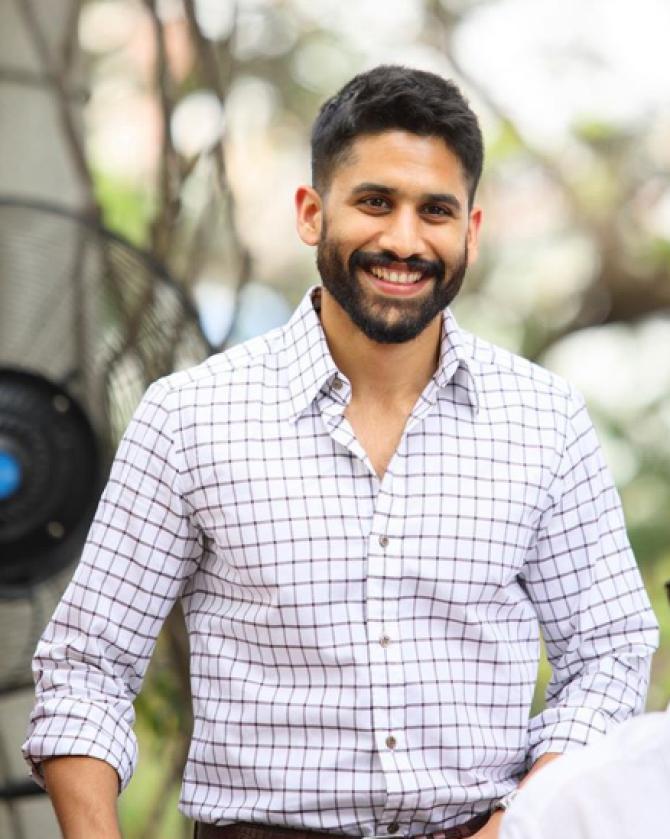 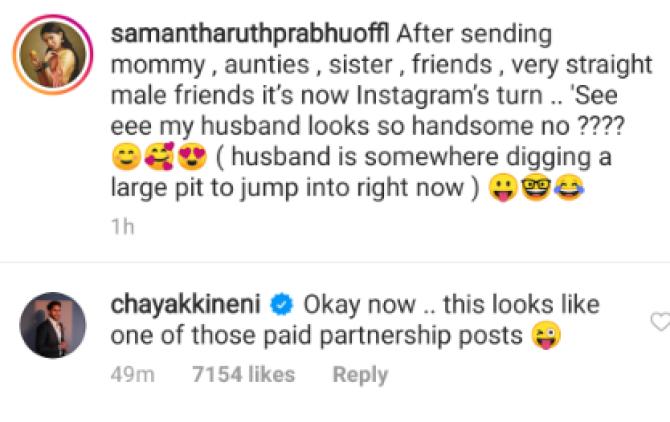 Some months back, Samantha had featured on the chat show, Zoom Happy Space and had revealed some details of her personal life. She had talked about her relationship with Chaitanya and had stated, “I am all kinds of weird but he makes me into the stable kind of weird." Samantha had also shared how she convinces Chaitanya before posting his picture of her social media handle and had said, “If I have to put up his picture on my social media, I have to give him one month notice or he has to be in a really good mood." Do you know, it took 8 long years for Naga and Samantha to confess their feelings for each other? Talking about the same in an interview with Famously Filmfare, Samantha had once stated that the time was never right in their case. When she had really liked him, he was not in the right space and when he had started responding positively, something or other had happened. She had retorted that it took them 8 years to come on the same page. But when they did, all the fans of Chay and Sam couldn’t hide their happiness. (Also Read: 'Tandav' Actor, Saif Ali Khan Talks About Embracing Parenthood Again With Wife, Kareena Kapoor Khan) 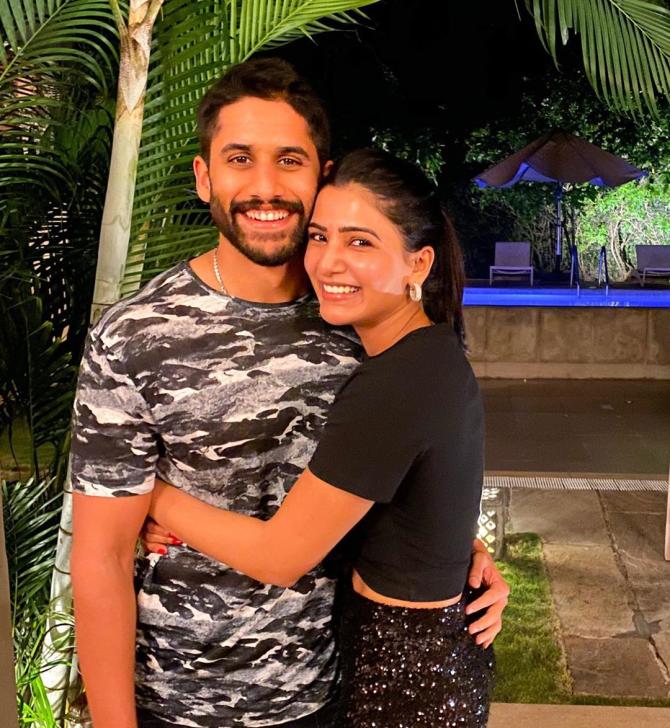 Aren’t Samantha and Chaitanya made for each other? Let us know.

Naga Chaitanya To Move Into A Swanky New House, Samantha Will Continue Living In Their Old Mansion 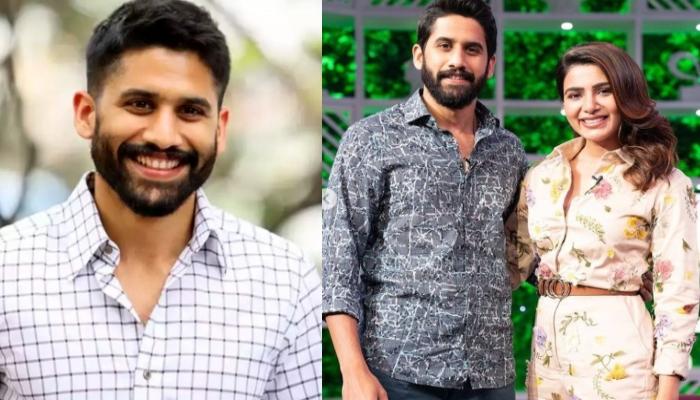 When the power couple of the South film industry, Naga Chaitanya and Samantha Ruth Prabhu, had announced their separation, it had come as the biggest shock to their fans. Reports of trouble in their marital life had been doing the rounds for the past few months. Her absence from her father-in-law,