After years when you have a kid in the house, all your attention gets diverted to the baby! From keeping cute nicknames, time and again calling up the mommy and daddy of the adorable munchkin to specifically ask about the baby, to you finding a new partner for all those adorable social media pictures, having a baby in the family is happiness and excitement to another level! (Do Read: Mihika Varma's Brother Mishkat Varma Enjoys Video Chat With His Four-Month-Old Nephew Izaan Kapai)

Similar is the story in the Khan household! Ever since, Arpita Khan Sharma delivered a baby boy, he has truly become the family’s ‘apple of the eye’! From being pampered by papa, Aayush Sharma to spending a gala time with his dearest mamu, Salman Khan, Ahil is deeply loved and adored by all. Be it giving a peck to Katrina Kaif, or staying put in Jacqueline Fernandez’s lap, the little kiddo is surrounded by love all throughout! Arpita, these days is taking onto social media to share Ahil’s fun diaries. In a one-of-a-kind fun playdate video of Ahil, the munchkin is seen enjoying his first-ever canvas painting session with Salman Khan. You will see him all smeared-up in paint as Salman teaches him more fun measures! Also, a glimpse of Ahil slipping in the canvas and falling down in paint, will make you go all ‘awww’! Sharing the video, mommy Arpita captioned the video as, “Ahil’s first painting on canvas escapade with Mamu @beingsalmankhan #lovetakesover #loveislove #blessed. Thank you @diekomirza for the lovely video”. Checkout:

Ahil’s father, Aayush who is all geared-up for his debut film, Loveratri, is back home with his family after a series of promotions. As per a recent ‘awww-dorable’ video uploaded by Arpita Khan Sharma who had turned photographer for the night, we can see the super-cute father-son duo, Aayush and Ahil in a complete playful mood, super-ecstatic to have each other’s company. As you see the adorable video of them playing with a ball, don’t forget to take a look at Arpita Khan’s cute caption which said, “@aaysharma making up for the lost time! Father & son craziness #lovetakesover”.

The Khan family also seems to make the most out of Ahil’s presence. In an adorable video posted by Salman Khan on Twitter last year (2017), the Kick star is seen having a gala time with his nephew. The morning-scene video has Salman and Ahil on the breakfast table. As soon as Salman opened his mouth to be fed by Ahil, instead of feeding the morsel to his mamu, he put it in his mouth and the entire household broke into a crazy laughter! Here’s the video:

Arpita is extremely close to her brothers and has time and again shared how protective they are, about her. In an interview, Salman shared about how Aayush came into films and what happened when sister Arpita said that she wanted to marry him. He had shared, “We brothers wake up late. And all such proposals came early in the morning. We were (that time) making a film titled My Punjabi Nikah, that’s still under production. So we were looking for a new boy. After a month Sohail said ‘I’ve seen a guy in the gym. He is the ideal casting for My Punjabi Nikah.’” (Don't Miss! Chahatt Khanna Celebrates Daughter Zoharr's Birthday In A Pink-Themed Bash, Ex-Husband Not Invited) He further added, “I said that’s great, let’s sign him. But then that guy simply vanished and reappeared after three months. We met that guy (referring to Aayush Sharma) at our home when our sister (Arpita) brought him and said I want to marry him. We agreed, and then Sohail told me, ‘remember I told you about that boy at the gym for that film? He’s the boy!’ I said ‘great, now our film will be made for free.’ So nepotism doesn’t suit him! (laughs)”

We love the entire Khan clan, don’t we? Also, how did you like the adorable video of Salman and Ahil? Drop us a message in the comments section below. 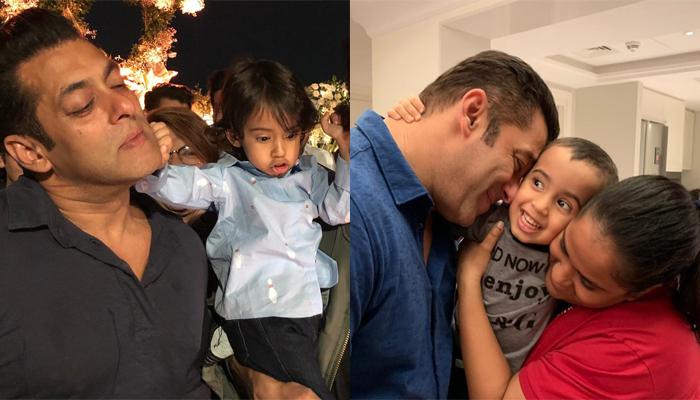 Celeb babies have been ruling the tinsel town like how and with the advent of social media, we regularly get our hands on our favourite celeb kids. After Taimur Ali Khan, Inaaya Naumi Kemmu, Laksshya Kapoor, Yash and Roohi Johar, and many others, the one celeb kid who can make