Aged 97+, Dilip Kumar’s health is a major concern for his family. Two sudden demises in the family had left everyone heartbroken and Saira Banu revealed why they haven’t informed Dilip Kumar about it. 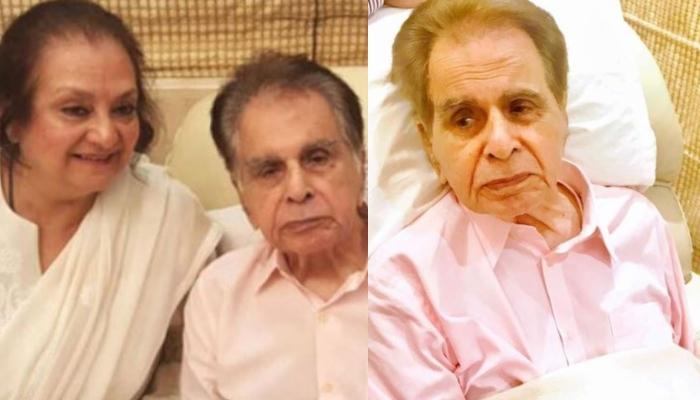 The Tragedy King of Bollywood, Dilip Kumar needs no introduction! Known for bringing realism to film ever since his debut, Dilip Kumar is of the greatest living legends of the Indian film industry and his love story with his fan-turned-wife, Saira Banu. Born in the Qissa Khawani Bazaar area of Peshawar, British India (modern-day Khyber Pakhtunkhwa, Pakistan), Dilip Kumar is one of 12 children of Ayesha Begum and Lala Ghulam Sarwar Khan. Aged 97+, Dilip Kumar’s health is a major concern for his family and they are trying their best to keep him away from the heartbreaking news. (Also Read: Shweta Singh Kirti Recalls When She Had Come To India To Watch 'MS Dhoni' With Sushant And Family)

On August 15, 2020, Dilip Kumar’s brothers, Ehsaan Khan and Aslam Khan were tested positive with the novel virus and were admitted to Lilavati Hospital, Mumbai. Six day after being admitted to the hospital, Aslam had passed away while Ehsaan had shown signs of recovery. But a few days later, Ehsaan too, had succumbed to the novel virus and had taken his last breath on September 2, 2020. While the two sudden demises in the family had left everyone heartbroken, Saira Banu revealed why they haven’t informed Dilip Kumar about the death of his brothers.

In an interview with The Times of India, Saira Banu revealed how they are keeping the disturbing news away from Dilip Kumar, due to his health issues. Informing that they haven’t even told Dilip Kumar about Amitabh Bachchan being tested positive with the novel virus, Saira Banu stated, "To tell you the truth, Dilip saab has not been told that Aslam bhai and Ehsaan bhai are no more. We keep every kind of disturbing news away from him. We didn't even tell him when Amitabh Bachchan contracted COVID-19 and was admitted in Nanavati Hospital; he's very fond of Amitabh." Updating about his health condition, she continued, "Well, he is confined. Quarantine as such is the first priority. But he has had a few changes in blood pressure due to dehydration recently and he's taking treatment." (Also Read: Rare Throwback Picture Of Sridevi Kapoor Twinning In White With Baby Janhvi Kapoor And Khushi Kapoor)

Revealing that Dilip Kumar’s nephews, Imran and Ayub had carried out the last rites of Ehsaan Khan, and the battle with the novel virus, Saira Banu said, "We thought Ehsaan bhai would pull through. He battled it out for more than 2 weeks. His vital parameters were stable including his oxygen level after he was admitted in Lilavati. But suddenly yesterday around noon, there was a certain decline in his health about which I was informed by Dr Jalil Parkar, and then his condition deteriorated further towards the night. It is so terrible to lose both of them, almost together. We also lost a friend a few days back, again due to COVID-19; she was just 51 and full of life. COVID-19 is definitely some punishment being meted out by God. Never witnessed such a catastrophe before. The world over has erred and is paying a price. Let us now pray to God to forgive us."

Saira Banu has been Dilip Kumar’s constant pillar of strength and earlier this year, when there were reports of veteran actor suffering from severe backache, she had posted a video informing everyone about his health. In an audio note shared on Dilip Kumar’s official Twitter page, Saira Banu had thanked everyone for their wishes and had updated, “I’m so happy to tell all of you that Dilip sahab is a lot better. He had a severe backache and we had to go and check it out at Lilavati hospital. We checked it out and came back home. Everything is fine now with God’s grace and your best wishes. We are so grateful to you all.” Dilip Kumar’s family friend, Faisal Farooqui had also taken to Twitter to inform his fans about the actor’s health condition and had tweeted, “Dilip Saab is doing well. Please don’t spread rumours.” (Also Read: Riddhima Kapoor Sahni Pens An Emotional Note For Her Late Father, Rishi Kapoor On His 67th Birthday)

We pray health and happiness for Dilip Kumar and Saira Banu! While every Bollywood flick may be bubbling with the emotions of eternal romance, very few real-life celebrity couples can be remembered for lifelong devotion towards their partners. However, there's one couple, who holds a special place in the hearts of every generation. Yes! We are talking about the evergreen couple,