We spotted the 'Prince of Pataudi', Taimur Ali Khan doing something unlikely of his royal temperament, and we were as surprised as you will be when you know about it! 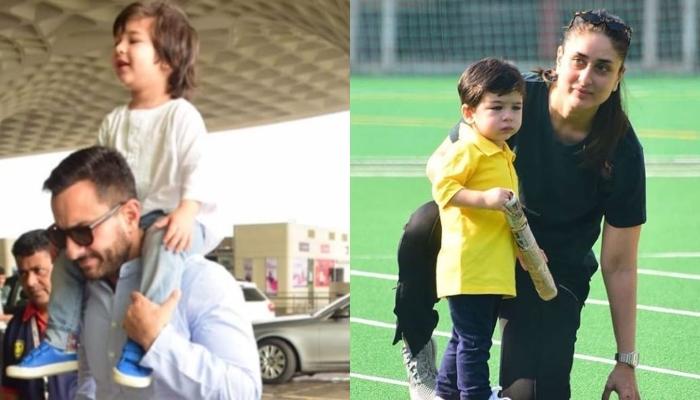 Bollywood superstars, Kareena Kapoor Khan and Saif Ali Khan's little munchkin, Taimur Ali Khan's popularity sees no bounds when it comes to his cute shenanigans which go viral on social media in no time. This time we spotted the 'Prince of Pataudi' doing something unlikely of his royal temperament, and we were as surprised as you will be when you know about it. Scroll down to know more! (Recommended Read: Nakuul Mehta And Jankee Parekh Announce Their First Pregnancy, Mom-To-be Flaunts Her Baby Bump)

Once in an interview with Bollywood Hungama, Saif Ali Khan had clearly stated that he wants his son, Taimur to become an actor in Bollywood when the actor was asked about his little goofball's future. He had said that he hopes Taimur finds a nice job when he grows up and that he would like him to be an actor. Well, we're all prepared for Taimur's debut in Bollywood. Aren't we?

We spotted some pictures of Saif Ali Khan along with his son, Taimur Ali Khan in the farm, mudding their hands away in the water. The father-son duo seemed to be enjoying themselves working on the farm. While Taimur looked cute in a white t-shirt, blue bottoms, Saif paired his t-shirt with a white pyjama. Taimur looked utterly happy playing in the water. Check out the picture below:

Some time ago, there were rumours that Saif Ali Khan and Kareena Kapoor Khan's little kid, Taimur Ali Khan will be making his debut in Bollywood in 2020. In an interview with the Hindustan Times, Saif had refuted all the rumours surrounding his little boy's entry into the films. He was quoted as saying, "I am really surprised. Some people don't know us well. I am very surprised that after 30 years of knowing us, people imagine that we would put Taimur in a film, or even allow that to happen in a nightmare scenario, or in an extended reality in the Twilight zone, or an episode of Black Mirror. There's just no chance on Earth. We are not like that."

As Kareena Kapoor Khan is expecting for the second time, in an interview with Zoom, she was asked about her husband, Saif Ali Khan's reaction to their second pregnancy. Bebo had revealed that there was no filmy reaction. Talking about the same, the actress had said, "Unfortunately in my house there is nothing filmy as such. Because Saif is very normal and relaxed. Of course, he is always happy to hear it. So like I said, it wasn't planned but it was something we really wanted to celebrate and we are really enjoying it together." (Also Read: Namrata Shirodkar Shares Rare Photo Of Hubby Mahesh Babu & Son Gautam With Their Family's Third Boy)

In an interview with Pride of Cows brand, Kareena had opened up on eating ghee on roti, and how her son, Taimur imitates her. Kareena had revealed, "The way I eat, my son has imbibed that because on the dinner table I have always said that 'Ghee lagao mere roti par ya chawal par'. So, now, he will ask me when I am feeding him, he will ask me all the time, 'Ghee daala, amma?'"

In an interview with Anupama Chopra, Kareena had talked about Taimur's reaction on becoming a 'bhaiya' and whether he is excited to welcome his little sibling. The actress had stated, "He is figuring out things. He is very ahead of his age. We never treated him like a kid. We treated him like an equal and adult. He is very friendly; a giving boy and I think he is ready." (Don't Miss: Kajal Aggarwal Surprisingly Reveals Whether She Will Take Her Hubby, Gautam Kitchlu's Surname Or Not)

We love Taimur Ali Khan's cutesy gimmicks! What about you?