On May 24, 2020, Sachin Tendulkar and Anjali Tendulkar had hit quarter-century in their married life and to celebrate 25 years of their journey as husband and wife, he had a special surprise for her.

The greatest batsman in history, Sachin Ramesh Tendulkar is regarded as the God of Cricket in our nation, who needs no introduction as he stays in the heart of every Indian. While everyone knows Sachin isn’t easily stumped on-field but one person, who did the unimaginable was none other than his wife, Anjali Mehta. Sachin and Anjali had managed to keep their personal life away from the media glare, and she has been his constant support in his journey of cricket. (Also Read: Priyanka And Nick Celebrate Their First Date, Share Their First Picture Together From Two Years Ago)

Way back in 1990 when a 17-year-old young boy, Sachin Tendulkar had seen Anjali Mehta for the first time at the Mumbai airport, and just how most love stories begin, they were struck by the Cupid on first sight. While Sachin was then making his mark in the cricket world, Anjali couldn’t resist his ‘cute looks’ when she first saw him. However, Sachin being a shy guy didn’t make the first move and it was Anjali, who had somehow managed to get his phone number. And as fate would have it, Sachin had picked up the call and then his story of the greatest and unbreakable partnership with Anjali had begun! Four years after dating, Sachin and Anjali had tied the knot on May 24, 1995, and are now living their happily ever after with two kids, Sara Tendulkar and Arjun Tendulkar. 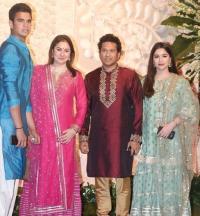 On May 26, 2020, Sachin Tendulkar and Anjali Tendulkar had hit quarter-century in their married life and celebrating 25 years of their journey as husband and wife, the former had planned something special for his family. Sachin donned the chef’s hat and surprised his wife and kids by making mango kulfi to mark the 25th anniversary. Sharing the recipe as an IGTV on Instagram, Sachin captioned his anniversary special video as “A (mango emoji) Surprise for our Wedding Anniversary. Made this Mango Kulfi as a surprise for everyone at home on our 25th wedding anniversary.”

Anjali Mehta had married the cricket legend Sachin Tendulkar, so the efforts she had to make to know the sport better to speak the same language as him and the sacrifices she had made to help him make this far in his career is inspiring and commendable. A doctor by profession, Anjali had decided to take a step back in her career to raise their family and let her man focus on the game is what we call selfless love. (Also Read: Renuka Shahane Shares An Unseen Wedding Picture With Hubby, Ashutosh Rana On Their 19th Anniversary)

During his farewell speech at the Wankhede Stadium in 2013, an emotional Sachin Tendulkar had stated, “I know Anjali being a doctor, there was a wonderful career in front of her. When we decided to have a family, Anjali decided to step back and say ‘you continue with your cricket and I’ll take responsibility of the family’. Without that, I don’t think I would have been able to play cricket freely and without any stress. Thanks for bearing with all my fuss and frustrations and all sorts of rubbish I’ve spoken. You’re the best partnership I’ve had in my life.” 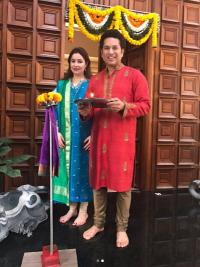 In an interview with Deccan Chronicle, Sachin Tendulkar’s childhood friend and former first-class cricketer Atul Ranade, recalled the day when Sachin had tied the knot with Anjali Mehta in a private ceremony. Recalling how the media was requested by the Tendulkar family to not intervene when the wedding is taking place and were promised that the newly-weds will come out for the photographs, Atul had said, “But I remember there were more reporters and photographers, some of whom had arrived from overseas, too, already gathered to cover the news at Worli’s Jewel of India. Sachin’s family had requested them not to be in the Jade Garden Banquet Hall, Near Nehru Centre in Mumbai where the wedding was to take place and to wait outside where they were assured that after the marriage the couple would pose for the photographs. One photographer, however, managed to enter the wedding hall although he was persuaded not to click photos.” 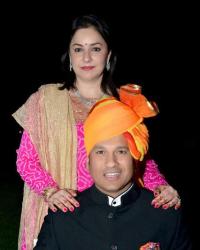 How the Tendulkars had kept the promise and soon after the wedding rituals had gotten over, Sachin Tendulkar and Anjali Mehta had come outside to greet the media, Atul Ranade had continued, “But Sachin kept his word. After they were wedded, Sachin and Anjali came out and seated themselves in the lounge for about eight to ten minutes, letting the photographers take as many photographs as they wished. Thereafter, Sachin and Anjali got into his car, and he drove her off to their home. Sachin had shown up in a silky, cream-coloured kurta, which had been tailored at a Hill Road boutique owned by Asha Bhosle, called Anja San. Anjali was in a red-coloured saree.” (Also Read: Kareena Kapoor Wishes Kunal Kemmu On Birthday, Posts An Unseen Picture With Soha, Taimur And Inaaya) 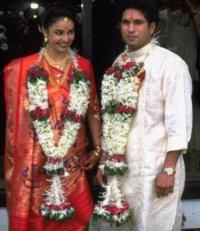 We wish an eternity of happiness and love to Sachin and Anjali!