The bride wore a salmon pink coloured lehenga adorned with stone studded exquisite designs on her wedding day and looked surreal. Read on as we decode her wedding ensemble.

In the last few years, there is a shift in people's choices, and the COVID-19 pandemic has completely changed the way weddings used to be. Earlier, a wedding was celebrated no way less than a grand festival, where extended lost relatives to friends were invited. And, apart from being the new beginning for a couple, a wedding then used to be a reunion of many people. But now, people prefer intimate ceremonies with close family and friends in attendance. However, what has never changed is the bride and groom’s wedding ensemble, which grab all eyeballs at the event.

Wearing the best ensemble for their special day has always been treasured in every couple’s heart. And for every bride-to-be who, used to stay outside India but wants customised designer outfits to match her Indian roots in her wedding customs and rituals, keep an eye on Sabyasachi Mukherjee’s wedding ensembles. The ace designer has garnered an enormous liking for his ensembles made out of an Indian touch by a super specialised team of designers. This was when we stumbled upon the Sabyasachi bride, who had opted for a salmon pink-coloured lehenga for her Anand Karaj ceremony.

Next Read: 10 Sabyasachi Brides Who Stole The Limelight With Their Minimalistic Lehenga On Their D-Day 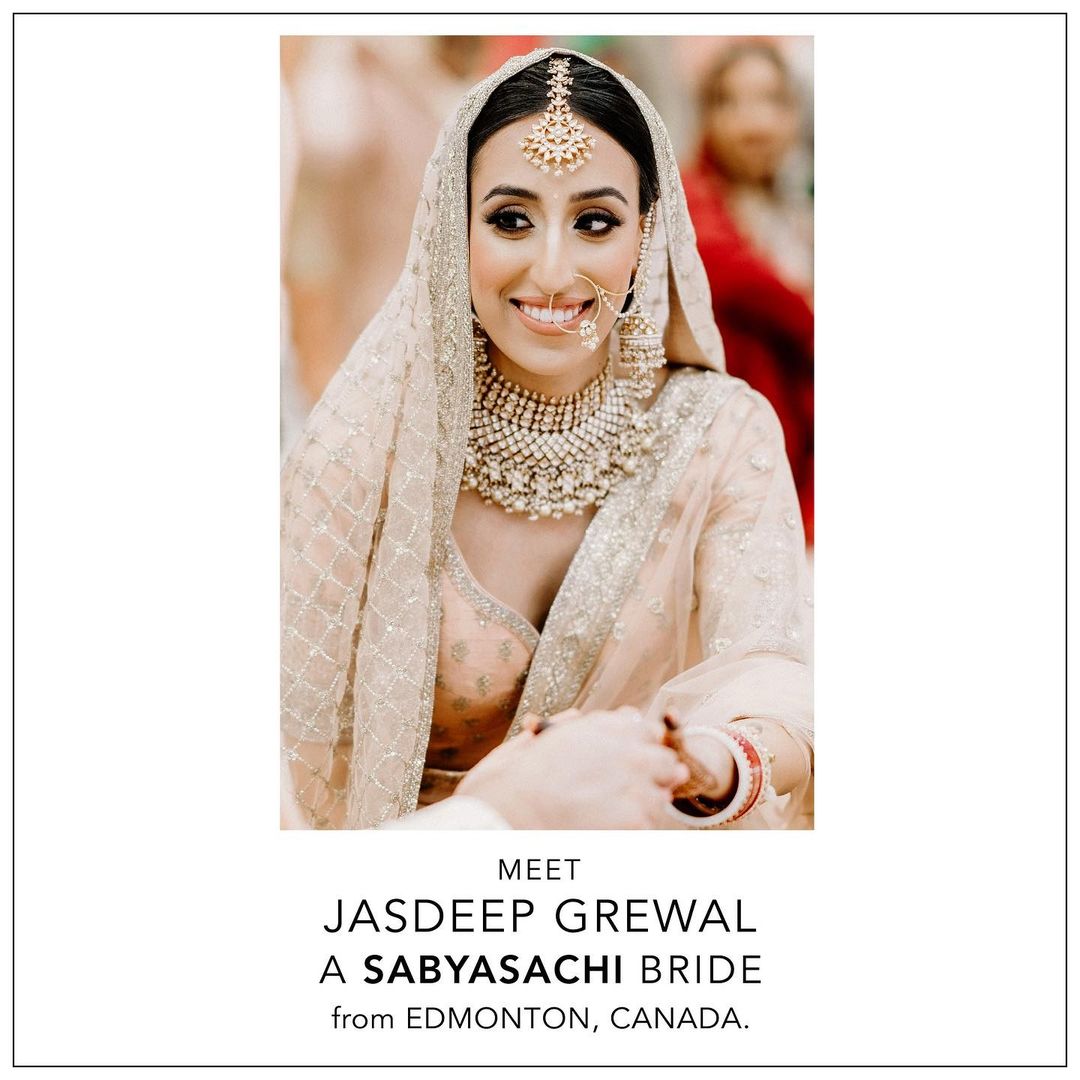 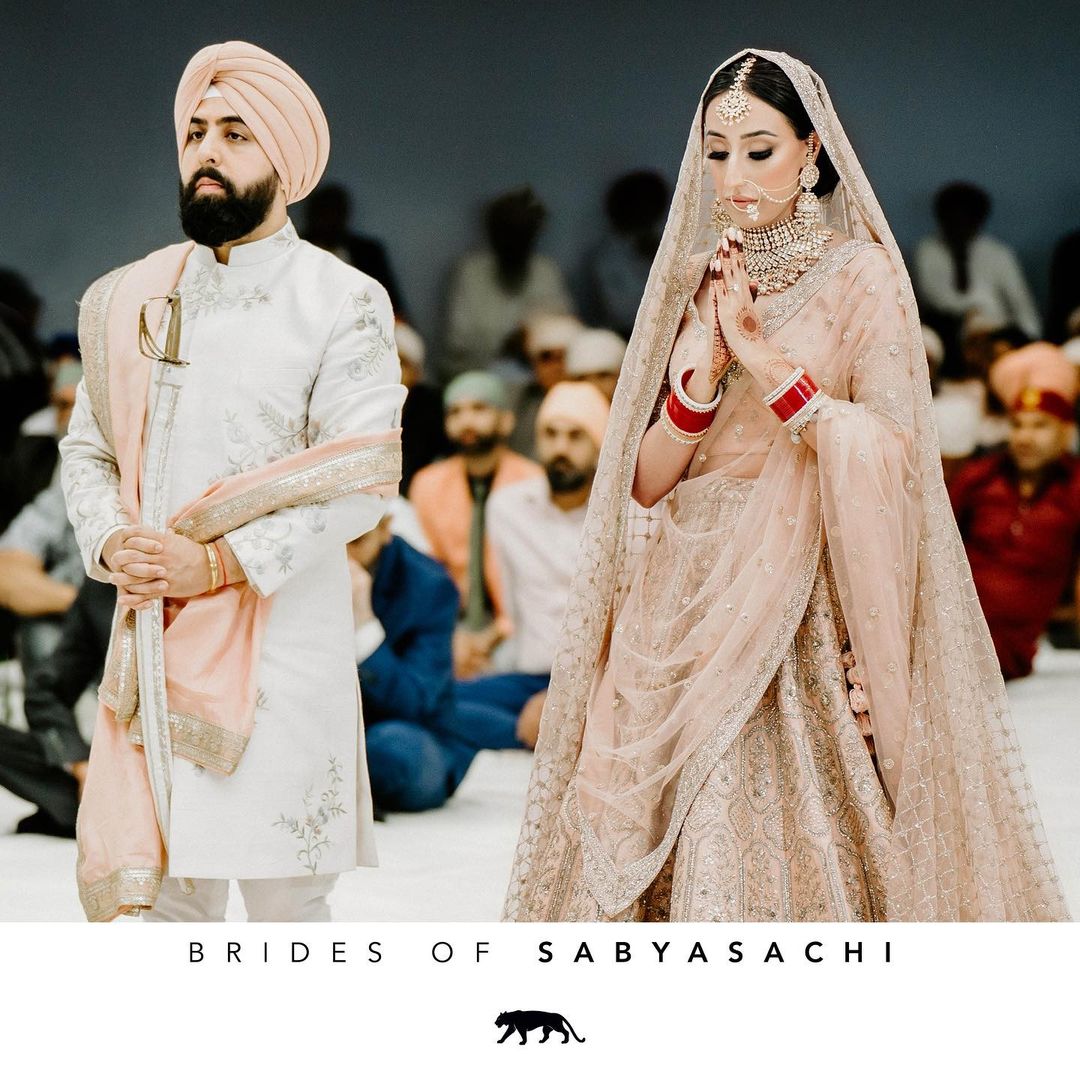 The bride of the week, Jasdeep Grewal, had styled a salmon-pink coloured lehenga from the shelves of the ace designer, Sabyasachi Mukherjee, for her wedding in Edmonton, Alberta. Jasdeep’s lehenga had featured stone-studded Raj-Gharana designs, which had included linear and intricate circular patterns all over it and had a broad silverish zari border. Along with it, her lehenga was also adorned with some latkans, that had made her outfit edgy. 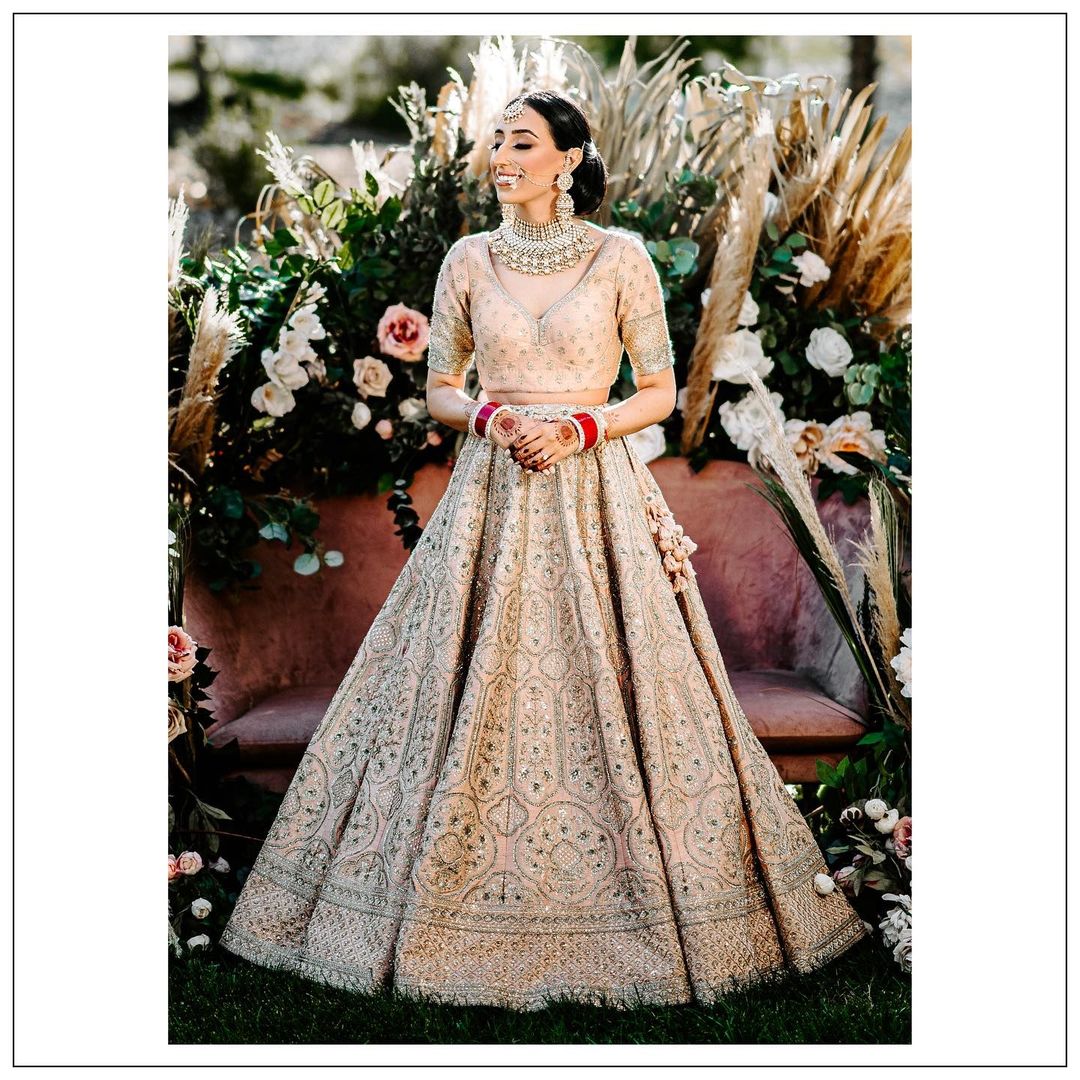 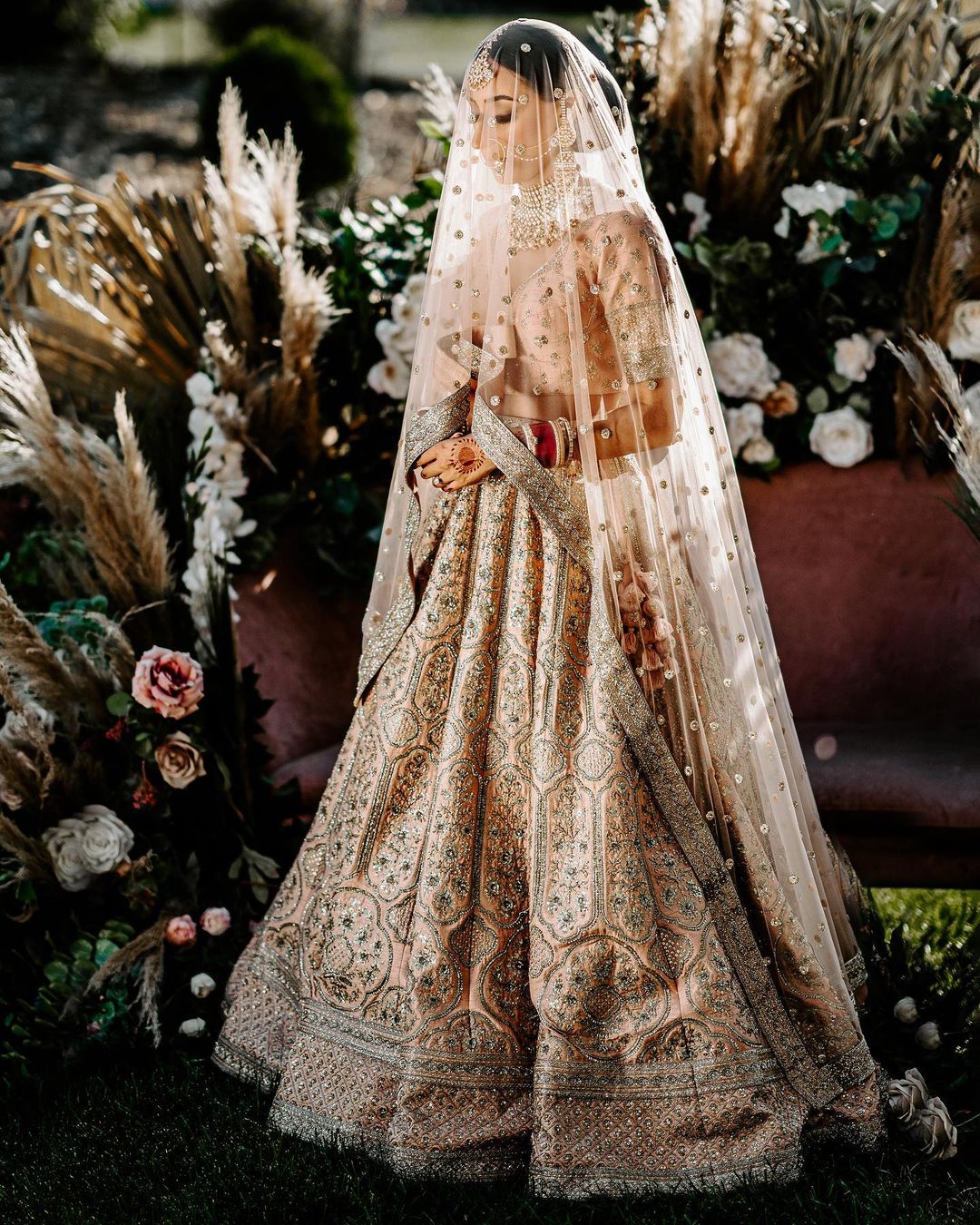 Jasdeep’s wedding ensemble had also featured a matching blouse with a princess-cut neckline, adorned with buti work and zari borders at the hemline of the sleeves. Along with that, she had paired her lehenga with a beautiful jaal-embroidered dupatta, which was tucked on her head and a net dupatta, embroidered with buti work, pinned on her shoulder.

Next Read: The Bride Donned A Sabyasachi Lehenga On 'Anand Karaj', Draped Nauvari Saree At Her Marathi Wedding 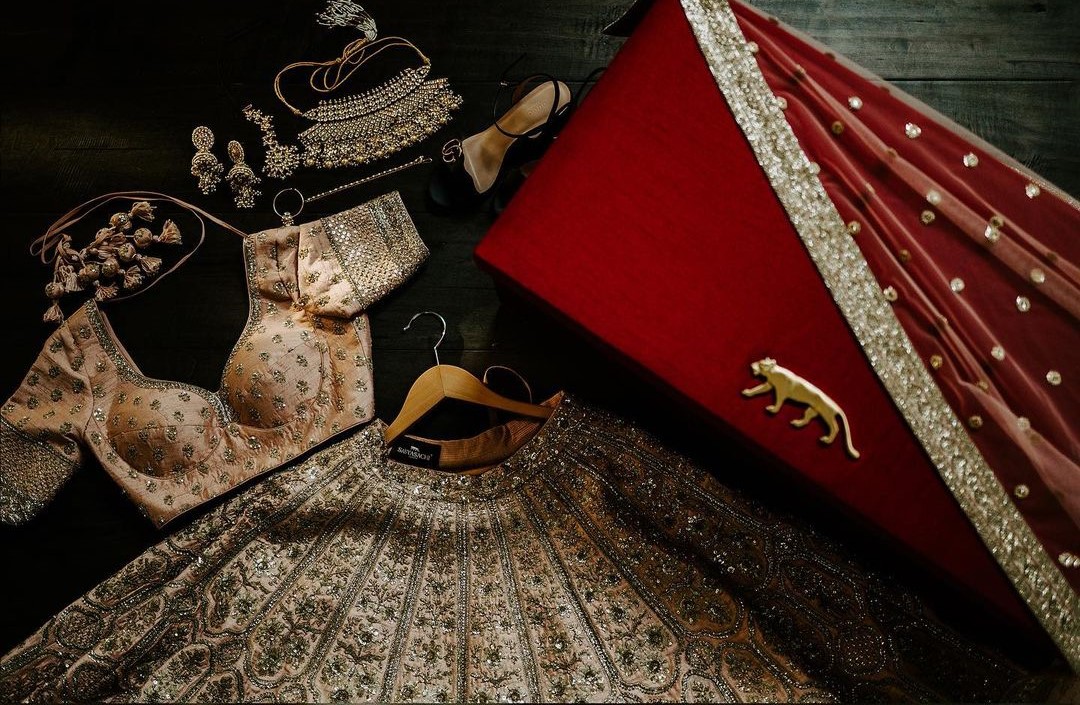 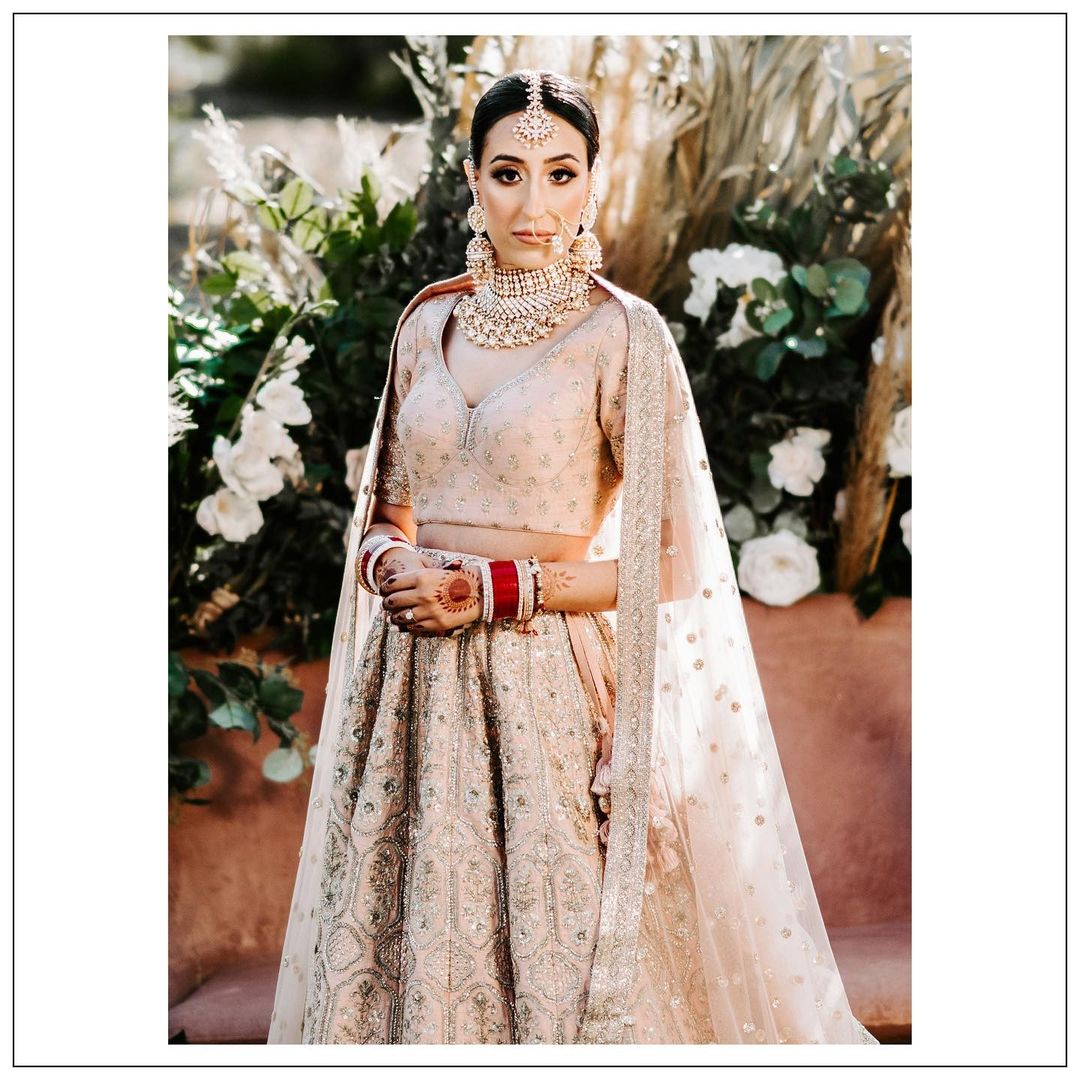 The bride had accessorised her look with unique white crystal jewellery set by Rahul Luthra, and it had utterly oomphed her overall look. She had opted for a heavy choker neckpiece, which had also featured pearl drops and tiny latkans attached to it, matching jhumkas, a nath, and a jaali patterned maang teeka. She had also flaunted her traditional chooda set and had looked gorgeous. 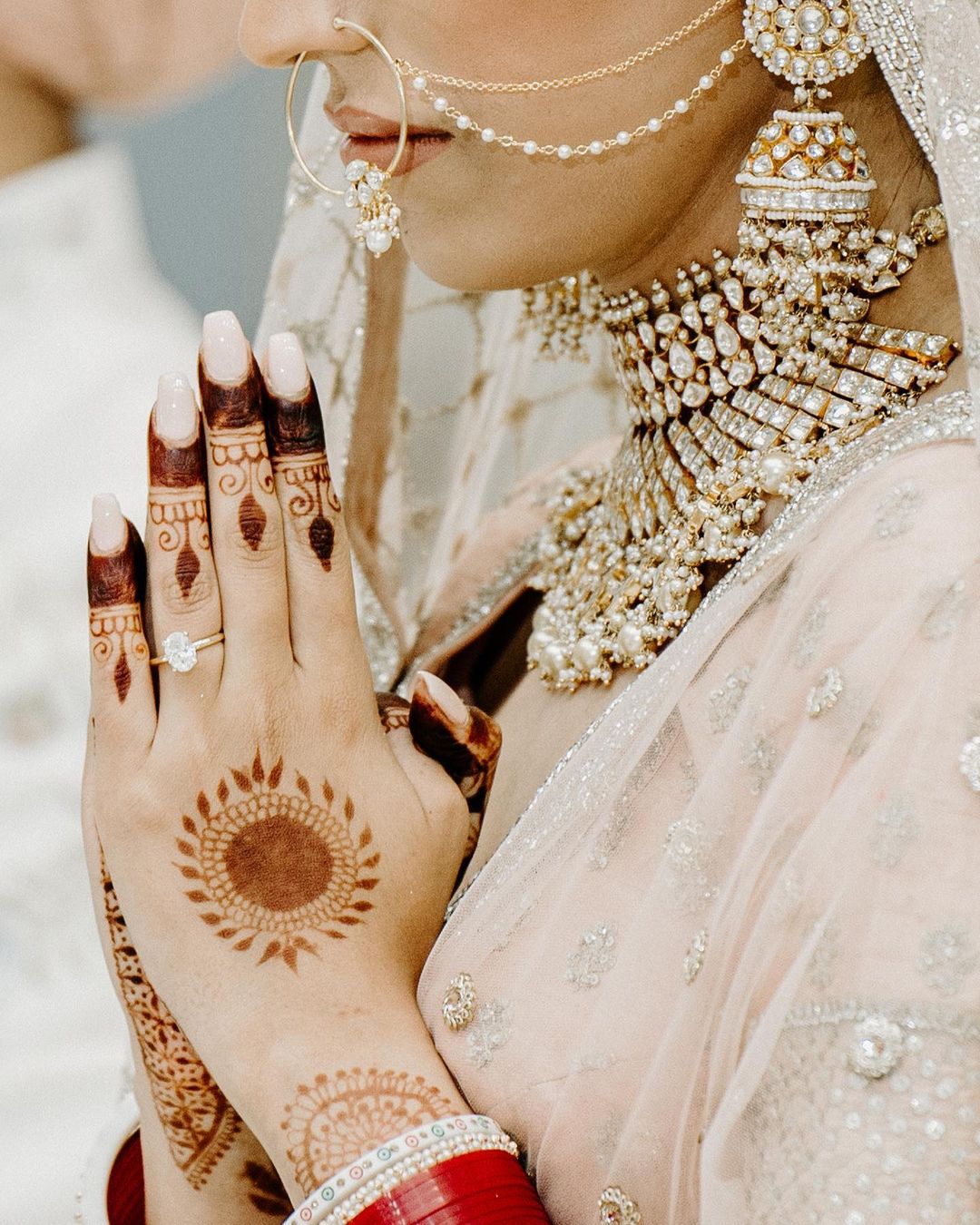 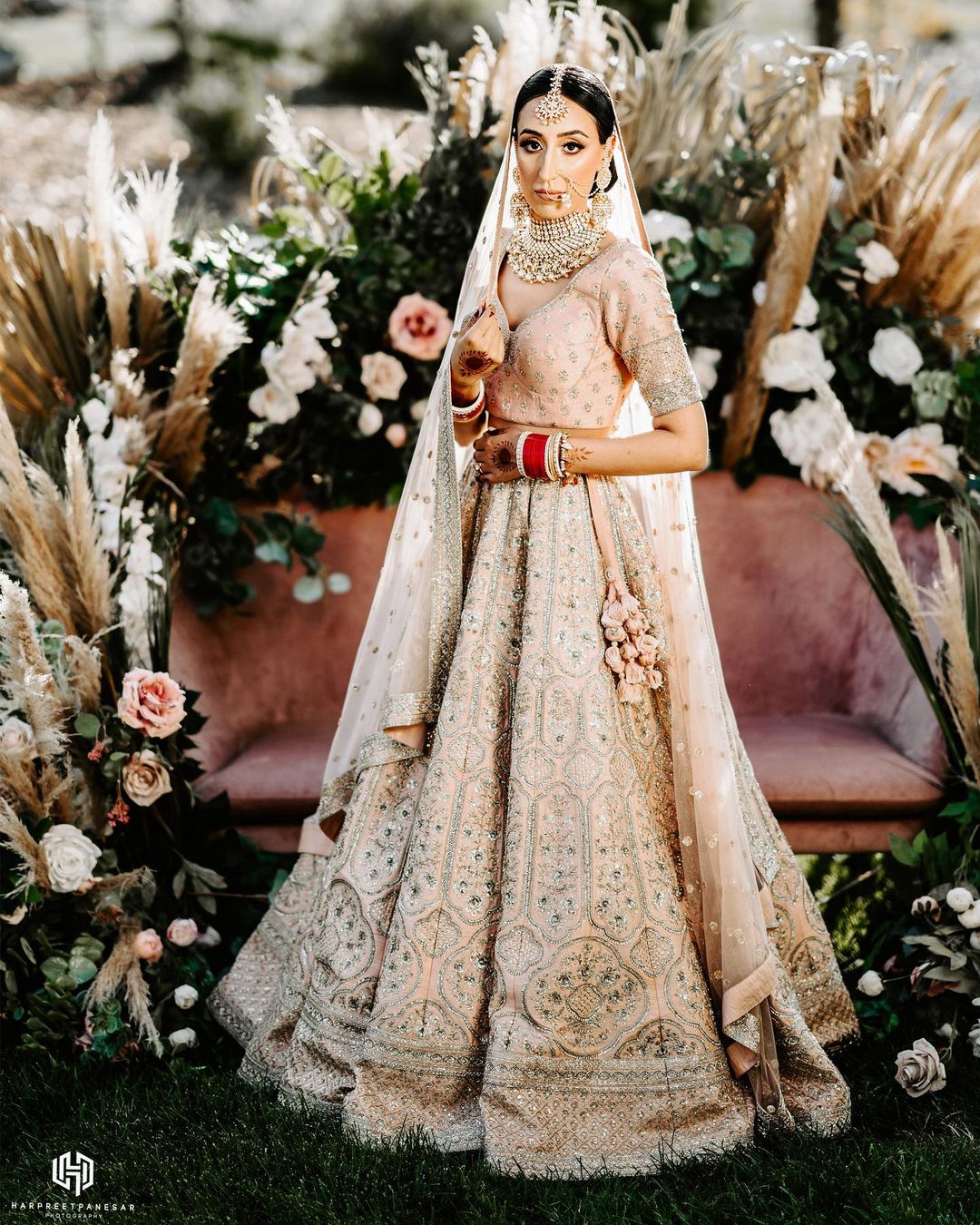 Jasdeep's makeup artist had given her a cut-crease-glam makeup that had highlighted her sharp features. She had opted for high defined-eyebrows, kohl-rimmed eyes with smokey brown finish, thick lashes, blush pink highlighted cheeks, nude pink lipstick and a silver bindi. She had also flaunted her mehendi with her makeup and had pulled up her hair in a middle-parted low bun and had looked elegant. 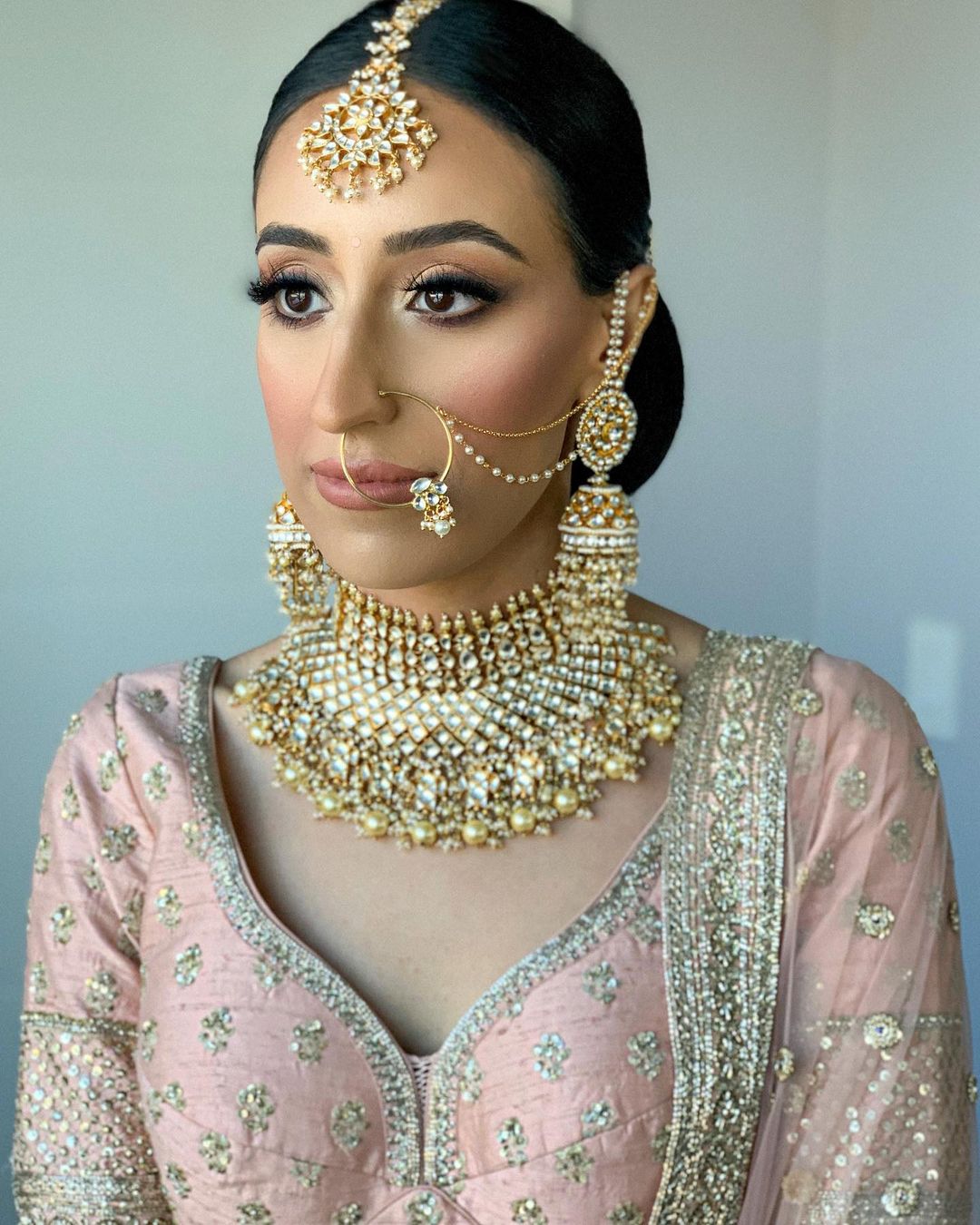 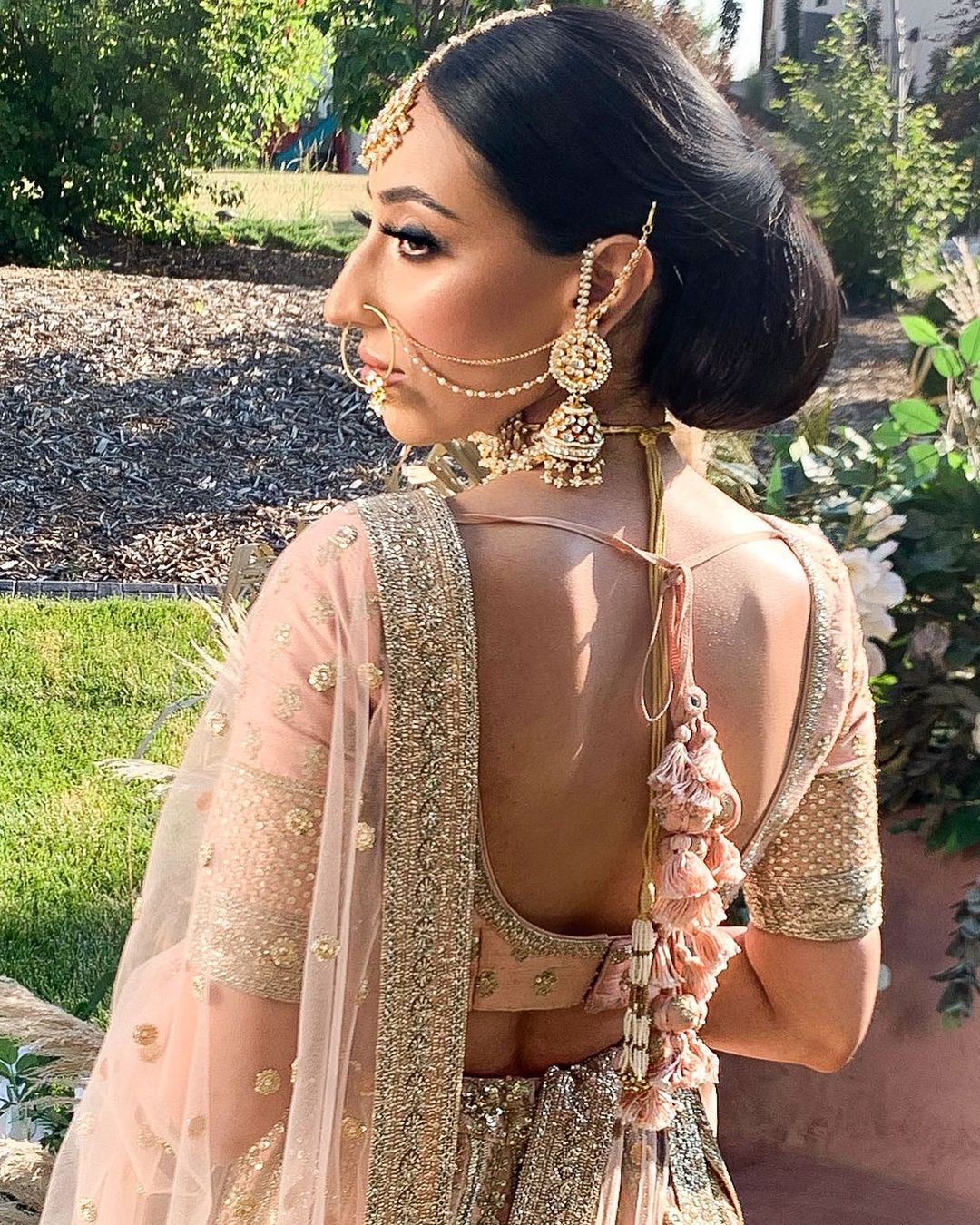 There is no doubt in the fact that Jasdeep Grewal’s groom, Harmeet Sadhra, had also put his total effort to complement his bride’s look on their d-day. He had opted for a white-coloured bandhgala sherwani with silver floral prints all over it. He had completed his look with a doshala and a turban matching with Jasdeep’s ensemble, and along with it, he had also donned white juttis and a sword. 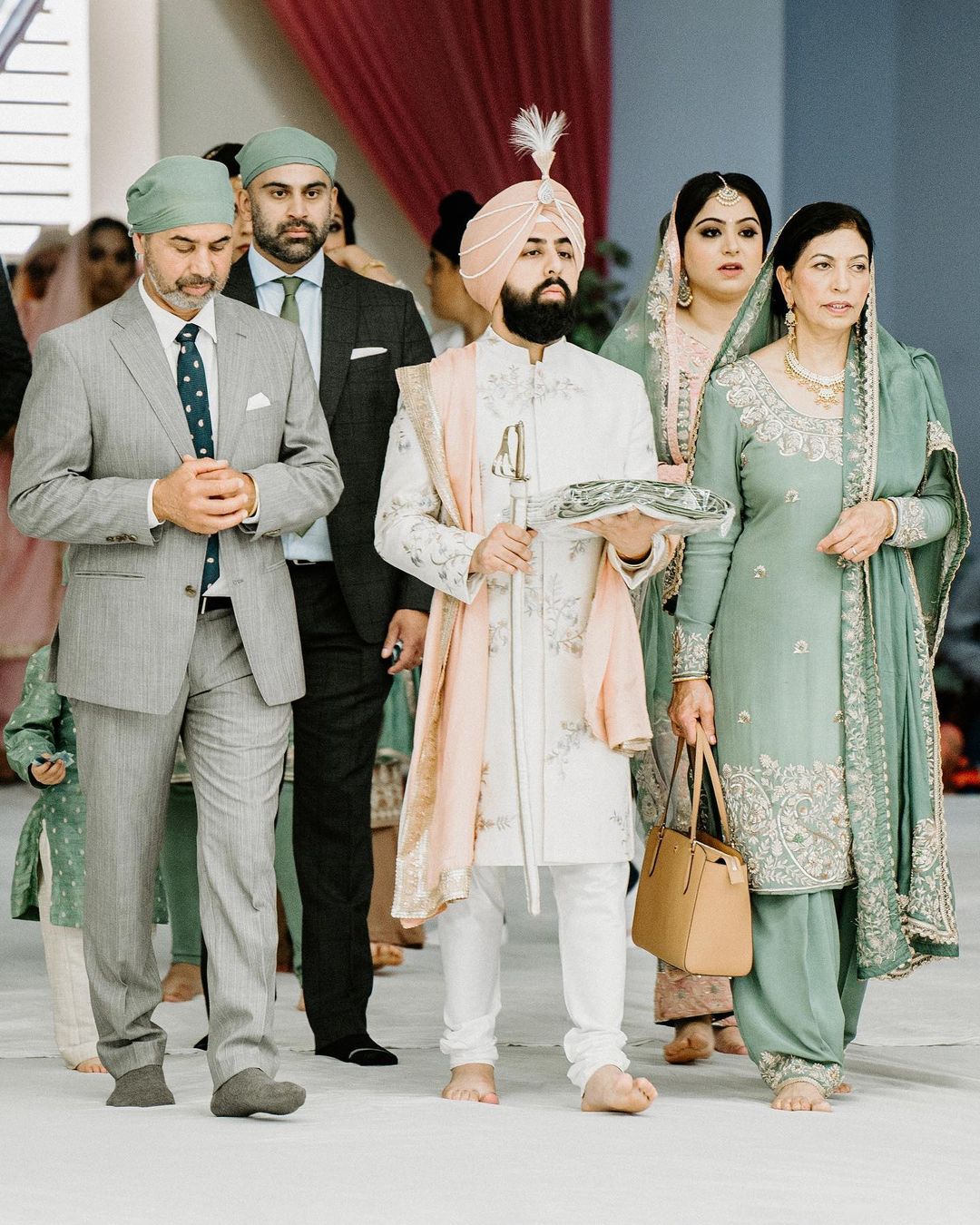 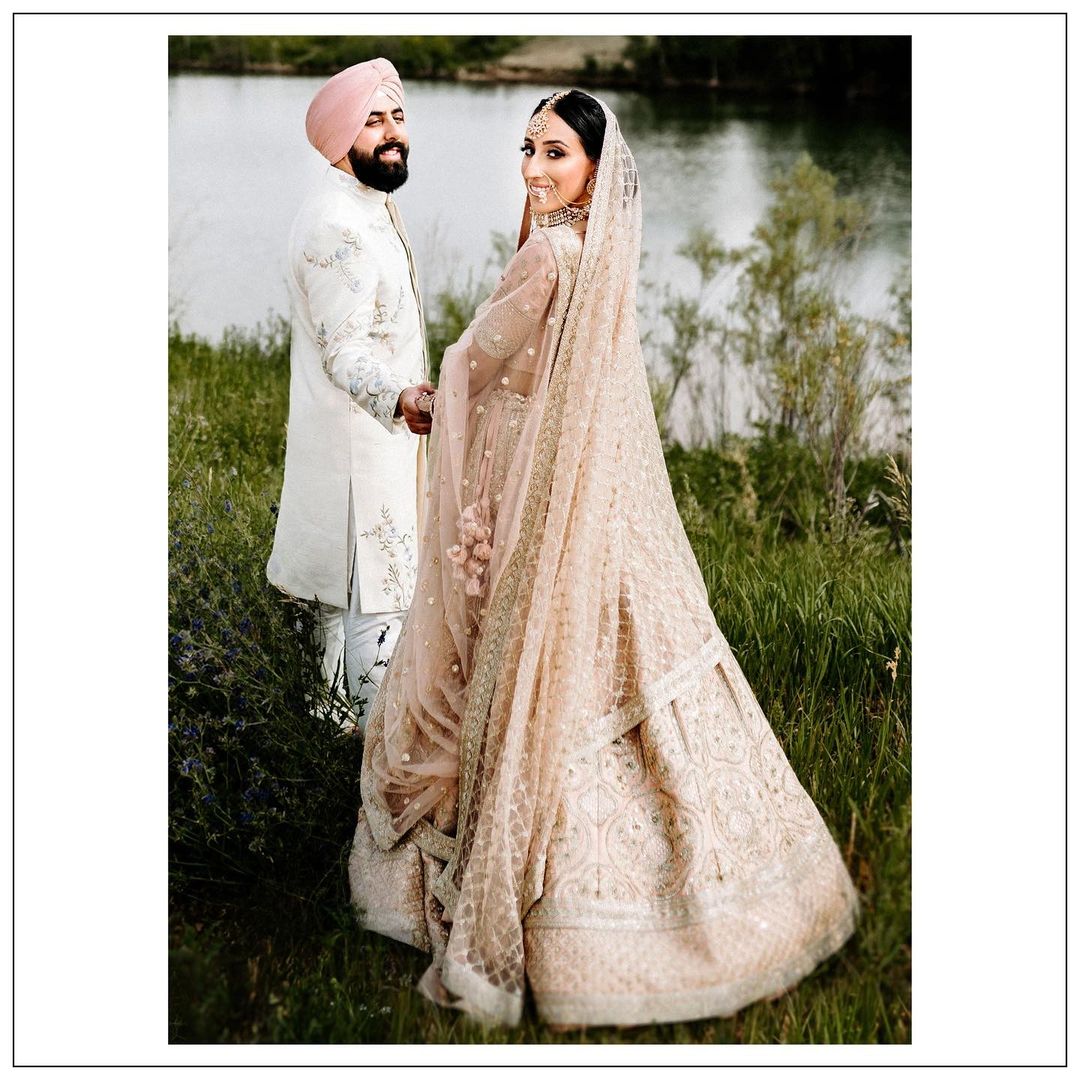 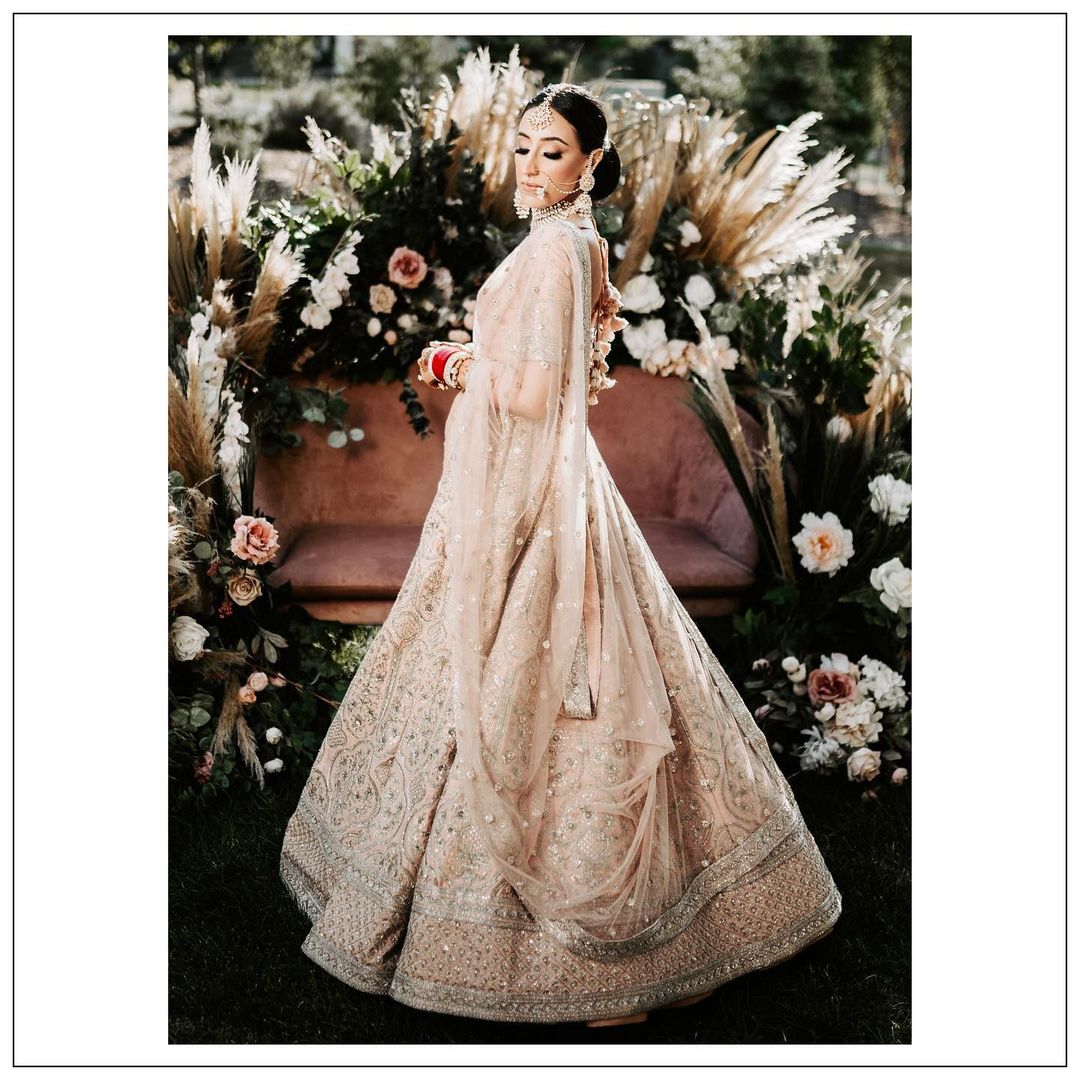 The bride’s choice of uniquely designed Sabyasachi lehenga had looked stunning, and her pictures had already blown our minds. What about you? Let us know.

Next Read: The Sabyasachi Bride Wore A White Lehenga At Her Anand Karaj Ceremony With Minimalistic Jewellery