Saba Ali Khan shared a picture with Karisma Kapoor and hinted towards Karisma's news of being tested positive for the COVID-19 virus which started circulating since Kareena and Kajol's conversation.

There is no denying the fact that no one can escape from the media glares after becoming a celebrity. And a few number of times, the celebs also feel disturbed with so much intrusion into their private life. The same is in the case of Kareena Kapoor Khan and her sibling, Karisma Kapoor. Recently, the news about the latter's testing positive with the COVID-19 has started circulating in the media. And strongly disappointed with this, Kareena's sister-in-law, Saba Ali Khan, took to her social media handle and reacted hilariously.

On March 3, 2022, a video featuring Kareena Kapoor Khan involved in a conversation with Kajol was uploaded by a paparazzi handle. The Bollywood divas were seen twinning in black pants and a white shirt in the video. The duo seemed to have met after a long time as Kareena had asked Kajol, "What's happening?" Listening to this, Kajol responded by further asking Bebo about her baby. To this, Kajol had said that Jehangir has already turned a year older and mentioned having COVID-19. Kajol had also nodded in the same flow and that she had also tested positive once, to which Kareena said about Lolo, aka Karisma Kapoor, turning positive. Later, they hugged each other and bid adieu.

Also Read: Bappa Lahiri On Why He Immersed Father, Bappi Lahiri's Ashes In Kolkata, Calls Him 'Son Of Bengal'

A few hours ago, Kareena Kapoor Khan's nanad, Saba Ali Khan, took to her IG stories and shared a collage picture of her along with Karisma Kapoor. Wishing for a speedy recovery for her bhabhi's sister, Saba wrote a caption and a heart emoticon and tagged Karisma. Saba, in her caption, also hinted towards the news about Karisma's testing positive with the virus, which came out during Kareena and Kajol's conversation. She wrote:

"#getwellsoon @therealKarismaKapoor. Had no idea media could hear a conversation so clearly!! Next time… I plan to kidnap Jeh jaan I better not voice my thoughts aloud." 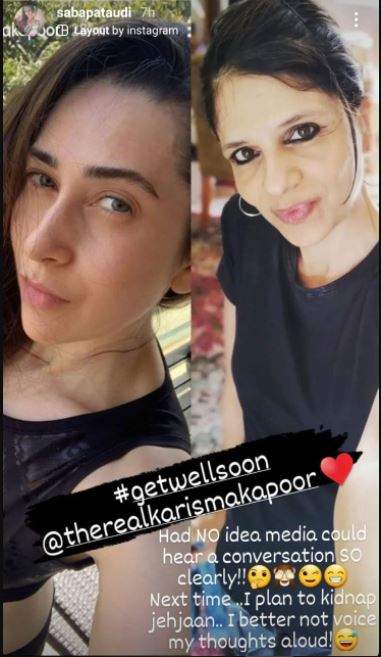 On February 24, 2022, film producer, Ritesh Sidhawani had hosted a dinner party for the newly married couple, Farhan Akhtar and Shibani Dandekar. It was a star-studded event where everyone had put their best foot forward. However, the Kapoor-Arora girl gang had caught everyone's attention with their sizzling fashion picks as they had posed for the paparazzi. The four BFFs, Kareena Kapoor, Karisma Kapoor, Malaika Arora and Amrita Arora had twinned in black outfits.

While Kareena Kapoor had looked stunning in a one-shoulder little black dress, her sister, Karishma Kapoor, had dazzled in a black and green sequinned mini dress. On the other hand, the Arora sisters had oomphed in black dresses, while Amrita had worn a ruffle off-shoulder full-length gown, her sister, Malaika, had worn a black sheer long dress and had paired it with a corset.

On February 22, 2022, daughters of the Kapoor family, Kareena Kapoor Khan and Riddhima Kapoor Sahni, had taken to their respective IG stories and had shared a series of pictures from their family's get together. Many B-town celebrities and members of the Kapoor clan were also present in the pictures like Karisma Kapoor, Neetu Kapoor, Aadar Jain, Tara Sutaria, Reema Kapoor Nitasha Nanda, Anissa Malhotra Jain and Armaan Jain. 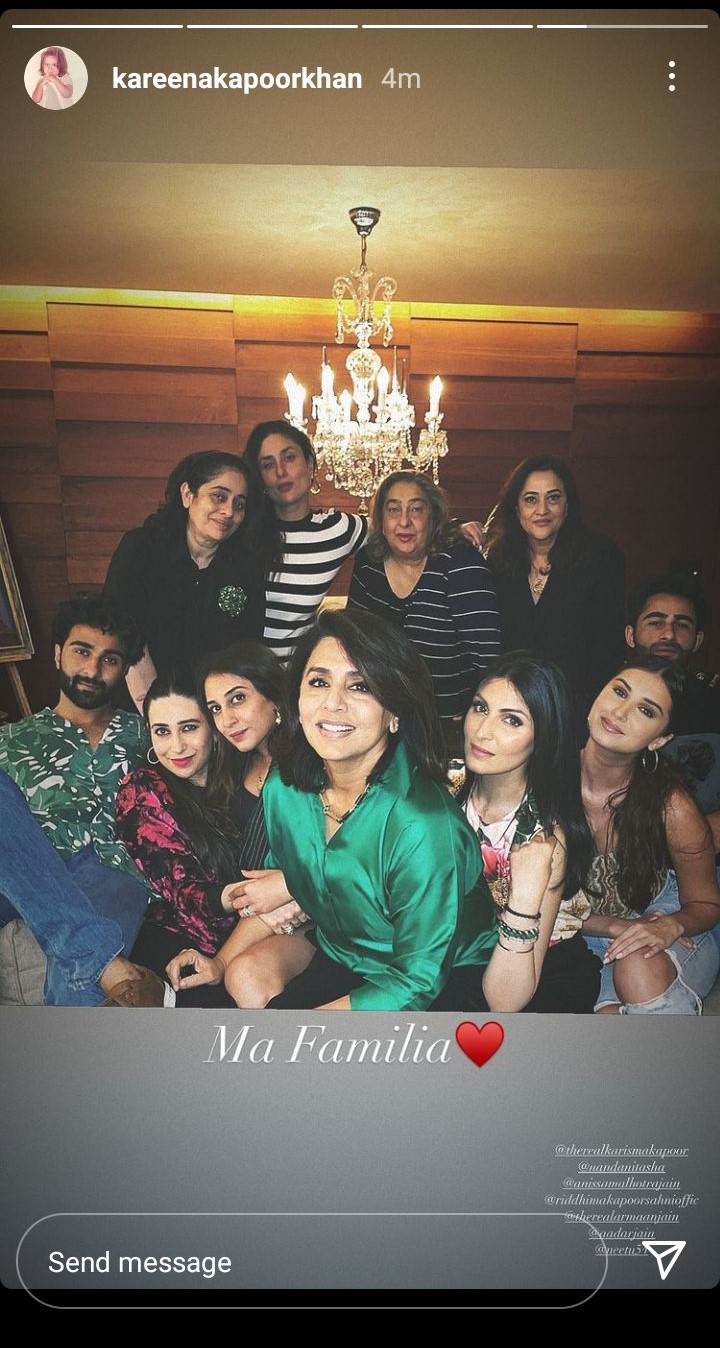 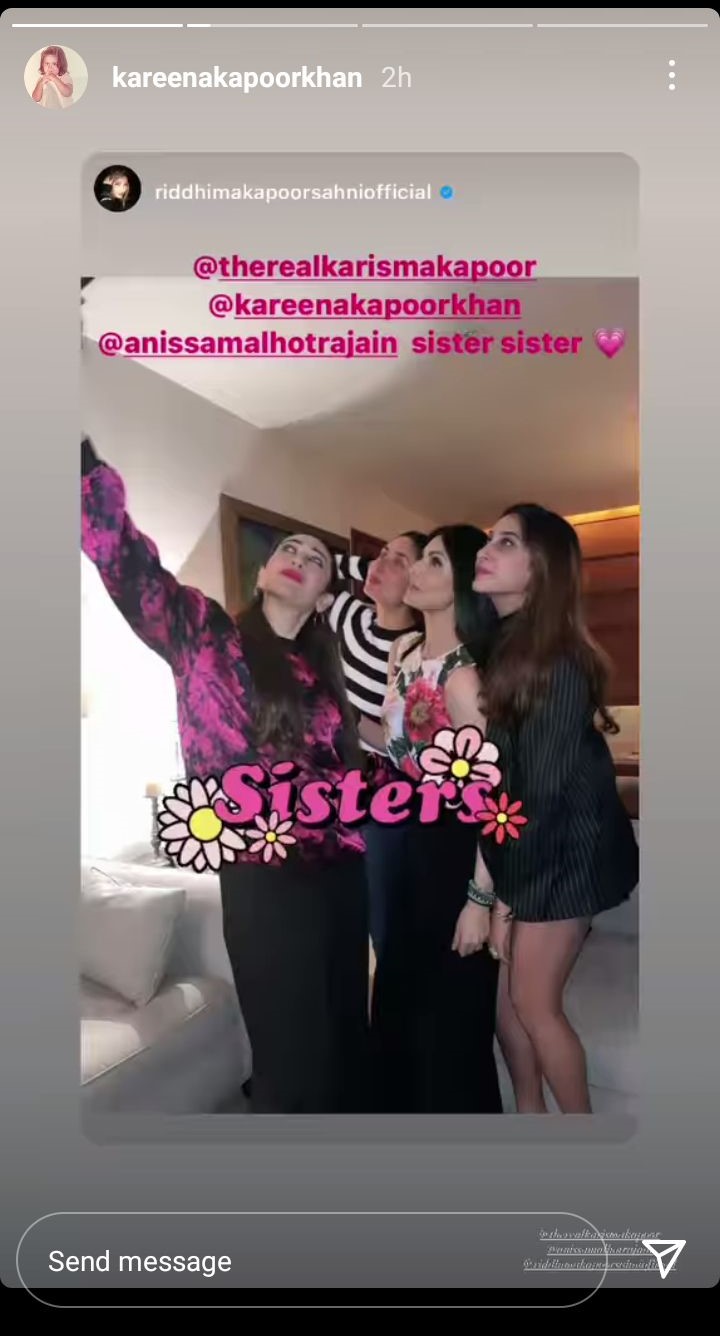