While dulhe raja had a swagger entry yesterday, Rubina rocked it too with her dancing entry as a bride. And now, we’ve got our hands on her first look after her wedding. In a pic which has surfaced online, we can see Rubina Dilaik’s first sindoor look post-marriage. Here’s that picture: 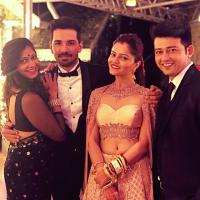 Isn’t she looking like a breath of fresh air? With her minimal makeup and shaadi ka chooda teamed up with her sindoor, Rubina is looking like a princess.

In what could be termed as no less than a fairytale wedding, Rubina Dilaik and Abhinav Shukla exchanged varmalas yesterday, wherein we saw that just when Abhinav was about to put the garland around Rubina’s neck, her friends and family lifted her up, making it difficult for the groom to reach to her. Take a look at the video: 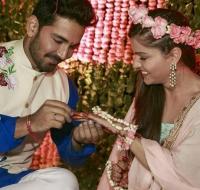 Talking about her wedding, Rubina earlier revealed to a media portal, “I am feeling neither nervousness nor excitement, as the preparations for the wedding and my ongoing TV show shoot schedules have left me numb (laughs). Coordinating things is very difficult. I have hardly slept for four to five hours a day in the last one-and-a-half months. Abhinav and I have decided to exchange seven vows after the traditional wedding. I have written mine and I hope he has too”. 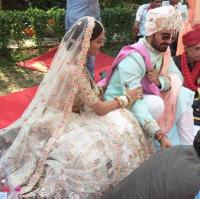 Rubina earlier revealed to the Times of India that she has created a song for Abhinav to be sung by herself on the wedding day. She was quoted as saying, “It took me four months to create the song, Teriya Mohabbataein, which is a Hindi and Punjabi mix. It’s my gift to Abhinav, as I wanted to dedicate him something in his mother tongue. Everybody expected me to dance, but I wanted to do something unexpected. I made an audio-visual representation of our relationship, sang the song, recorded it and played it. It was like a musical skit, which was enacted by my friends. That was the highlight of the evening”. 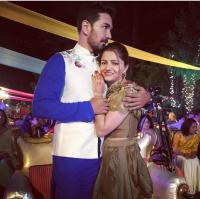 Speaking about the same, Abhinav retorted, “The Dilaiks impressed us with their warmth and hospitality. The song that Rubina dedicated to me is the best gift I have ever received. Rubina’s mom gave me an outdoor watch, which I was planning to buy since a long time. My mother gave Rubina some traditional jewellery, which she has inherited”. (Suggested Read: Priyanka Chopra And Nick Jonas Arrive In India Together, She Is Probably Moving In With Him)

For her wedding, Rubina wore an ivory coloured lehenga with floral embroidery on it, and she teamed it up with polki, pearls and laakh jewellery. What made her look even more resplendent was her unique chooda, kalire and the veil. Abhinav, on the other hand, looked dapper in a mint green asymmetrical sherwani with minimalistic zari work, teaming it all up with a beige-coloured turban with a sehera. 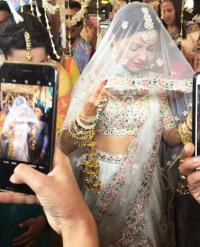 Well, we wish the couple a very happy married life. Do let us know in the comments section below as to what you feel about Rubina Dilaik’s first sindoor look post-marriage.