Indian cricketer, Rohit Sharma and his wife, Ritika Sajdeh are on cloud nine today as their daughter, Samaira turned one. Rohit and Ritika shared heartfelt birthday wishes for her on the occasion. Birthdays always hold a special place in our hearts and especially first birthdays. A couple’s life starts to revolve around their little munchkin when they hold him/her in their arms for the first time. For parents, their kid’s birthday is always a special occasion and they try to celebrate it by hosting a grand birthday bash, inviting all their friends and family members and preparing yummilicious delicacies. But more than any other birthday, it is the first birthday that gets special attention as their little munchkin completes one year and they also celebrate their anniversary as parents for the first time. (Recommended Read: Deepika Padukone Has Removed Her Permanent 'RK' Tattoo After Her Wedding With Ranveer Singh)

Indian cricketer, Rohit Sharma and his wife, Ritika Sajdeh’s love story is nothing less than a fairytale. Ritika and Rohit’s romance had started when she used to work as a sports event manager for Rohit. They used to meet for their work and soon their work meetings had turned into date nights. Rohit had proposed Ritika in a romantic way and it included everything that a girl can ever wish for, a solitaire ring also. Rohit had taken Ritika to Borivali sports club ground in Mumbai, where he had first started playing when he was 11. He had proposed her with a big ring and had asked her to marry him! Later, the two had gotten married in a grand ceremony on December 13, 2015. 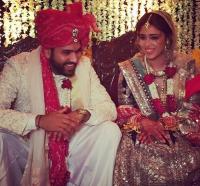 The madly-in-love couple, Rohit and Ritika had welcomed their little angel, Samaira in their lives on December 30, 2018. Today (December 30, 2019), Samaira turned a year older and to wish her, her parents shared heartfelt notes. Sharing pictures from the birthday celebration and throwback pictures, Rohit wrote, “Happy happy birthday to my little Cookie Monster. Your arrival has brought nothing but excitement, laughter and bliss to our lives. Here’s to more midnight dancing, rapping and showing you the world.” 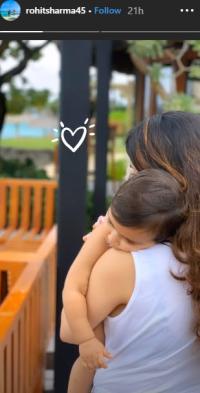 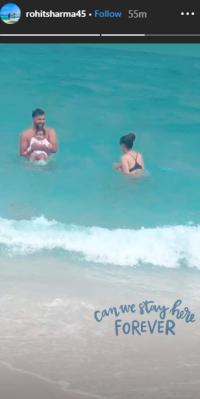 Ritika Sajdeh also took to her Instagram handle and shared some throwback pictures with her daughter, Samaira and wished her with a heartfelt note. Her note could be read as “Our baby is ONE!! Happiest birthday Sammy-boo. This has been the best, most challenging, most fun year of our lives and it’s all thanks to you baby girl. From dancing to Santa Shark and Jubel, to splashing around in whatever water body we find, to saying hi to every bird, dog, tree and lamppost we see. May this year be filled with lots of love, luck and bubbles.” (Suggested Read: Anushka Sharma And Hubby, Virat Kohli Pose With Varun Dhawan And GF, Natasha Dalal In Switzerland) 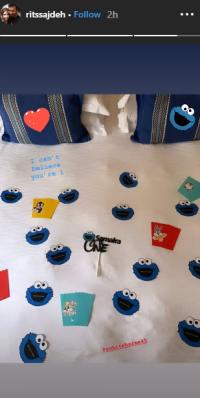 After three years of marital bliss, Rohit Sharma and Ritika Sajdeh had welcomed their little angel, Samaira in their lives. Ever since Samaira’s birth, Rohit and Ritika have been sharing glimpses of their lives and how they are nurturing their angel. On January 6, 2019, Rohit had taken to his Instagram handle and had revealed the name of his daughter. He had shared an adorable picture with his wife, Ritika and newborn daughter, Samaira and had captioned the picture as “Baby Samaira”, followed by a heart emoji. 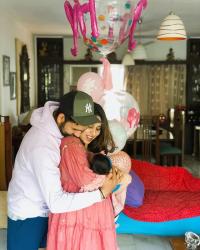 Rohit and Ritika had kept the pregnancy under the wraps until she had shared some blurry party night pictures on her social media handle wherein, she was seen wearing a loose white dress, which she had teamed with a denim jacket and sling bag. And in those pictures, Ritika was seen flaunting her cute baby bump. There was no confirmation from Ritika and Rohit about the same, but guess the picture spelt the truth! 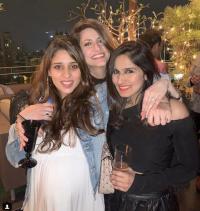 In an interview with Australian cricketer, Michael Clarke, Rohit Sharma had talked about the life-changing moment and had said, “I cannot wait to be a father; it is going to be a game-changing moment in our lives. I am eagerly awaiting the moment of becoming a father. It will be a moment to change our lives.” He had further shared the reaction of his teammates and had said, “When my teammates got to know that I am going to become a father, they were laughing at me. They were like you are going to be a father. The reaction came in because of the mannerism and the things I have done in my previous years. They think I am irresponsible, obviously in a funny way. But I am gonna make sure that everything changes.” (Must Read: Ranbir Kapoor-Alia Bhatt's Wedding Preparation Begins, Neetu-Rishi Speed Up The Work At KrishnaRaj) 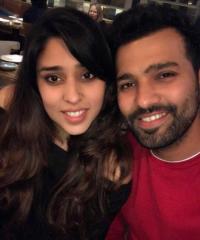