Television actor, Rithvik Dhanjani shared an emotional note on his parents' 35th wedding anniversary, along with cutesy Boomerangs on Instagram. See inside!

Popular television actor, Rithvik Dhanjani melted the hearts of his millions of fans across the nation with his heartfelt wish for his parents on their wedding anniversary, along with a set of cutesy family GIFs. The actor, who is extremely attached to his mom and dad has once again proved that he's a doting and loving son, after he penned a note that would make any parent in this world emotional. For the unversed, Rithvik will soon make his return to acting after hosting a lot of reality shows on television. But instead of returning to television, he is going to be seen next in a web series, in which he is working and shooting for the last two and a half years.

The year 2020 had broken the hearts of millions of showbiz fans when their favourite television couple, Rithivik Dhanjani and Asha Negi had parted ways. After their breakup, in an interview with SpotboyE, Asha Negi was asked if she is ready to give love a second chance or not. To which she had replied, "I don't think I am ready right now, and I think I owe some time to myself." However, soon after that, reports had started emerging that after Rithvik's breakup with Asha, he is reportedly in a relationship with singer, Monica Dogra. On March 29, 2021, Rithvik Dhanjani took to his Instagram handle and shared three cutesy Boomerangs with his parents and their pooch from a sweet cake cutting ceremony as the lovely couple completed 35 years of togetherness. In the video, we can see Rithvik sitting on the floor holding their pooch, while his father and mother sat behind him on a sofa, posing for the camera with their cutest antics. Along with the beautiful Boomerangs, Rithvik penned down an emotional note in the caption, in which he praised his parents for teaching him a lot of things about love. His caption can be read as "It's 35 years to this mad love story… I've seen them fight like babies over silly things like door knobs and dog food, seen them with there "who's better at what" battles where mom wins hands down, everytime."

Going further in his note, Rithvik Dhanjani also heaped immense praises on his mom and dad for always being there for each other. Whether it's about their strengths or about shortcomings, they simply never gave up on one another. He added, "They eat, pray and love together, togetherness is what binds them is what makes them unlike anything or anyone I've seen. They wear each other's strengths like a crown and share each other's shortcomings without a frown. What I learn from them is that love is all that there is, and love is all that there will be. I love you mumma papa!! Happy anniversary #love #anniversary #momanddad #blessed #grateful.” 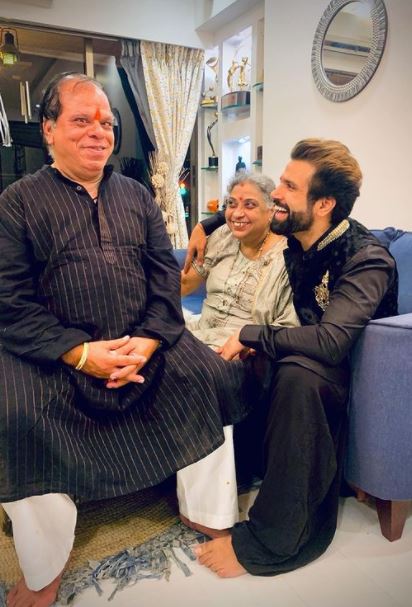 The doting son, Rithvik Dhanjani never misses a chance to be with his parents on important festivals and their special days, as time and again, we have seen him posting pictures from the same on his social media handles. For instance, it was on June 1, 2020, when Rithvik's father had turned a year older, and the actor had taken to his IG handle and had shared two utterly cute pictures with him. While the first picture is all about this goofy father-son duo's swagger, the second one is the epitome of cuteness overloaded, as Rithvik's father had looked nothing less than a kid. Rithvik had penned a note along with these pictures, and it could be read as "Happy birthdayyy baapu! The chirpy teddy bear of our lives… You find the greatest engine capable of running at full speed, top it up with some extra nitro cylinders and then see it blazing at full throttle that's papa dhanjani! *thu thu*."