The ageless beauty and 90s superstar, Karisma Kapoor is celebrating her 46th birthday today. Scroll down to check out how her cousin, Riddhima Kapoor Sahni wished her on her special day! 'Mujhko hui na khabar, chori chori chhup chhup kar, ab pyar ki pehli nazar, haye le gayi le gayi, dil le gayi le gayi'! Pretty sure you would've sung this in tune and remembered the iconic dance of the gorgeous, Karisma Kapoor. After all, who can forget the blue-eyed beauty who had ruled our hearts back in the day? Karisma Kapoor was the epitome of beauty and talent and had brought an unconventional change in the parameters of beauty in the industry with her bushy eyebrows and minimal makeup look. Lovingly called 'Lolo', Karisma celebrates her 46th birthday today and we can't wrap our heads around her formulae of 'agelessness'! (Recommended Read: When Rishi Kapoor Had Set The Stage On Fire Dancing Alongside Son, Ranbir Kapoor At IIFA Awards)

As Karisma Kapoor turns 46-years-old today, fans from all over have started pouring in the good wishes and her social media handle is flooded with birthday wishes. Karisma has aged like a fine wine, more graceful, more beautiful with age. Scroll down to know how her cousin, Riddhima Kapoor Sahni wished her on her birthday! 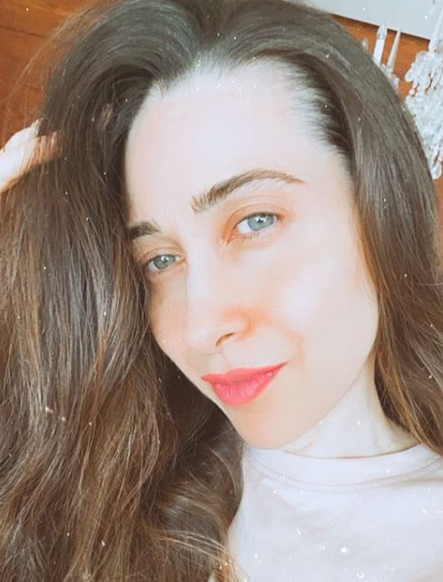 Riddhima Kapoor Sahni took to her Instagram stories to wish her cousin, the gorgeous, Karisma Kapoor a happy birthday as she turned 46-years-old today. Riddhima shared multiple pictures of her with Karisma on her story and wrote, "Happiest Birthday @realkarismakapoor" followed by a red heart emoji atop it. In one of the pictures, we can see the glam avatar of the Kapoor cousins as they pouted for a gorgeous selfie. The other picture sees Karisma Kapoor and Riddhima Kapoor Sahni on a casual outing, with Karisma donning a black polka-dots dress and flaunting her shades. The last picture has Karisma Kapoor's mother, Babita Kapoor with Riddhima Kapoor Sahni in the frame, as they posed for the camera. Check out the screengrab of her story below: 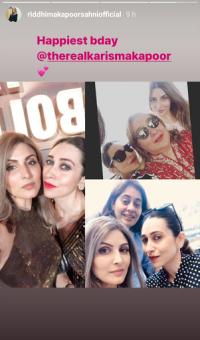 Riddhima Kapoor Sahni never shies away from flaunting her great rapport with her siblings. Some days ago, in a fun 'Ask me anything' session on IG, Riddhima had revealed the fun camaraderie she shares with her brother, Ranbir Kapoor. A user had asked her, "Do you and Ranbir fight each other even at this age?" To which, Riddhima replied, "All the time" followed by a laughing emoji. Similarly, there were a lot of questions thrown at her and she had answered each one of them gracefully. A fan had asked, "How is Neetu mam? Is she doing fine? More strength to you." To which, Riddhima had replied, "We derive strength from each other-we are well." Another had said, "Aapki inspiration kon hai mam? (Who is your inspiration?)" And the doting daughter, Riddhima had replied, "My mother." Check out the screengrab of the stories below. (Also Read: Samantha Akkineni Takes A Journey Down The Memory Lane And Shares A Childhood Picture) 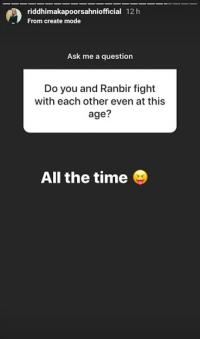 Even the birthday girl, Karisma Kapoor dotes on her siblings and keeps giving her fans a sneak-peek of the great camaraderie shared by Kapoor sisters, every now and then. Some time back, Karisma had posted a collage on her IG story, which had featured the Kapoor sisters flaunting their ‘masked’ faces. Kareena Kapoor Khan and Karisma Kapoor had looked amazing in their de-glam avatars, and had managed to keep the spirits high even when at home and apart. Karisma had a perfect caption for her IG story, which could be read as “Packing and Pouting together.” Karisma had then credited Nisha for the facemasks, “Thanks @nishsareen this Matcha Mask was so good!! @kareenakapoorkhan.” (You May Also Like: Aayush Sharma Is Enjoying Pool Time With Wife, Arpita Khan Sharma And Kids At His Hometown In Mandi) 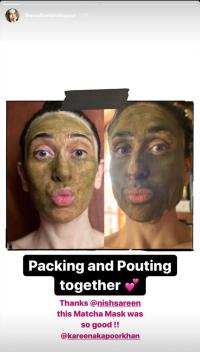 Kapoor khanadan's daughter, Riddhima Kapoor Sahni turned 40-years-old on September 15, 2020, and it is 'jashan' time in the Kapoor house! Hoards of wishes came flooding Riddhima's way on her 40th birthday, and the best ones came from her star cousins, Kareena Kapoor Khan and Karisma Kapoor! (Recommended Read: Himanshi Khurana Says