No matter how highly you regard your favourite celeb couples from the tinsel town, it’s always their celeb kids who would lift your mood. Isn’t that right? One such celeb couple, Shweta Tiwari and Abhinav Kohli’s little son, Reyansh Kohli is all adorbs with his infectious cuteness. Every time we stumble upon his pics and videos on social media, we can’t help but get swarmed away in his cutesy antics. (Also Read: Pavitra Punia And Sara Khan's Ex-BF Paras Chhabra Has Found Love In Another Famous Actress)

Now, in a video shared by papa Abhinav Kohli, we can see Reyansh all geared up to become the fittest celeb kid. Confused? Read on. As his elder sister, Palak Chaudhary, is lying down on her yoga mat, Reyansh Kohli seems to be on his “On Didi’s Footsteps”. Take a look at one-and-a-half-year-old, Reyansh Kohli doing yoga:

Isn’t this cute? For those who do not know, Kasautii Zindagii Kay fame actress, Shweta Tiwari and Abhinav Kohli got married on July 13, 2013, and the two were blessed with their baby boy, Reyansh on November 27, 2016. This is Shweta’s second marriage as she was earlier married to Raja Chaudhary with whom she has a daughter, Palak, who is seen in the above video. 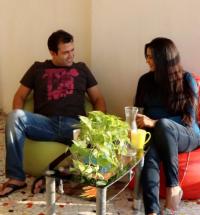 Shweta is an avid social media user and regularly keeps posting adorable pics and videos of Reyansh. Recently, she posted the following picture and beautifully captioned it as, “I would like to travel the World twice! Once, to see the world. Twice, to see the Way You see the World!!!” 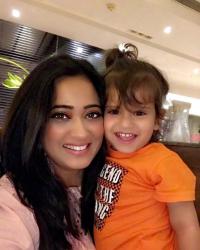 In another pic shared by Shweta, Reyansh could be seen wearing a customised baby wear and is looking a little Eskimo. 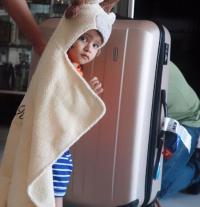 Now, coming back to Reyansh and Palak, undeniably their love is pure and beyond words like every brother-sister bond in this world. Once, Palak wrote an emotional letter for her little brother and it would definitely make you teary-eyed. This is what she wrote, “Dear Reyansh, I can't tell you how immensely lucky you got with your parents, your mother, our mother. Being your senior by 16 years in this matter I can assure you that this lady here will do everything humanly possible just to give you a scintilla of happiness. As the years will pass, you will take this day to acknowledge her as well. Her, who every single day, deals with you and your true imbecile of a sister. As of now, I give her a million reasons to disown me but it's her innate desire to keep pushing me until I, someday, hopefully, become 1/100 of her pristine soul and samaritan self”. (Suggested Read: Anushka Sharma-Virat Kohli, Varun Dhawan-Natasha Dalal Came Hand-In-Hand For 'Sui Dhaaga' Screening) 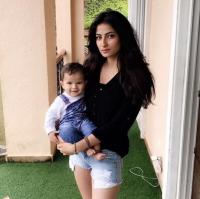 Palak’s letter could further be read as, “See, there will be times, inevitably, when you don't agree with her, when you'll think she's really not aware of what she's doing (trust me, I've been there) but she will always be right. You need to cherish her because someone capable of giving such an extensive amount of love, deserves nothing less. Here's to you mom, I love you so much @shweta.tiwari”. 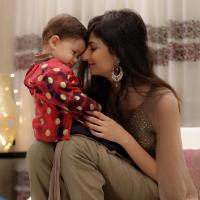 You must be aware that rumours of marital problems between Shweta Tiwari and Abhinav Kohli started doing rounds recently. But Abhinav came out in the front and rubbished such fake rumours by saying, “Problems in our marriage are only rumours and there is no truth in them. I hope that after this, the rumour in question is buried forever. Shweta and I have not had any differences. We are staying together very happily”. (You May Like: Alia Bhatt Shared The Cutest Picture Of Boyfriend Ranbir Kapoor On His Birthday, Calls Him Sunshine) 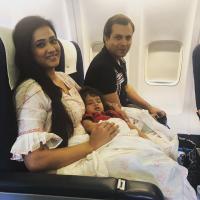 Well, we are glad that all is well between Shweta and Abhinav. And guys, how did you like the video of Reyansh Kohli doing yoga following his elder sister, Palak Chaudhary? Share your views below.