Raveena Tandon misses her summer vacation amidst the lockdown. On May 6, 2020, she shared dreamy pictures from her snowy vacations.

With the ongoing lockdown due to the COVID-19 pandemic is making everyone bonkers. With more than 45 days of lockdown, everyone is missing their office and other social activities. While some are working from home but for others, passing their time has become a major task. In such a situation, people are taking a trip down the memory lane and going through some throwback pictures of the good old life which we once had. And this is exactly what the Shehar Ki Ladki, Raveena Tandon has been doing. (Also Read: Ibrahim Ali Khan's 'Bully Face' Throwback Picture With Sara Ali Khan Is Every Brother-Sister Ever)

The one actress, who had ruled the hearts of millions in the 90's, is none other than Raveena Tandon, who killed everyone with her thumkas. A mere mention of the song, Tip Tip Barsa Paani from the film, Mohra takes us to the gorgeous yellow chiffon saree-clad Raveena dancing her heart out with the handsome Akshay Kumar. Raveena had met her dream man Anil Thadani during a business meeting. After a courtship of a few months, Anil had proposed Raveena and the two had gotten engaged in a low-key ceremony. On February 22, 2004, Raveena and Anil had tied the knot in a traditional Punjabi and Sindhi style weddings and had begun their happily ever after. 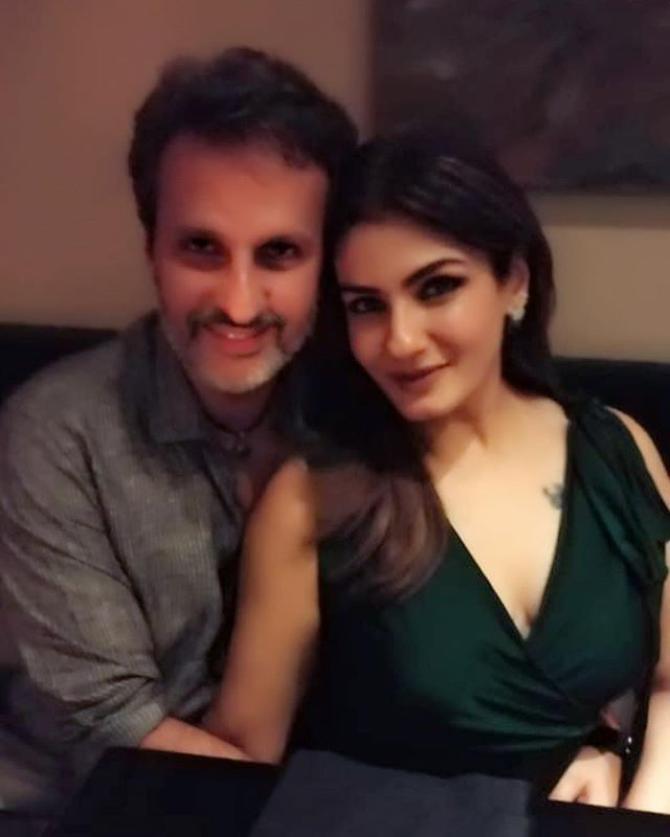 Even after 16 years of marital bliss, a mere glance at this lovely couple makes our heart flutter. On May 6, 2020, Raveena Tandon, who is missing her summer vacation took to her Instagram handle and shared some throwback pictures from her snowy vacations. Along with the beautiful pictures, Raveena wrote, “#throwback When the summer gets to hot to handle... my heart dreaming of snowy vacays, soft, fresh snowed in slopes and the icy moon... disclaimer- always in #fauxfur.” 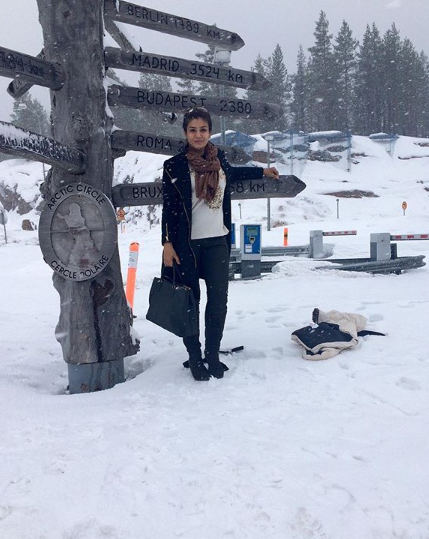 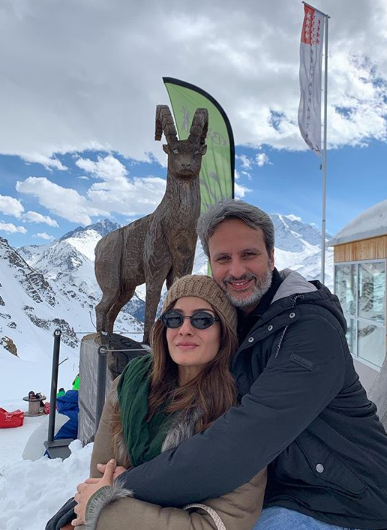 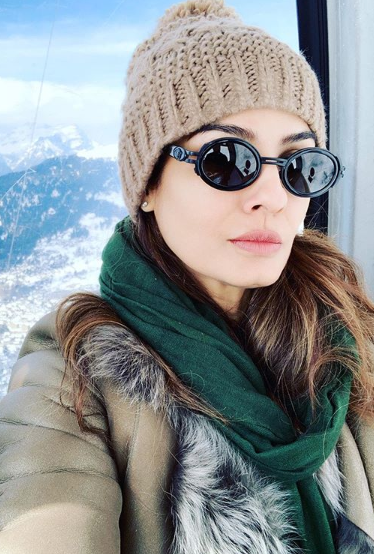 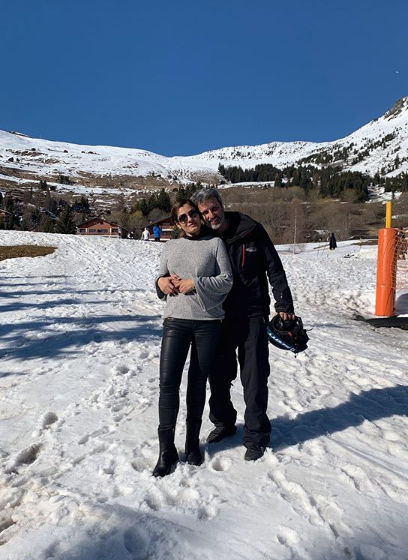 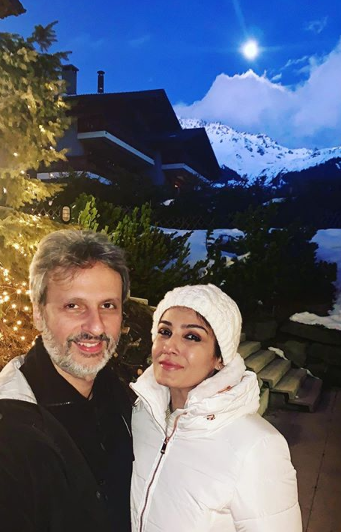 On February 22, 2020, Raveena Tandon and Anil Thadani had completed 16 years into married life and to mark the same, she had shared a romantic collage of some cherishable moments with her hubby. In the collage, we could see pictures from their D-day, some of the most memorable pictures from their vacations and dates. Raveena had penned a short and crisp but adorable caption along with the collage that could be read as “16 years of us and many many more lifetimes together. Thank you all for the love and blessings always.” (Also Read: When Ranbir Kapoor Had Touched Rishi Kapoor's Feet At An Award Function And Made Neetu Kapoor Proud) Raveena Tandon and Anil Thadani are a match made in heaven and their love story gives goals to the millennials. Raveena loves to surprise her hubby with gifts, movie and dinner dates. On March 2, 2020, Raveena had taken to her Instagram handle and had shared gorgeous pictures with her hubby, Anil from the wedding ceremony of her niece. Looking stunning in a green-coloured lehenga, Raveena had captioned the pictures as “Prem kahanis are made of these...#meandmine.” 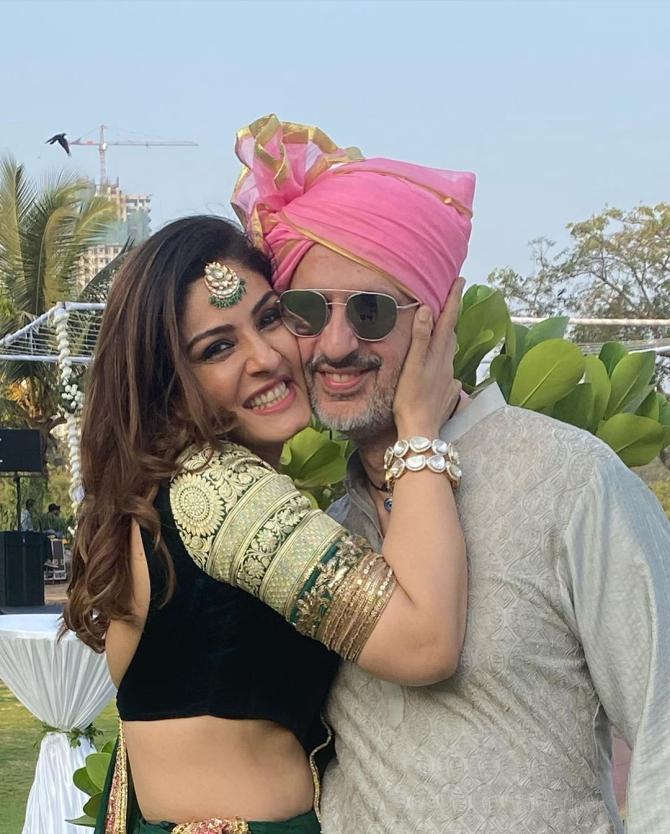 In an interview with the Filmfare Magazine, Anil Thadani had revealed how destiny bought them together. He had stated, “Raveena was producing her film Stumped. And I was releasing the film for her. At that point, I dealt only with her partners. It was only after the release that we met and got to know each other personally. We knew each other socially; we were business acquaintances, so the question of love, at first sight, didn’t arise. But one thing led to another and quickly. So it didn’t take me long to propose to her. I guess when things are meant to be, they just work out. If you realise our courtship period didn’t last longer than five-six months. We were engaged for two months and then we got married. I never wanted a big wedding. I thought she would prefer a grand one but surprisingly she was on the same page. I think we’re similar in many ways. (Laughs) But there are natural differences of course.” (Also Read: Hina Khan Shares Funny Video Of Her Dad Getting Scared By Her Mom After Their Fridge Stops Working) Are you also missing your summer vacation? Let us know.