Being blessed with 4 kids, Raveena Tandon Thadani totally knows how to nail motherhood and be a 'bachcha' with her kids. Check out which game she played with them inside!

Parenting in the 21st century is not a cakewalk. It is more of walking on a rose, you don’t know when you might step on a soft petal or be torn by a harsh thorn. To manage your kids well, every parent needs to turn like them and understand them. Especially during these testing times. Bollywood Shehar Ki Ladki, Raveena Tandon Thadani totally knows how to nail motherhood and engage her kids. (Also Read: Deepika Padukone Penned The Cutest Birthday Wish For The Light Of Her Life, Ranveer Singh)

Raveena Tandon had gotten married on February 22, 2004, with Anil Thadani. However, Raveena is not just known for her acting skills, dance moves and enthusiastic nature, but the actress has inspired millions by adopting two girls, Chhaya and Pooja Tandon at the age of 21. Apart from two adopted daughters, she has two biological kids, Ranbir and Rasha Thadani. Being blessed with 4 kids, Raveena Tandon Thadani totally knows how to nail motherhood and be a bachcha with her kids. 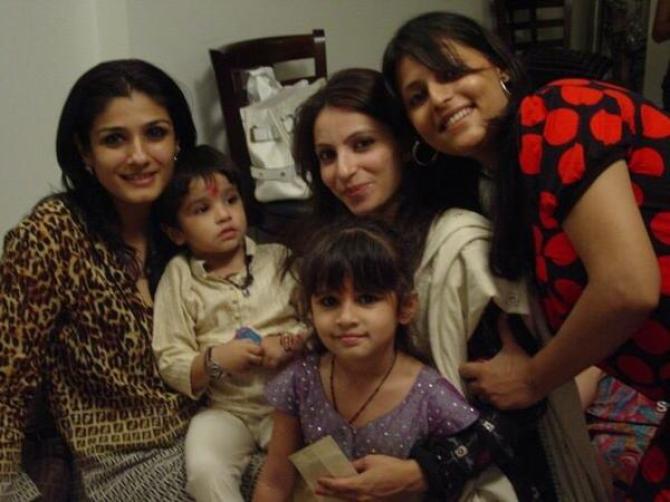 We all have grown up hearing our parents’ stories on what games they used to play as kids. Not many of us got lucky to play those games again because probably we didn’t even care. But, Raveena Tandon got the chance to revive her childhood memories with her kids, Rasha and Ranbirvardhan as she plays her childhood games. Taking to her Instagram handle on July 6, 2020, Raveena shared two pictures of herself, holding a mechanically made helicopter. In one picture, we can also see a partial glimpse of her daughter, Rasha. Sharing the pictures, she wrote, “Our lockdown hobby! Back to my childhood days, when we played with mekanos. Rasha and I make them and then Ranbirvardhan fits in a board and codes it and makes them run! loving it! #bachpankiyaadien.” Take a look: Raveena Tandon knows how to have fun just like the teenagers do, a proof of which is a throwback video shared by her on April 7, 2020, on her Instagram handle. In the video, she could be seen dancing on the streets of New York, back when the world was COVID-19 free. In the video, we could see her daughter, Rasha getting a little embarrassed like anyone of us and to annoy her more, Raveena’s husband, Anil had joined in the fun. She had captioned the video as "#throwback (2017) #THROWBACK to the days when the streets of #newyork were full of fun and happiness! Now - Prayers for all in New York, India, Maharashtra, Italy, london. May the world heal and we all see a better brighter healthier planet soon. Rest in peace all those who succumbed to this disease. You will always be in our prayers. In this video, Rasha @officialrashathadani as usual totally embarrassed by my behaviour, Anil and I teasing her even more and she tries to run away! Video credit– @official_ranbirvardhan_thadani @ranbir_loves_mufc.” This is certainly what we all would have done, but would have got embarrassed looking at our parents do that. (Don't Miss: Smriti Khanna's Baby, Anayka Dresses Up For Her Mom's Birthday, The Actress Calls Her The Best Gift)

On March 2, 2020, Raveena Tandon Thadani had taken to her Instagram handle to share her first-ever TikTok video with her daughter, Rasha. The actress had posted two videos, wherein, we could see her acing the 'flip the switch' challenge. In one video, the actress could be seen having fun with her daughter, Rasha. While the two nailed the challenge like a boss, Raveena’s dog had also made the cutest appearance in the video. She had captioned the video as “Finally hopped on the trend! Go check out my very first Tik Tok with @officialrashathadani Link in bio.#tiktok #flippedtheswitch". In another video, Raveena could be seen doing the same challenge with her daughter, Rasha, and her dog and cat. She had captioned the second video as "This was switch -2. . Did you guys notice themost obvious switch! find me on TikTok @officialraveenatandon link in bio.” (Recommended Read: Raghu Ram's Son Turns 6-Months-Old, Daddy Cool Shares Pictures From Rhythm's 'Annaprasana' Ritual)

Did this motivate you to sit with your parents and play their childhood games?