In Rohit Shetty directorial, 'Sooryavanshi', Akshay Kumar will recreate his 90s hit track, 'Tip Tip Barsa Paani', and he had announced the same on Twitter. Check out how Raveena Tandon reacted! 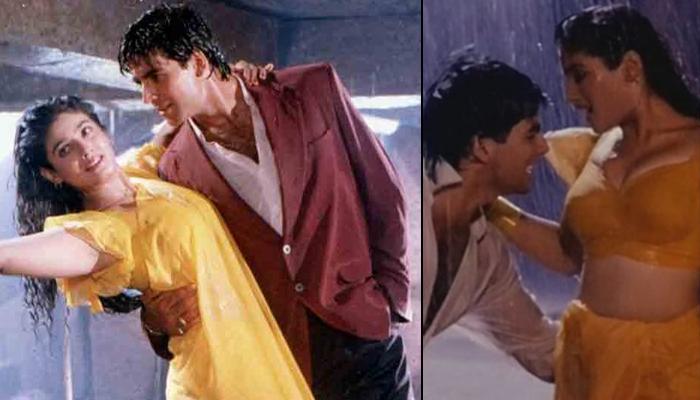 Tip Tip Barsa Paani, Paani Ne Aag Lagayi, Aag Lagi Dil Me Toh, Dil Ko Teri Yaad Aayi… For every 90s kid, Raveena Tandon and Akshay Kumar starrer this song from Mohra hold a special place in their heart. The iconic rain song with sensuous Raveena in that wet yellow saree and the oh-so-passionate chemistry between her and Akshay, the standards set by this song is so hard to beat it, even today! But looks like Bollywood is planning to ‘re’make this classic song soon and guess who will be casted for the same? (Also Read: Sunaina Roshan's Rumoured Boyfriend, Ruhail Amin Lashes Out At The Roshans, Says This Is Unfortunate)

It is none other than the Khiladi of Bollywood, Akshay Kumar! In Rohit Shetty directorial, Sooryavanshi, opposite Katrina Kaif, Akshay will recreate his 90s hit track, Tip Tip Barsa Paani, and he had announced the same on social media. Sharing his excitement, Akshay had written on Twitter, “I would’ve definitely been disappointed if any other actor would’ve recreated Tip Tip Barsa Paani, a song which has been synonymous with me & my career & I can’t thank Ratan Jain ji enough. At times like these you realize, we may have come a long way but we also go back a long way.” 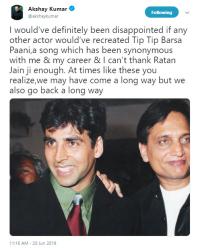 In an interaction with SpotboyE, when Raveena Tandon was asked to comment on the idea of the remake of their song, she was quoted as saying, “Sounds Superb, I love new remixes.” But as soon as Akshay Kumar had tweeted that the song, Tip Tip Barsa Paani is ‘synonymous’ to him and his career, and had forgotten to mention his heroine, Raveena, it left the Twitteratis disappointed and they were quick to point it out for him. Akshay was trolled for missing mentioning Raveena in his tweet and while some took a sarcastic jibe at him, some had just put it straightforwardly to him. 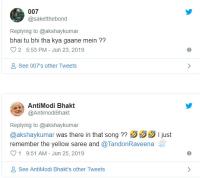 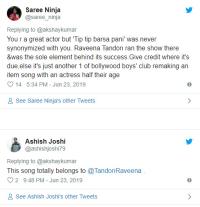 Akshay Kumar and Raveena Tandon’s love affair isn’t something that has been hidden from the Bollywood lovers. Back then, Akshay and Raveena were often spotted hanging out with each other, and they had decided to make their on-screen love a real one. Soon the news of their intimate secret engagement broke on the internet, but later, things took an ugly turn in their paradise and they called off their relationship. Given the ‘Casanova’ image of Akshay, a time came in their relationship when things went on standstill for Raveena and they parted ways. (Also Read: Karisma Kapoor Celebrates Her 45th Birthday With Sister Kareena Kapoor Khan And Mom Babita In London)

Sometime back, during the #MeToo movement rage in the nation when women came out in open and had shared their sexual harassment stories, Raveena Tandon had too tweeted regarding the same. Her tweet had hinted at married actor(s) in Bollywood who chase and flirt with actresses in the industry, destroy their careers and eventually replace them with other potential targets.

Raveena Tandon had tweeted, “What defines harassment in a workplace? The fact that many industry wives/girlfriends are silent observers or instigators, when actor husbands destroy the actresses careers after the chase and flirtation is over, have them replaced with other potential targets?” She had further added, “When our industry fails to stand for and protect its own. They get their chance and lose it. Makes our films on women empowerment hollow. The deafening silence on #TanushreeDutta case is sickening. remember the controversy breaking out. (part 1)” 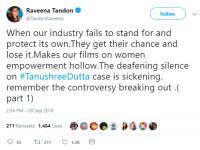 Raveena Tandon had continued, “Sadly no witnesses or proof. So one couldn’t say. But obviously for her this has been a life changing incident. I’ve worked with Nana too, (Mustafa) had heard about his volatile temper, but never witnessed it. In fact he was courteous and helpful. (part 2)” It could be further read as, “Today there is social media, a lot more information given,10 years ago mostly people would rely on the gossipy magazines which carried scandalous headlines to sell. One didn’t know the difference between reality and yellow journalism. (Part-3) #TanushreeDutta”.

Her tweet finally concluded, “It’s time witnesses came forward and stood by her, unafraid of the consequences, and let the law take its own course. We should not judge and media lynch. lets put our faith in the judiciary and let justice unfold. Innocent till proven guilty. (part4) #TanushreeDutta”.

After reading her tweets, Raveena Tandon’s fans started wondering if she was hinting at her alleged ex, Akshay Kumar and his wife, Twinkle Khanna, and his then-latest "target" being Mouni Roy (who debuted with him in Gold). Unable to understand this co-relation and being disappointed with such reactions to her tweet which questioned the industry harassment in general, Raveena had slammed the Twitteratis. To hit back at the trolls, Raveena had tweeted, “Some not so clever people making a connect without any knowledge of past. My observations are not my life alone. Its all what I’ve seen happen to women around in my industry. Colleagues and friends. Not targeting any one person. Infact remained friends did movies.” (Also Read: Malaika Arora And Arjun Kapoor Jet Off To New York For A Holiday Ahead Of His Birthday, Look Dapper)

Are you excited for the remake of the iconic song, Tip Tip Barsa Paani? Let us know!