Raveena Tandon and Anil Thadani attended the wedding ceremony of her niece and made heads turn with their PDA. Raveena posted some beautiful mushy pictures with her hubby, Anil.

With Patthar Ke Phool, she made her way into the hearts of the audience and the song, Kabhi Tu Chhalia Lagta Hai, had touched us with her innocence. Every mention of her name reminds us of her sizzling dance number, Tip Tip Barsa Paani, when she had floored us in a yellow chiffon saree. Then she killed us with Ankhiyon Se Goli Maare and we couldn’t think of anyone acing the thumkas better than her. In her career of close to three decades, we have happily concluded that no one does ‘matak matak’ better than Raveena Tandon! (Also Read: Disha Patani Shares Her 'First Dance Block' With 'Baagh', Tiger Shroff On His 30th Birthday)

The Sheher Ki Ladki, Raveena Tandon had met her Dulhe Raja, Anil Thadani, who is a prominent name in the business of film distribution. Because Raveena and Anil were introduced during the process of some business dealings, their initial relationship was predominantly professional. After a courtship of a few months, Anil had proposed Raveena on her birthday and in a low-key ceremony, the lovebirds had gotten engaged. And on February 22, 2004, Raveena and Anil had tied the knot in traditional Punjabi Khatri and Sindhi style weddings at Jag Mandir Palace hotel at the centre of the illustrious Pichola Lake, Udaipur. It has been 16 years since Anil Thadani and Raveena Tandon have been married, and even today, every glimpse of this couple together makes our heart skip a beat. A few hours back, Raveena gave a glimpse of what prem kahanis are made of with some beautiful mushy pictures with her hubby, Anil. Raveena and Anil attended the wedding ceremony of her niece and had made heads turn in a green-coloured lehenga. She captioned her pictures with Anil as “Prem kahanis are made of these...#meandmine.” 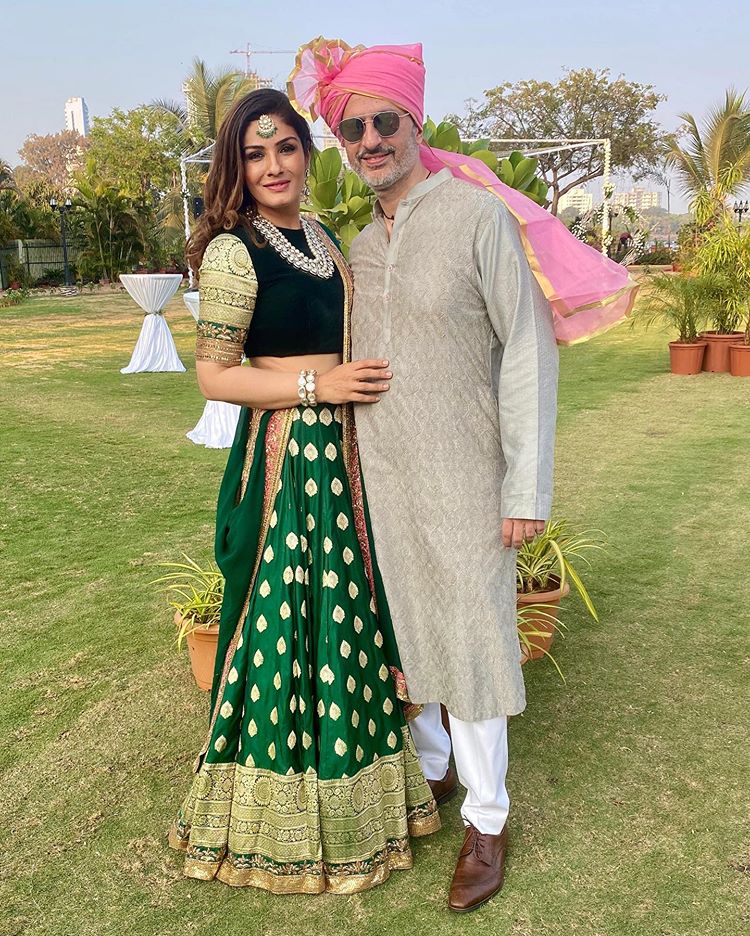 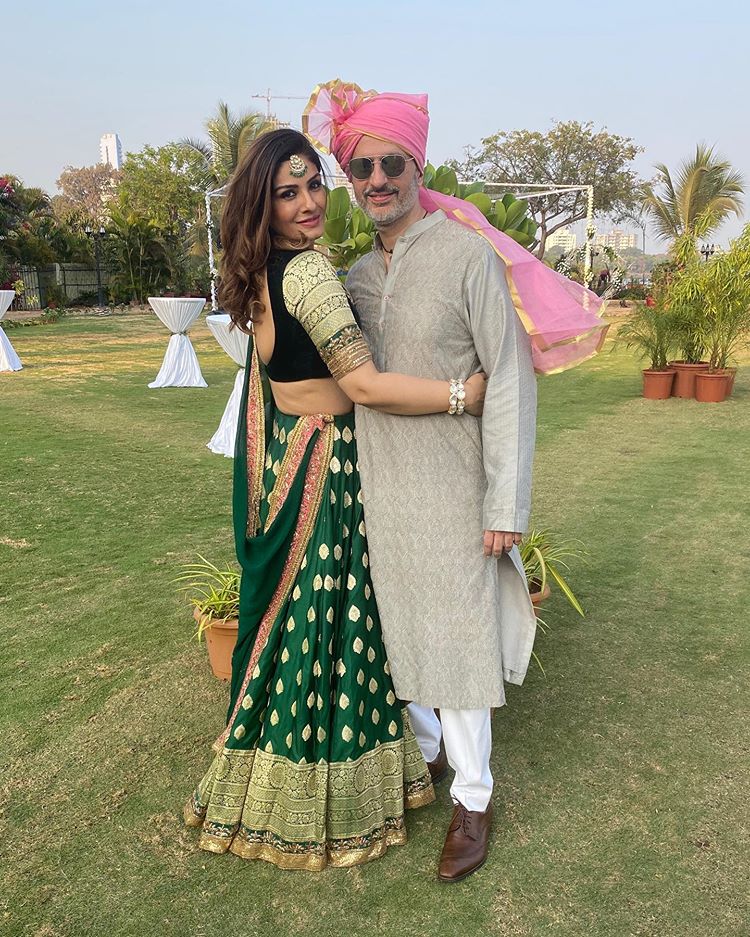 For the mehendi ceremony of her niece, Raveena Tandon and her daughter, Rasha had taken an auto ride to reach the venue. Sharing a video of the same, Raveena had written, “Jumped into an auto, as was getting late waiting for the car to go for my nieces mehndi ceremony. All decked up, Rasha and me, and a lovely auto ride! viva la mumbai Autowallahs! Total saviours!” She had later posted another video of her chat with the auto driver and had captioned it, “To all those who asked if he recognised! Yes he did, Arshad chicha turned out to be a fan and well wisher! Chatted with him a bit before leaving.” Raveena and Rasha made for a gorgeous mother-daughter duo in traditional outfits for the mehendi ceremony. Posting pictures with all her ‘favouritist people in the world’, Raveena had written, “With all my favouritist people in the world! #three generations of tandon thadani and makijany women.” (Also Read: Malaika Arora And Arjun Kapoor's Dinner Night Is Every Fitness Freak Couple's Dream Date Ever) 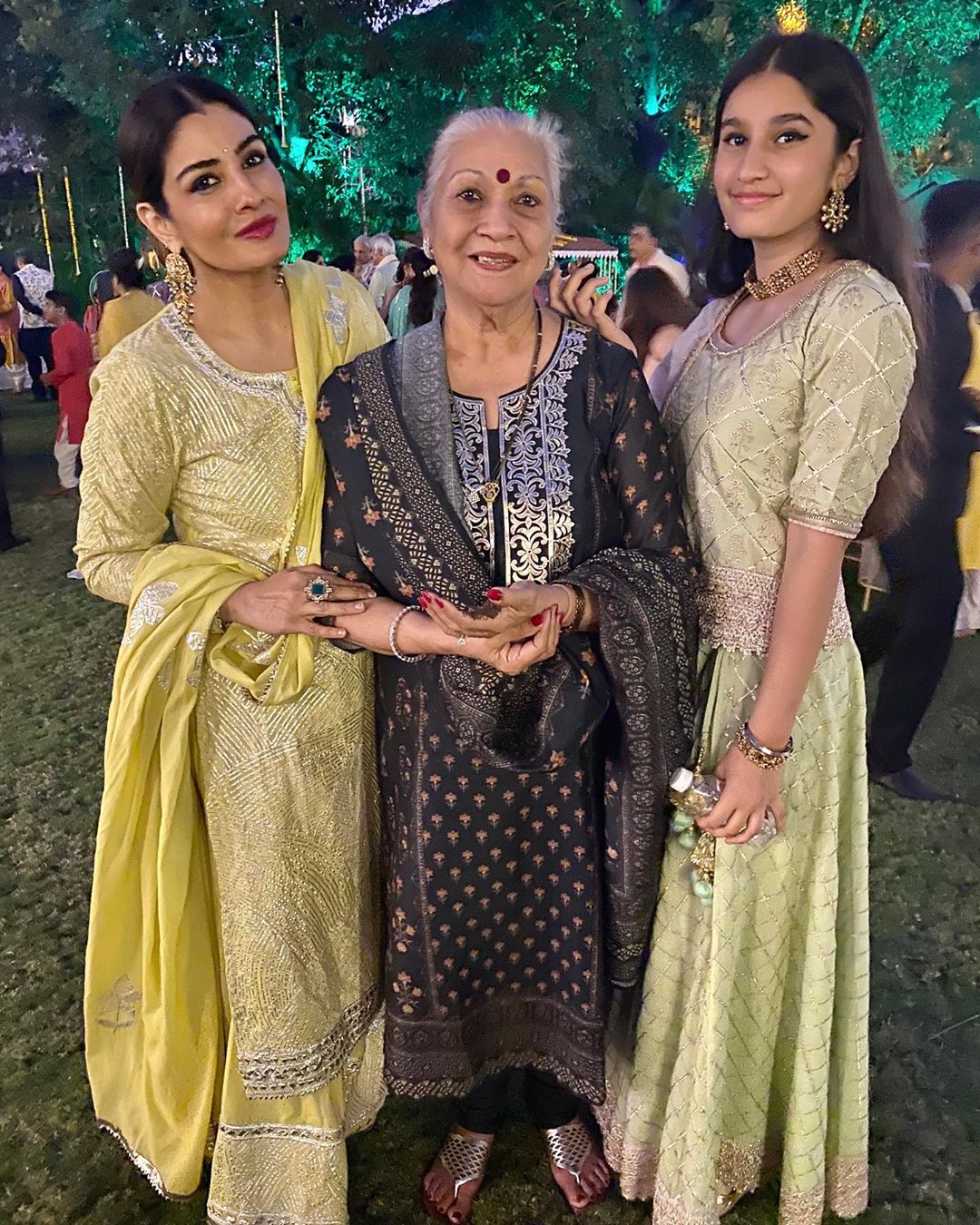 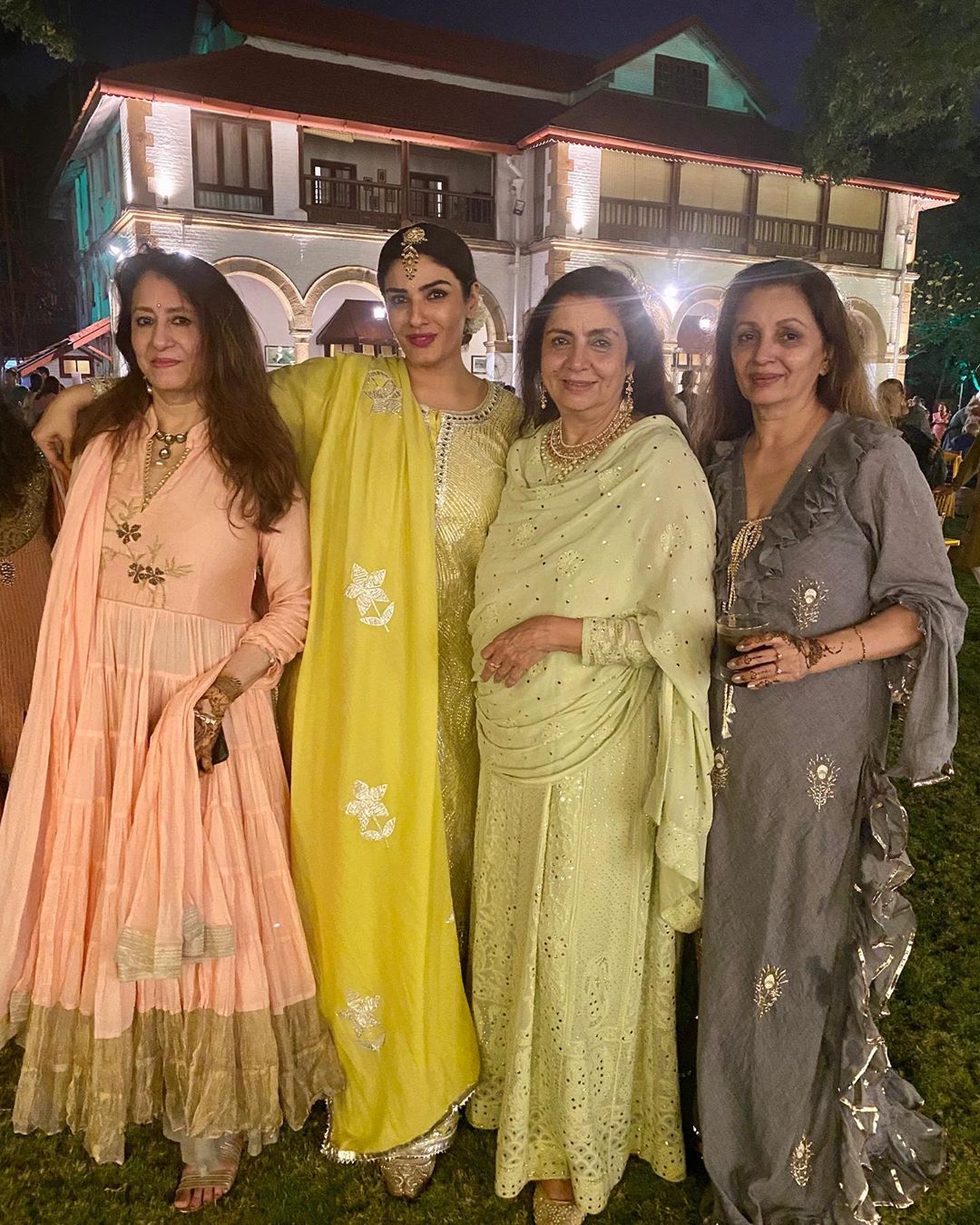 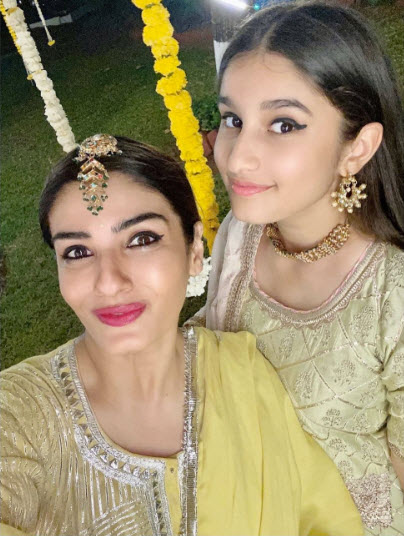 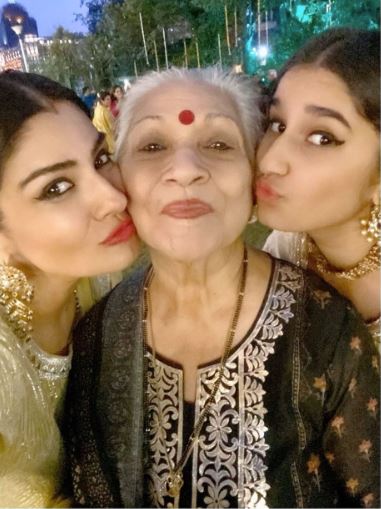 On February 22, 2020, Raveena Tandon and Anil Thadani had completed 16 years into married life and to mark the same, she had shared a romantic collage of some cherishable moments with her hubby. In the collage, we can see pictures from their D-day, some of the most memorable pictures from their vacations and dates. Raveena had penned a short and crisp but adorable caption along with the collage that can be read as “16 years of us and many many more lifetimes together..Thank you all for the love and blessings always.” 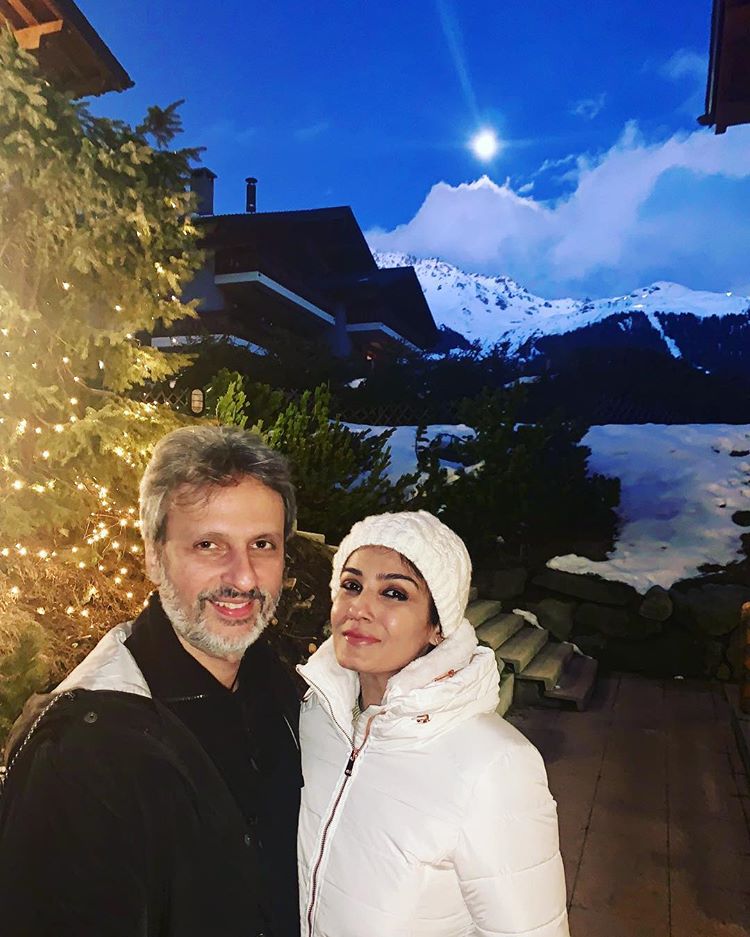 Revealing how things worked fabulously for him and his wife, Raveena Tandon in their marriage, Anil Thadani had stated, “She takes good care of my parents. Raveena is a pro at balancing everything at home. She’s never put her marriage on the backburner. I wouldn’t have liked it if she only wanted to work round the clock and not give time to the family and kids. Had she not let go of her star status, maybe we wouldn’t have been married today. Let me put it this way, I’m in a happy zone because she’s like the way she is. Life is good. She wants to be there for the children. She’s affectionate, extremely warm and down-to-earth. What’s truly endearing is how free spirited and easy-going she is. I’m not like that at all, I’m the sober sort. I’m a good listener; she’s a great talker so it works out fabulously for us.” (Also Read: Ruslaan Mumtaz And His Wife Nirali Mehta Celebrate Her Baby Shower Ceremony On Their 6th Anniversary) 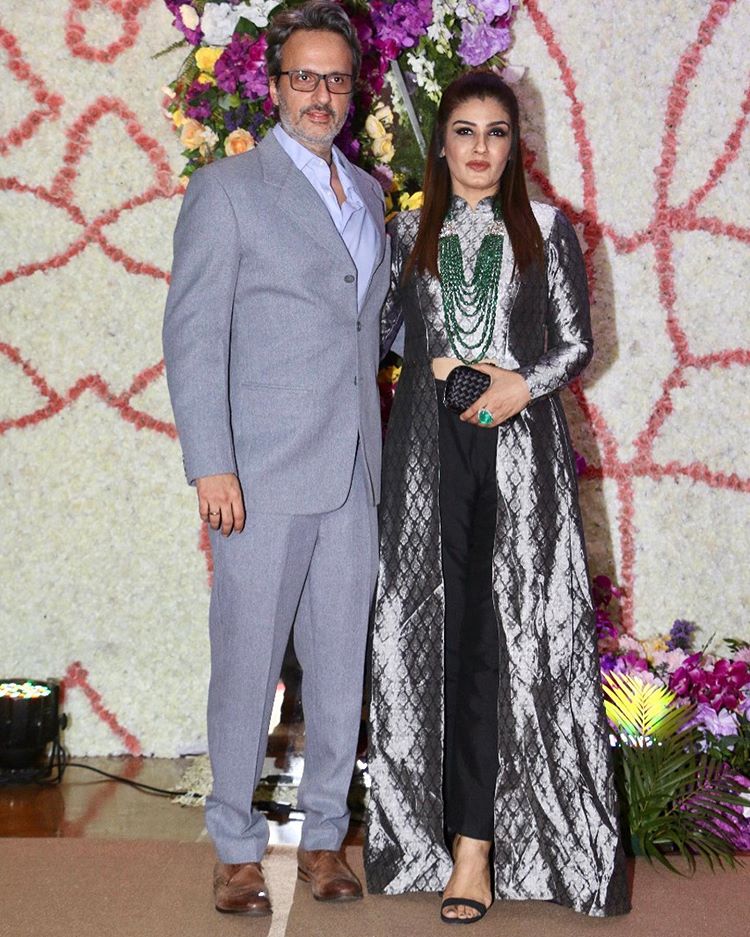 Aren’t they goals? Much love to this lovely couple!