Rashmika Mandanna talked about her on-screen chemistry with Vijay Deverkonda and why it is so effortless.

Vijay Deverakonda and Rashmika Mandanna are one of the most loved celebrity jodis on-screen. Ever since the two had starred opposite each other in superhits like Geetha Govindam and Dear Comrade, their fans are drooling over their chemistry. There have been rumours about them being madly in love with each other, which is stated as one of the prime reasons for their sizzling on-screen camaraderie.

Neither Vijay nor Rashmika have addressed these rumours and have always called each other 'thick friends'. On June 29, 2021, Rashmika had hosted an ‘Ask Me Anything’ session with her fans, where she had answered a number of questions. During the interaction, one of her fans had asked her to post her favourite picture with Vijay. Adhering to her fan’s request, Rashmika had posted a throwback picture with Vijay, where the duo was seen greeting the crowd from the stage. Another fan had asked her, “How special is Vijay Deverakonda to you”? To this, she had shared a hugging Boomerang and had written, “besssssst fraaaannnnd” atop it. 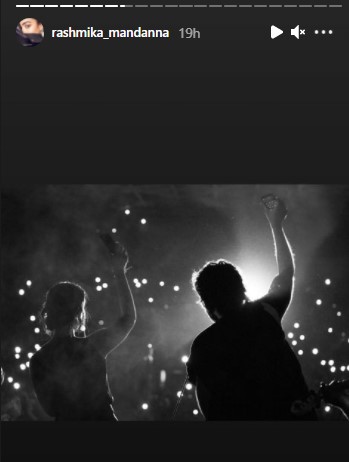 In an interview with Pinkvilla, Rashmika opened up about her bond with Vijay and talked about their on-screen chemistry. Revealing that they don’t even have to put an effort, Rashmika stated, "I think we are such good friends. He is literally my best friend off-screen. Both of our energies match and blend. We don't even have to put in an effort for the chemistry. Vijay and I just work on the screen." 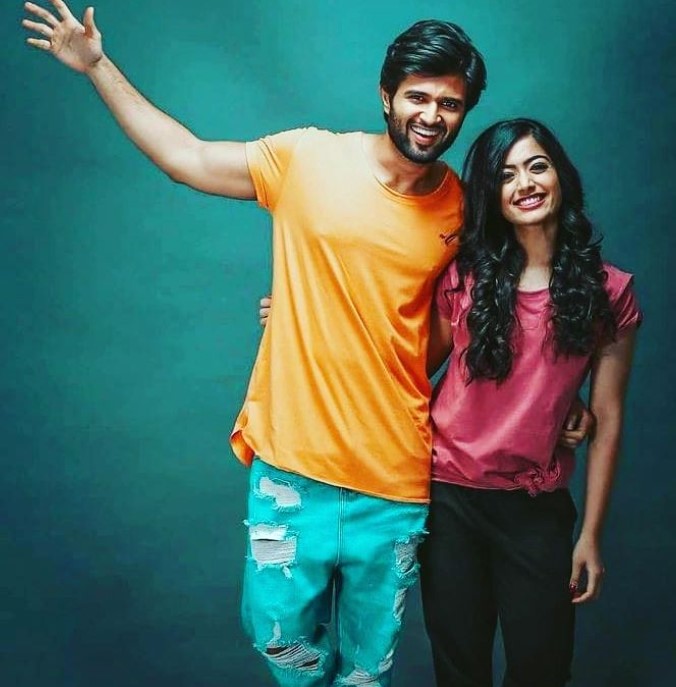 In the same interview, Rashmika also revealed when can their fans see them together again on-screen and shared, "Regarding our third film together you will have to just ask him. He has been busy shooting for Liger and I been waiting for that film. I am curious to see what happens next. We will do a film if my timeline and his timeline match." Vijay Deverakonda is all set to make his Bollywood debut with Liger, and Rashmika is quite excited for him. On January 18, 2021, Vijay Deverakonda had taken to his Twitter handle and had unveiled the first poster of Liger. After a few moments, Rashmika Mandanna had retweeted his poster on her timeline and had penned a sweet note filled with lots of wishes and compliments for the actor. The actress had praised Vijay's look in the poster and had revealed that she was anxiously waiting for the release of his film. Her tweet could be read as "So so proud!! Killer poster... CANNOT wait to watch the masterpiece on screen..I legit will be up on my feet whistling and dancing..All the bestest my sweet beasts! @TheDeverakonda @purijagan @Charmmeofficial @DharmaMovies @ananyapandayy."

Also Read: Neha Bhasin Confesses, She Would Have Dated Pratik Sehajpal If She Had Met Him Before Her Marriage 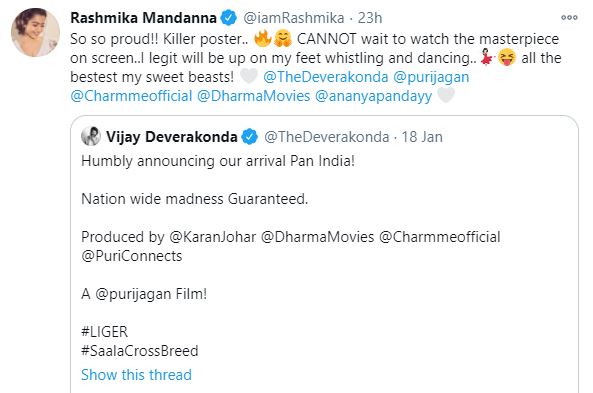 On the work front, Rashmika Mandanna will debut in Bollywood with Mission Majnu opposite actor, Sidharth Malhotra!

Vijay Deverakonda And Rashmika Mandanna Go On A Vacation Together, Post Similar Pictures 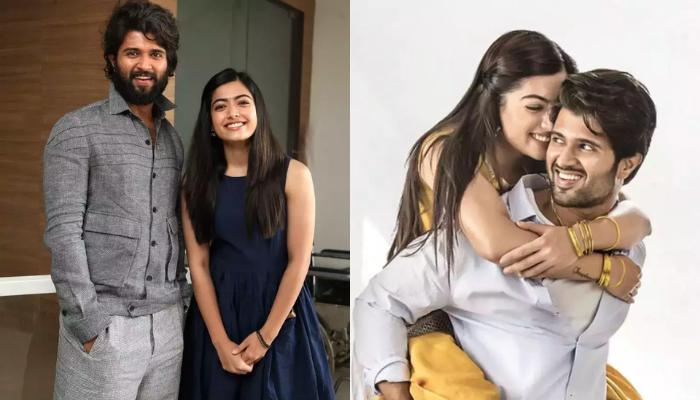 Vijay Deverakonda and Rashmika Mandanna's relationship rumours have been doing the rounds for a while now.  A much-loved and highly successful on-screen couple, the duo has made their way into people's hearts and aroused a deep-seated wish to see them together in real life. While they have never acknowledged any rumour