Rana Daggubati and Miheeka Bajaj never fail to shower love on each other. Check out the doting wifey's reaction when a fan admitted her love for her hubby, Rana!

Love in the times of Coronavirus pandemic seems like a distant dream. The mandatory social distancing and masks have made it impossible for two people to fall in love. The COVID-19 outbreak has created a world, which has changed and strained the dynamics of relationships. The lockdown had made couples part ways as they were not able to cope up with all the changes, but there were many, who had found love in these strange times. And Bollywood actor and South superstar, Rana Daggubati had made headlines, when he had announced his love for Miheeka Bajaj. (Recommend Read: Rahul Vaidya Proposes GF, Disha Parmar On National Televion, Says, 'I Will Wait For The Answer')

On May 12, 2020, Rana had taken to his Instagram handle and had shared the picture with his soulmate, Miheeka Bajaj. He had posted a mushy picture and had confirmed that 'Miss' Miheeka Bajaj had accepted his proposal of turning into his 'Missus'! Since then, everyone was hooked to Rana and Miheeka's Instagram feeds and they had waited for them to post an update about their relationship. Later, the duo had tied the knot in an intimate ceremony in the lockdown. Recently, Rana conducted an 'Ask Me Anything' session on his newly created Instagram page, Dingoism's, which is an animated character. During the session, a fan wrote, "Say Rana, I still love him after he's married also. Ok bye." To this, Dingoism replied, "Miheeka gonna be mad pissed." The star wife, Miheeka reshared the Instagram story and wrote, "Not more pissed than I am with you, Dingoism," atop it. Check it out below: 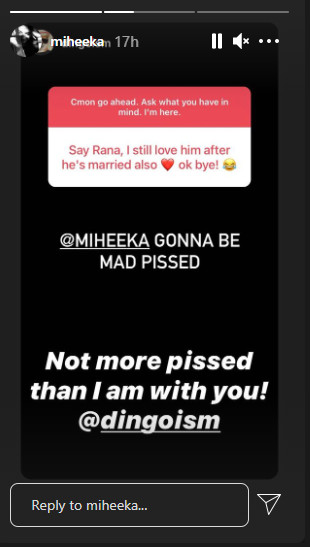 Miheeka also shared a hilarious post on her Instagram handle and showed her anger towards Dingo, the animated character. Sharing a promo video, she wrote, "Why are you? Hey @ranadaggubati! How does @dingoism keep beating me to things? You cook for him on karva chauth and now he puts up the promo before me? I’m your wife! First dibs yo!" (Also Read: Bigg Boss 14: Jaan Kumar Sanu's Mom Lashes At Rahul Vaidya, Says 'Jaan Is A Better Singer Than Him')

Rana and Miheeka had tied the knot amidst the lockdown in an intimate wedding with 30 people. While everyone was rooting for the new couple, many wanted to know how love brewed between them. Rana had opened up on his marriage with Miheeka in an interview with Neha Dhupia for her show, #NoFilterWithNeha. Talking about how love had brewed between Rana and Miheeka, the actor had shared, "I know Miheeka for a very long time because my sister and she went to school together. So, I’ve known her pretty much all my life and there’s only a handful of people who move from Hyderabad to Bombay. So, we got talking during lockdown and I said okay, this is right and that’s about it. So, when good things happen, I don’t question too much, I just go. Everyone’s got a timeline, it’s okay. That’s fine." 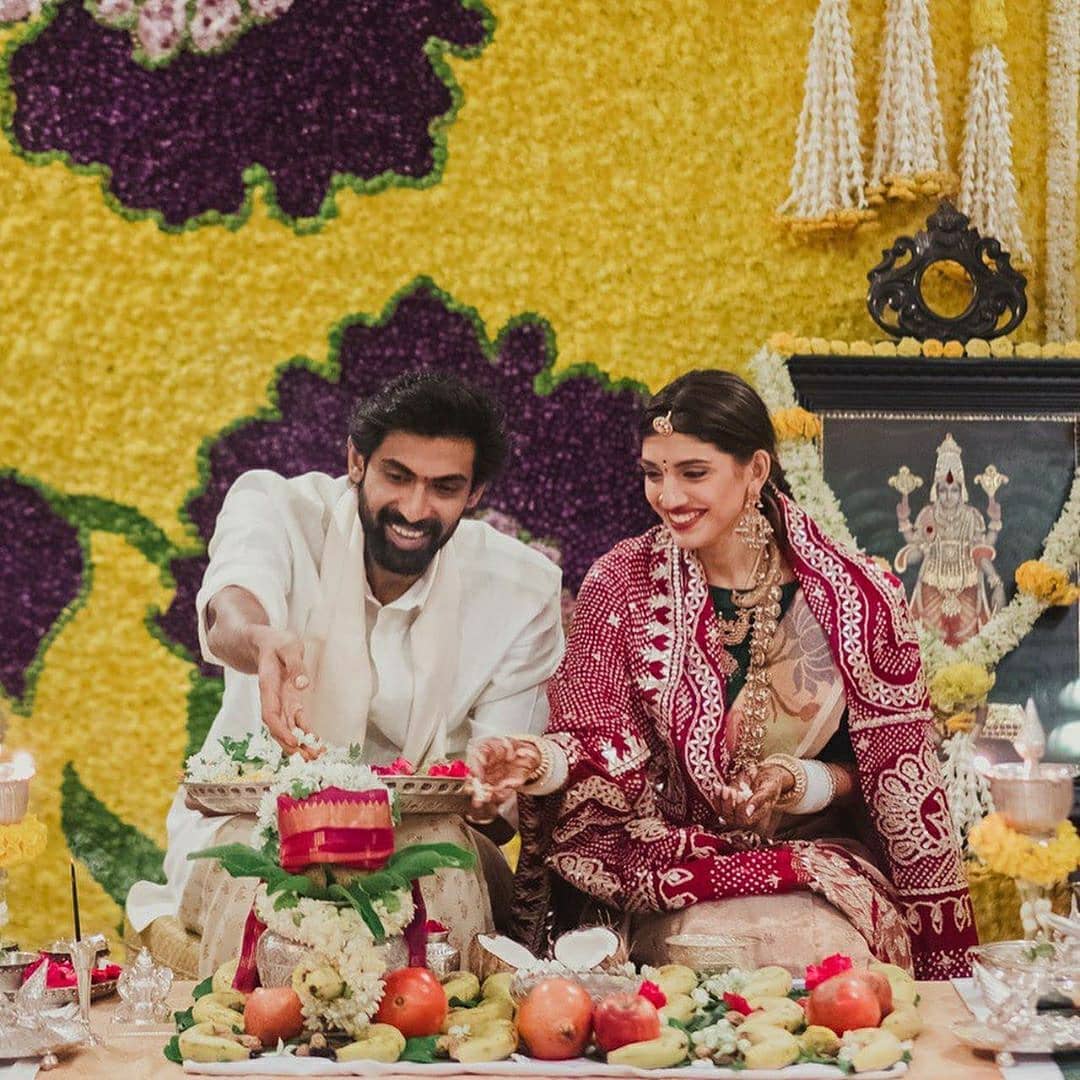 Rana had also opened up on his wedding in a studio due to the lockdown period and had said, "Honestly, there’s no filming happening, anywhere. Obviously, because a time like Covid, like the way we are in right now, it's got social distancing, it's got the least number of people, a studio is the only place where you have a place, right? So, I was like okay there you go. And everybody thought it was a great idea. It was five minutes from my house. Only two friends of mine were at the wedding. So, it's like 30 people, I think less than that. Two of my friends who also live with me. Ya, so everyone was tested and then it was like a huge lawn where only thirty people were, so it was fine. It was a lawn & a car park, together. I think we just made that one and then there you go, enough space for everybody." (Don't Miss: Kajal Aggarwal And Gautam Kitchlu's Honeymoon Pictures Amidst Sun, Sky And Sea Are Pure Couple Goals) Amidst the lockdown, when most of the weddings were getting postponed, that's when we got the best news of 2020. As the macho man of Bollywood and Telugu industry, Rana Daggubati had introduced us to his love. Yes, on May 12, 2020, Rana had taken to his Instagram handle and had shared