Rajeev Sen and Charu Asopa have been giving us #CoupleGoals ever since they tied the knot. Recently, we spotted them enjoying 'Dill ki Sardi'. Check out their mushy pictures! 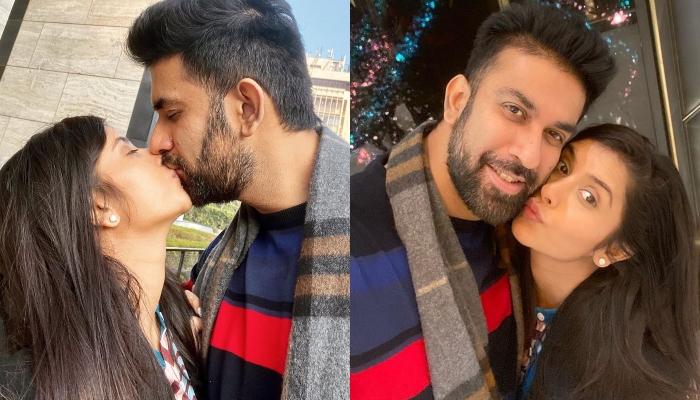 Dilli Ki Sardi, garam chai and foggy mornings can leave a mark on you even with your warmest sweaters on. If you are visiting Delhi in this romantic season then brace your heart for a lifetime experience that will be clinched in your memory forever. No matter whether you are a winter person or not, Delhi's winter can cast its magic spell on you. From chai at North Campus to chaat at Chandni Chowk and spending your lazy afternoons at Deer park, it is indeed, the right way to experience Delhi's beauty. And the recent one to fall in love with Delhi's splendid weather is television actress, Charu Asopa and her husband, Rajeev Sen. (Recommend Read: Mohena Kumari Singh's 'London Thumakda' With Hubby, Suyesh Rawat Makes Us Wonder Who Did It Better)

Before we take you further into the story, let us take a recap of Rajeev and Charu's wedding. On June 16, 2019, Rajeev and Charu had tied the knot in Goa and their wedding celebration was full of fun elements that depicted their love story beautifully. We still remember the couple's white-themed engagement and how beautiful they looked. Since then, their Instagram feeds are filled with mushy pictures and adorable love notes. The duo knows how to make each other feel special and we cannot stop gushing over their in-love pictures.

Today, on January 22, 2020, Rajeev and Charu are enjoying their time in Delhi and the former took to his Instagram handle and shared pictures and videos of his day. In one of the pictures, we can see Rajeev and Charu indulging in a liplock. Alongside it, Rajeev wrote, "Romantic day with my wife  #bozolove #dillikisardi #soulmates." Take a look at the pictures below:

A couple of days ago, Rajeev and Charu had celebrated their first Lohri together as a married couple. Charu had taken to her Instagram handle and had posted a series of pictures from her first Lohri celebration with husband, Rajeev Sen. The actress had captioned the picture as "Our first lohri together."  (Also Read: Armaan Jain Calls His Fiancee, Anissa Malhotra 'Jaan' In His Romantic Instagram Post On Her Birthday)

On January 11, 2020, Rajeev and Charu had completed the first year of their love. They had met each other as strangers on this day and a year after they are lawfully wedded. The actress had penned a heartfelt note and had written, "Happy 1 year babie.I still remember when I saw u on 11th Jan 2019 for the first time, a tall and handsome gentleman coming out of the lift of Oberoi mall. Kal ki baat lagti hai... when we met we were strangers but today we are Mr and Mrs sen. It was all destined."

In an interview with The Times of India, Charu had opened up on her relationship and how she fell in love with Rajeev. She had shared how life played its game, "After our first meeting, we had decided to catch up again over coffee, but I left for my hometown, Bikaner. I was on a much-needed break after my show, Jiji Maa, ended. In fact, I hadn’t decided when to return. However, as luck would have it, I was offered KarnSangini and had to report on the set the very next day."

She had further added, "I texted Rajeev from the set and told him that we could meet for coffee. I had assumed that the meeting would end in half an hour. However, we went on talking for hours until I told him that I had to leave as I had an early call time the next day. We started chatting, spending time together and the rest, as they say, is history. I don’t know if I can call it, love at first sight, but it looks like that." (Don't Miss: Richa Chadha Reveals Details About Her Wedding With Beau, Ali Fazal, Says, They Are In A Happy Space)

Well, we cannot wait to see more pictures from Rajeev and Charu's Delhi visit! What about you?

The key to a 'happily ever after' is that we should always choose the right person. No matter how much energy, effort, and time you invest, if the person is not right, the relationship will not work. However, the moment you fall for the right person, they turn your life into a