Radhika Merchant Poses With Her Mom At 'Mehendi', They Wore Custom-Made 'Buti'-Embroidered Outfits

On January 16, 2023, Radhika Merchant had her mehendi ceremony, and pictures from the same are going viral on the internet. Check out the bride-to-be's gorgeous picture with her mom, Shaila Merchant!

The wedding season is here, and we all have been waiting to witness some of the grand festivities of this year. Well, the next in line to join the bandwagon of the married tribe is Mukesh Ambani and Nita Ambani's younger son, Anant Ambani, who is all set to tie the knot with his ladylove, Radhika Merchant. For the unversed, the duo had their roka ceremony on December 29, 2022, followed by a post-engagement party at their plush home, Antilia. On January 16, 2023, Radhika Merchant had her mehendi ceremony, and pictures from the same are doing rounds all over the internet.

A few moments back, we got hold of a beautiful picture of Radhika Merchant with her mother, Shaila Merchant from the former's mehendi ceremony. The bride-to-be opted for a gorgeous ensemble from the shelves of Abu Jani Sandeep Khosla, which comprised a flared skirt, a matching blouse and a dupatta. Her custom-made multi-colour resham lehenga was embroidered with floral bootis and mirror-work. On the other hand, flaunting her love for the designer duo, Radhika's mom also chose a purple-hued outfit with intricate multicoloured booti embroidery. Shaila's full-sleeved top featured scalloped detailing, which along with her diamond jewellery, accentuated her look.

Recommended Read: Twinkle Khanna Recalls Telling Akshay Kumar That She Would Never Marry Him On Their 5th Date

Anant Ambani's bride-to-be, Radhika Merchant looked ethereal in a dreamy fuchsia pink lehenga as she got her hands etched with henna on her mehendi ceremony. Her vibrant pink lehenga featured intricate floral embroidery in contrasting hues of orange, green and blue. Radhika exuded elegance as she sat against a marigold-decorated backdrop and enhanced her look with rosy pink makeup. Moreover, she opted for a braided hairdo to complement her outfit and added a touch of Baby’s Breath flowers to amp up her hairstyle.

On January 17, 2023, we stumbled upon a beautiful picture of Radhika Merchant from her pre-engagement mehendi ceremony. The picture showed the bride-to-be was seen kissing her sister, Anjali Merchant's baby bump as the camera clicked them. Anjali can be spotted standing next to Radhika, who was sitting on a chair and flaunting her henna-clad hands. For her sister's mehendi ceremony, Anjali opted for a heavily embellished green-hued satin sharara suit paired with a matching dupatta. To complete her look, the mommy-to-be opted for dewy makeup and diamond jewellery and looked absolutely stunning. On December 29, 2022, Anant Ambani got engaged to his longtime sweetheart, Radhika Merchant, in an intimate ceremony at Shrinathji Temple in Nathdwara, Rajasthan. Reportedly, Anant had proposed to Radhika in the same place, a few years back, and now, they have finally got hitched. For the ceremony, Radhika opted for a pink suit paired with a scallop-bordered dupatta and completed her look with floral haath phool. On the other hand, Anant complemented her in a purple-hued kurta. 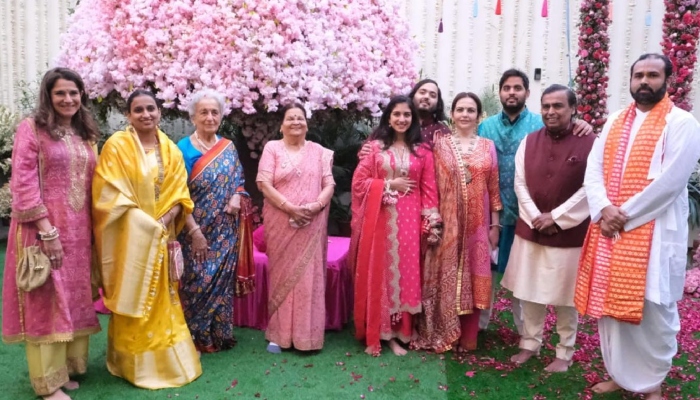 In one of the pictures shared by one of Ambani's fan pages, we can see Nita Ambani twinning with her to-be-bahu, Radhika Merchant's mother, Shaila Merchant. The ladies were seen donning pink-hued bandhani suits with gotta-patti work on its neckline. While Nita styled her look with a matching dupatta, Shaila accessorised it with a cream-hued sling bag. 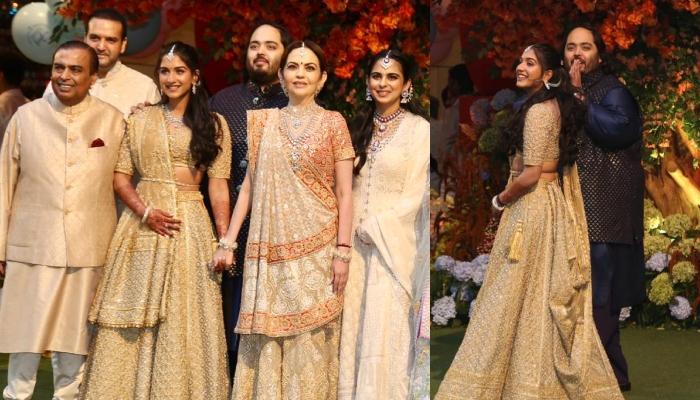 The much-awaited moment has finally arrived as the lovebirds, Anant Ambani and Radhika Merchant got engaged following age-old traditional ceremonies on January 19, 2023. Ever since Mukesh Ambani and Nita Ambani's younger son, Anant's dating rumours with the daughter of Viren Merchant, the CEO and Vice Chairman of Encore Healthcare and his