Given the present circumstances, Priyanka Chopra Jonas' brother, Siddharth Chopra and Ishita Kumar's wedding has been called off, with the latter deleting all of their couple pictures from Instagram.

Marriage is the beautiful bond between two souls and if you are an Indian, before tying the knot, you will be rokafied with your partner! The significance of roka ceremony is when a to-be bride and groom, in the presence of all their family members finalise their wedding. And in turn, they are bestowed with gifts from their in-laws. A roka ceremony confirms that your marriage is about to take place and thus starts the preparations. But what if, due to a mishap the ‘finalised bond’, roka ceremony gets called off? Something similar happened to Priyanka Chopra Jonas’ brother, Siddharth Chopra not once, but for the second time. (Do Read: Ayushmann Khurrana's Kids Are Not Allowed To Watch His Films And The Reason Will Shock You)

It was on February 2019, hardly two months after Priyanka Chopra Jonas and Nick Jonas’ wedding ceremony, came about the first-ever pictures from her little brother, Siddharth Chopra’s roka ceremony. Priyanka had shared a heartfelt post, congratulating Siddharth Chopra and his ‘then’ soon-to-be-missus, Ishita Kumar on their roka. Sharing a picture of the then just-rokafied couple, PeeCee had written, “So proud of my baby brother. Ishita welcome to the family...you are so beautiful together...I wish you both the best for the future! Happy Roka!! @ishittaakumar @siddharthchopra89.” Siddharth Chopra and Ishita Kumar were rumoured to be wedded off on the last week of April 2019, but instead, the latter had posted pictures of herself from a hospital. The pictures that she had shared indicated that Ishita had just undergone a painful surgery. She had written, “Recovering from surgery. Very painful but glad it's over.” A few days back, a report by a leading tabloid suggested that Siddharth and Ishita’s wedding has been delayed but not cancelled. 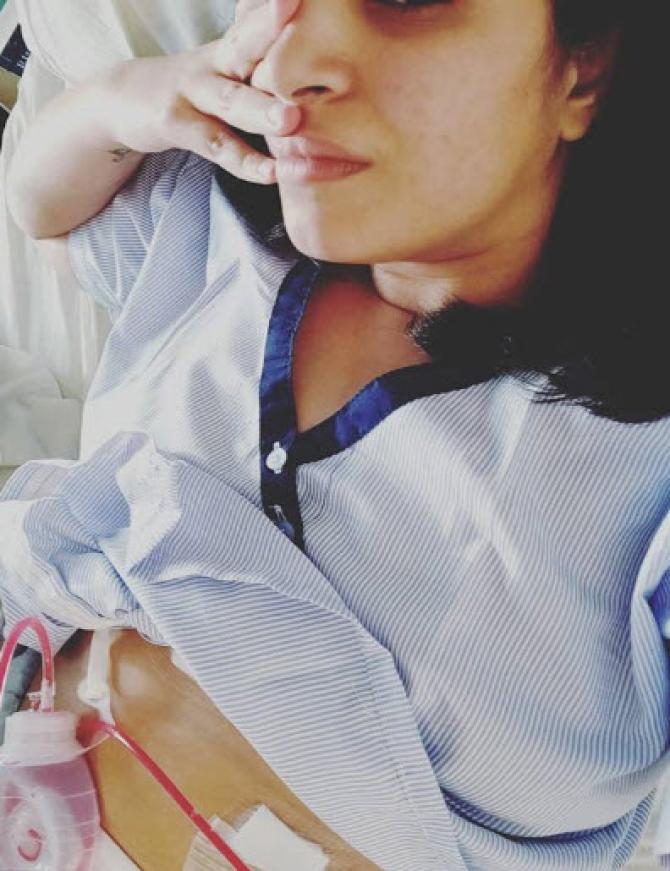 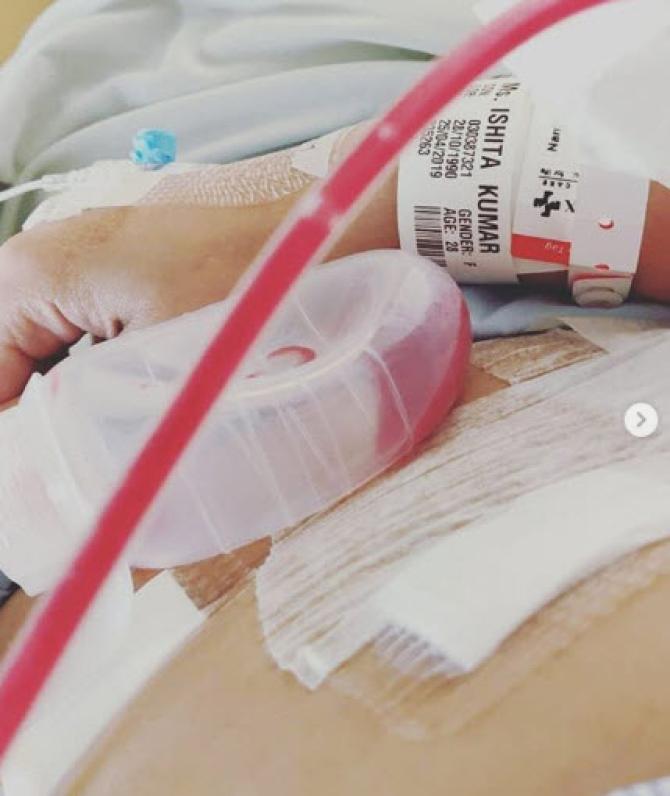 But given the present circumstances and as looks like it, Siddharth Chopra and Ishita Kumar’s wedding has been called off, with the latter deleting all her pictures with Siddharth Chopra from her Instagram account. Priyanka Chopra Jonas and Siddharth Chopra too, have unfollowed Ishita Kumar on Instagram. Post Ishita’s recovery pictures from the hospital, she had posted a picture herself and had captioned the picture as, “Cheers to new beginnings. With a goodbye kiss to beautiful endings.” While this cryptic caption hinted at a possible breakup, Ishita’s parents’ comments on her post definitely added to the fire. While her mom wrote, “Close old book and write”, her dad reacted, “We are with you; Feel the expanse of the universe and be the star you were born to be.” Here is the screenshot of the same: (Must Read: Virat Kohli's Gentlemanly Love For Anushka Sharma On Their Candlelight Dinner Date Is So Endearing) It was on May 02, 2019, when the Bombay Times had contacted Madhu Chopra for details about the whereabouts of the ‘postponed/cancelled’ wedding. The star mommy had shared with the portal, “We are disappointed but what can you do when a person is unwell? We wish Ishita a speedy recovery.” About the cancellation of Siddharth and Ishita's wedding altogether, Mumbai Mirror had many a time, tried to contact Madhu ji and her team but they chose not to comment. About Siddharth Chopra and Ishita Kumar’s roka ceremony, the latter had shared a handful of pictures on her Instagram stories. The one which had caught our maximum fancy had a beautiful note written by Ishita’s nanad and nandoi, Priyanka Chopra Jonas and Nick Jonas and the other picture had the package of gifts, wrapped in white and golden. The note could be read as, “Dear Ishita, just some fun things to welcome you. It’s a kit to be a bride. We love you.” Take a look at Priyanka and Nick’s gifts for Ishita Kumar: 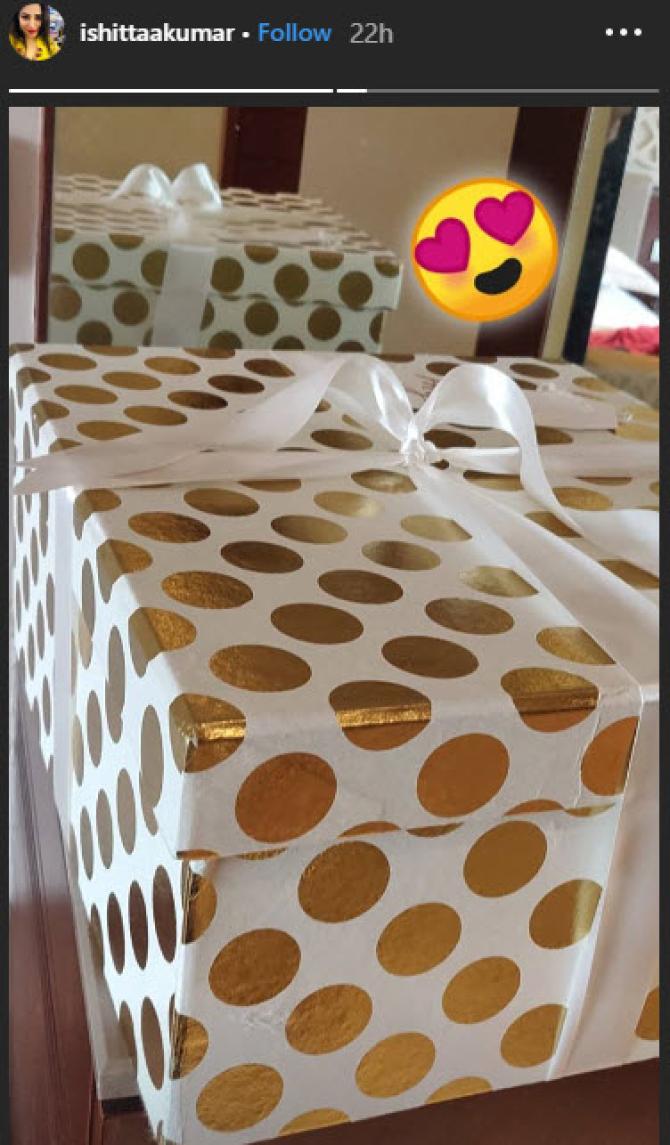 Prior to getting rokafied to Ishita Kumar, Siddharth Chopra was in a relationship with another lady named Kanika Mathur. After getting engaged in an intimate roka ceremony in October 2014, Siddharth and Kanika were speculated to marry in February 2015 in Goa, and the preparations had also begun in full swing. Reports also had it, that Siddharth's superstar sister, Priyanka Chopra herself was taking a personal interest in the wedding preparations, ensuring everything to be perfect. But soon enough, Siddharth and Kanika's relationship went kaput and a source close to the family had then revealed, “Siddharth wants to concentrate on his career and his new venture (a pub-lounge in Pune). Pushing it ahead was a big decision for both the families. Priyanka is also not in the country at the moment and the wedding cannot take place without her." However, after dating each other for 3 years, Kanika Mathur and Siddharth Chopra had decided to settle down. Apparently, the now ex-couple were to tie the knot in Goa and Siddharth had also gone to oversee the wedding preparations. Sharing an update about the same on his Facebook page in December 2014, Siddharth had written, "Wedding plans. Early Morning flight to Goa." However, a few weeks later, another post from his account, which had left everyone confused said, "Single. Ready to mingle. Go Goa Gone. Wish everyone a very happy 2015." (Also Read: Priyanka Kalantri Gives Maternity Fashion Goals For Mommy-To-Be With Her Off-Shoulder Dress) But looks like all’s well that ends well! Siddharth Chopra and Ishita Kumar, we wish you all the happiness in your respective lives.