There have been rumours about Priyanka Chopra's brother being engaged to Neelam Upadhyaya. But Neelam's witty response brings a completely different picture in front of everyone. Take a look. When you are related to some Bollywood celebrities, your personal and professional life gets unwanted media attention. But when you are Bollywood diva, Priyanka Chopra's brother, then the attention will automatically shift on you. Priyanka Chopra’s brother, Siddharth Chopra’s love life has always been in the limelight for his link-ups and breakups. Some time back, we had received the confirmation of Siddharth Chopra’s wedding being called off with his rokafied fiancée, Ishita Kumar. (Recommended Read: Melvin Louis Shares The Recorded Telephone Conversation With Ex Sana Khaan And How He Is A Victim)

Now according to the recent rumours and reports, there's a new lady in Siddharth Chopra's life. He has recently attended a beauty pageant with his mother, Madhu Chopra and rumoured girlfriend, Neelam Upadhyaya. The paparazzi were quick to spot a ring on Neelam’s finger and now all the headlines are about their engagement rumours. However, the lady has herself responded on the on-going rumours

Recently, Siddharth Chopra was spotted with his mother, Madhu Chopra and rumoured girlfriend, Neelam Upadhyaya at a beauty pageant. Everything was going fine until the shutterbugs found a ring on Neelam’s finger. The rumour mill and fans across the social media platforms have started churning their engagement rumours. However, it was Neelam, who has clarified the reports and assumptions after giving a witty reply in the comments section of the pictures shared by celebrity photographer, Viral Bhayani. She commented, "The ring is on my right hand. We aren't engaged." (Don’t Miss: Isha Ambani Hosts A Holi Bash, 'Bhabhi', Shloka Mehta Looks Gorgeous In A Colourful Ensemble)

Well, the comment from Neelam has clarified that they’re not engaged but are they’re in a relationship? Well, to answer this question, we have to take their previous meetings and outings into consideration. The rumoured couple was first to come into the limelight at Ambani’s grand Ganesh Chaturthi celebration party. While an array of popular Bollywood celebrities had arrived in their best avatars, Siddharth Chopra had entered the venue with a ‘mystery lady’, twinning with him in shades of blue. The lady accompanying Siddharth was none other than Neelam Upadhyaya. They had posed for the camera as they had made their entry to the mansion together. We had also noted that it was the first official picture of Siddharth with another ‘miss’ post his broken engagement with ex-fiancee, Ishita Kumar. Here’s a picture of the duo:

For the uninitiated, Neelam Upadhyaya is a South Indian actress and is steadily rising to fame in the industry. Just as our interest towards these two grew, Siddharth had taken to his Instagram and had posted a picture from one of his party scenes, in which we had spotted his rumoured ladylove, Neelam, mommy, Madhu Chopra, VJ Anusha, television actress, Puja Banerjee present in the frame. Siddharth had captioned the picture as “Crazy 30. #dirtythirty... life’s greatest gift is having family and close friends. Great start into my thirties.”

Talking about Siddharth’s turbulent past in terms of his love life, then it was on February 2019, hardly two months after his sister, Priyanka Chopra Jonas and Nick Jonas’ wedding ceremony, when the first-ever pictures from her little brother, Siddharth Chopra’s roka ceremony came about. Priyanka had shared a heartfelt post, congratulating Siddharth and his ‘then’ soon-to-be-missus, Ishita on their roka. Sharing a picture of the then just-rokafied couple, PeeCee had written, “So proud of my baby brother. Ishita welcome to the family... you are so beautiful together... I wish you both the best for the future! Happy Roka!! @ishittaakumar @siddharthchopra89.”

But after some time, the two had broken up and is the second time when Siddharth Chopra’s wedding has been called off. Before getting rokafied to Ishita Kumar, Siddharth was in a relationship with another lady named Kanika Mathur. After getting engaged in an intimate roka ceremony in October 2014, Siddharth and Kanika were speculated to marry in February 2015 in Goa, and the preparations had also begun in full swing. Reports also had it, that Siddharth's superstar sister, Priyanka Chopra herself was taking a personal interest in the wedding preparations, ensuring everything to be perfect. But soon enough, Siddharth and Kanika's relationship went kaput and a source close to the family had then revealed, “Siddharth wants to concentrate on his career and his new venture (a pub-lounge in Pune). Pushing it ahead was a big decision for both the families. Priyanka is also not in the country at the moment and the wedding cannot take place without her." (Also Read: Kareena Kapoor Khan's Unseen Childhood Picture Has An Uncanny Resemblance To Her Son, Taimur)

Do you think Siddharth and Neelam look great together? Let us know! 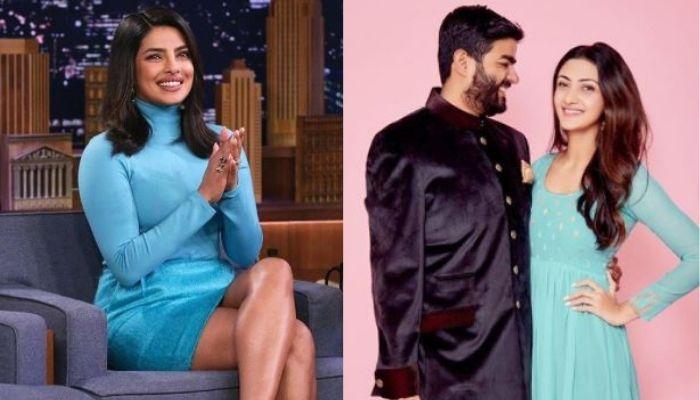 Being accepted by the family of your partner is like crossing the toughest hurdle of your love life. And Priyanka Chopra Jonas’ alleged bhabhi, Neelam Upadhyaya is a lucky girl as she is accepted by the entire Chopra clan. Priyanka’s brother, Siddharth Chopra’s love life has always been in the limelight