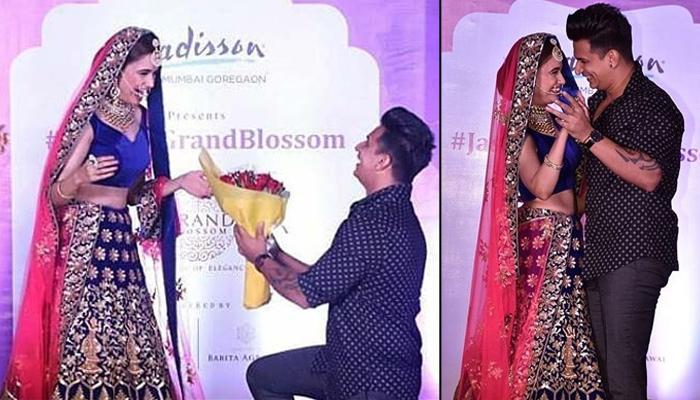 Ex-Bigg Boss contestants, Prince Yuvika Narula and Yuvika Chaudhary are going strong since they exited the Bigg Boss house. While this newly-engaged couple is all set to take their wedding vows by the end of this year, they are making us believe that fairy tale romance exists. After they couldn’t stop flaunting their engagement rings on social media, Prince was spotted with a tattoo of his princess, Yuvika’s name, written in Hindi, inked on his back.

Yet again, another adorable gesture of Roadies Xtreme’s gabru jawan Prince Yuvika Narula has made the headlines. During a wedding show exhibition for Grand Blossom Boutique in Mumbai, Yuvika walked down the ramp as a showstopper in a bridal attire for the designer, Preety Agarwal. Prince was seated in the front row and was awestruck seeing Yuvika walking down the ramp. Then they both blew kisses to each other. Yuvika shared a video from the night on her Instagram handle, and captioned it, "Last night show was fun @preetyagarwal event by. @kanikasindhi".

While the ecstatic fiancé couldn’t control himself from getting up on the stage and hugging his lady-love in the bridal avatar, MTV Roadies and Splitsvilla winner went down on his knees, presented the love of his life, Yuvika with a bouquet and proposed her. Amidst the cheering from the crowd, Prince and Yuvika shared some romantic moments on-stage and danced on the track Dil Diyan Gallan from the film, Tiger Zinda Hai. (Also Read: 'Bhaiya' Rannvijay Singha Reveals How Fiancee Yuvika Chaudhary Has Changed Prince Narula As A Person)

A post shared by BollywoodIndialove (@bollywoodindialove) on May 20, 2018 at 3:03am PDT

Yuvika was dressed in a navy blue and pink lehenga with golden motifs. She couldn’t stop blushing the whole time. It is not the first time when Prince proposed to Yuvika. Prince and Yuvika’s love story blossomed in the Bigg Boss 9 house and it was inside the house itself where he proposed her for the first time. And since then, Prince and Yuvika have been head over heels in love with each other. Initially, they kept their relationship under the wraps but in January 2018, they announced their engagement on social media. (Also Read: After Their Engagement, Prince Narula And Yuvika Chaudhary's Wedding Date Is Out) 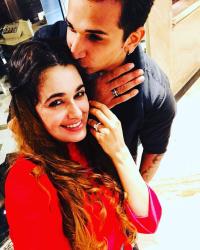 Talking about the tattoo that Prince surprised her with, Yuvika was quoted as saying to the Indian Express, "It was the most beautiful surprise for me when I saw the tattoo. And I must add that I completely loved it." In an earlier interview, Yuvika stated that Prince treats her like a princess and revealed how he proposed her for marriage. She shared, "You won't believe what drama he did. Just a few days before the engagement, he was like it's all over and I was like this is it that he has changed. I was crying for the whole week and didn't step out of the house. His attitude was changed and I said to myself that when I was completely in love with him, he wants to end and this is not the Prince I know. And then came the surprise when he proposed me for marriage. Prince made me feel like his princess."

Well, it goes without saying that Prince Yuvika Narula is giving out some major boyfriend goals to all the boys out there.

Next Read: Taimur Ali Khan Leaves Mom Kareena's Hand To Pose For The Cameras As She Tries To Pull Him Away Cutest couple of Indian television, Prince Narula and Yuvika Chaudhary walked down the aisle on October 12, 2018. For the ones who don’t know, Prince and Yuvika met on the controversial reality show, Bigg Boss. Where Prince was sure of Yuvika as his partner, Yuvika, on the other hand, like