Prime Minister, Modi ji wrote a letter to MS Dhoni post his retirement congratulating him on his accomplishments. Scroll down to read it!

Once in a generation, a player comes with whom the entire country connects on a level that he becomes family to each and every citizen of the country! And when he bids farewell to the game, the entire nation mourns for him. Cricket is not just a sport, but a religion in India, and the name, MS Dhoni is synonymous to God for cricket fanatics. What's beautifully strange is the fact that the madness for MSD is not limited to cricket lovers or bound to his contribution to cricket. The love people have for him goes far beyond the boundaries of him being a cricketer, and reflects on him being a humble and grounded person even when the world worships him! (Recommended Read: Kangana Ranaut Speaks On Sushant's Breakup With Sara Ali Khan, Recalls Her Bond With Hrithik Roshan)

You know you're MS Dhoni when you announce the end of your glorious 16-year long career discreetly, without calling a press conference or making a fuss about it. By posting a video compiled of some iconic moments of your career, with a song in background which had brought tears in the eyes of 130 crore Indians. Known for his accurate decisions on-field, MSD had made one mistake in the end. And that was, choosing, 'Mai pal do pal ka rahi hu, pal do meri kahani hai' song for himself. For, in no way those lines can describe MSD! Our honourable Prime Minister, Modi ji wrote a letter to MS Dhoni post his retirement, congratulating him on his accomplishments. Scroll down to read it!

Ziva Dhoni Misses Daddy Dhoni, Shares The One Thing That She Is Missing The Most Doing With Him 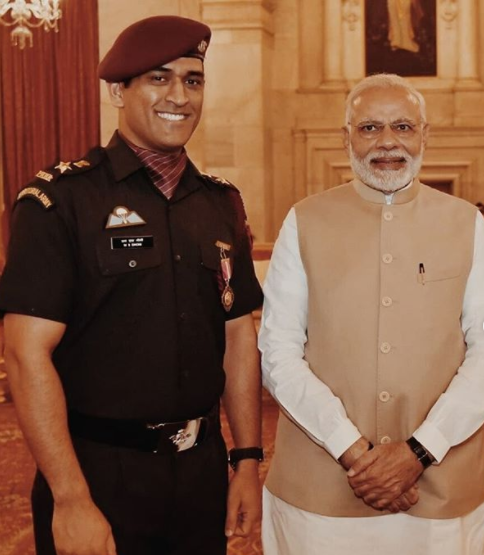 MS Dhoni took to his Twitter handle to express his glee on receiving an appreciation letter from Prime Minister, Narendra Modi post his retirement. Along with the snaps of the letter, MS wrote a touching note which said, "An Artist,Soldier and Sportsperson what they crave for is appreciation, that their hard work and sacrifice is getting noticed and appreciated by everyone.thanks PM @narendramodi for your appreciation and good wishes." PM Modi started off his letter by saying, "On 15th August, in your trademark unassuming style, you shared a short video that was enough to become a long and passionate discussion point for the entire nation. 130 crore Indians were disappointed but also eternally grateful for all that you have done for Indian cricket in the last decade and-a-half." (Also Read: Raj Kundra Explains The Relationship With His Wife, Shilpa Shetty Kundra In 'Just Two Computer Keys') 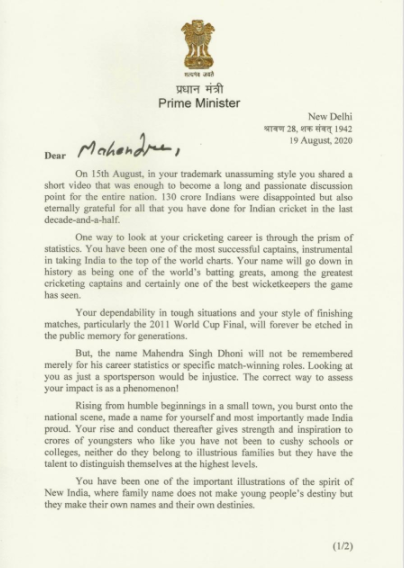 Modi ji further stressed on how our background and from where we come doesn't matter as long as we're focused on our goal, this is something that MSD has taught us over the years. His letter further read, "Where we come from does not matter, as long as we know where we are headed - this is the spirit that you have exuded and inspired many youngsters with." Going further in his letter, Modi ji talked about how once he had seen a picture of Dhoni playing with his daughter, Ziva, while the rest of his teammates were busy celebrating their victory in a tournament. He said, "I remember seeing a picture of you playing with your cute daughter even as everyone around you was celebrating a victory in a particular tournament! That was vintage MS Dhoni." 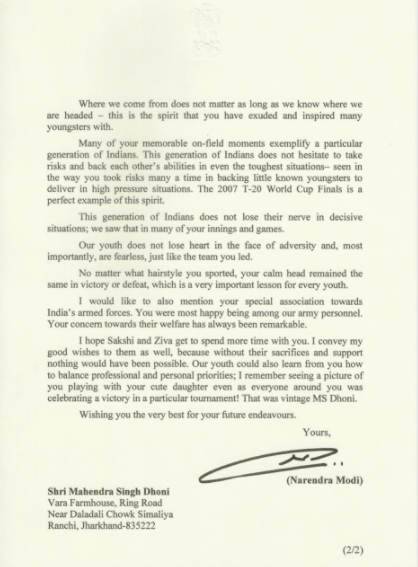 MS Dhoni's wife, Sakshi Dhoni had also penned an appreciation post for him. Sharing a picture of Dhoni's back as he was gazing at the greenery, she had written, "You should be proud of what you have achieved. Congratulations on giving your best to the game. Congratulations on giving your best to the game. I am proud of your accomplishments and the person you are! I am sure you must have held those tears to say goodbye to your passion. Wishing you health, happiness and wonderful things ahead. "People will forget what you said, people will forget what you did, but people will never forget how you made them feel." — Maya Angelou." (Don't Miss: Sania Mirza's Sister, Anam Mirza Shares Her Wedding Story, Gives A Glimpse Of Her Dreamy 'Nikah') Well, there is indeed, only one MS Dhoni. We miss you, Mahi!