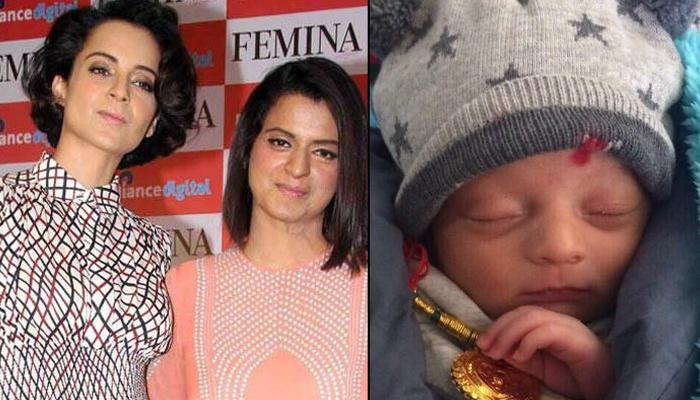 She is one of the highest paid actresses in the industry, with three National Awards and some well-acclaimed films in her kitty. She has always made the headlines for the professional controversies. We are talking about none other than Simran actress Kangana Ranaut. And one person who stood with her through all thick and thin is her sister, Rangoli Chandel.

Kangana became maasi to Rangoli’s son, Prithvi Raj Chandel on November 14, 2017. Introducing Prithvi to the world, Rangoli took to her Twitter account and tweeted, “Dear friends meet our son Prithvi Raj Chandel.” And now, she shared a lovely picture of maasi Kangana kissing her nephew, and captioned it, “Massi and kiddie !!!!”

Aren’t they adorable? In an interview with Femina, Kangana talked about the bond she shares with her sister, Rangoli and said, "Rangoli has never been an ambitious person. She has always had a close set of people that she cares deeply for and confides in. And today as a mother to her baby (Prithviraj), she is even more exclusive. This baby is the centre of Rangoli’s existence today. Sometimes I only get to talk to her once in three days." (Also Read: After Soha Posted Inaaya And Taimur's Picture, She Applied Kohl On Her Daughter's Forehead)

She further added, “I feel bad that her priorities have changed today (smiles). And I don’t have the attention, love and companionship that I had received from her in the past. It was a big shift for me when Rangoli decided to separate and move back to Manali with her husband (Ajay) to concentrate on her family life. They are also building a hotel there. My nephew is cute and it was a special feeling when I held him for the first time because he bears an uncanny resemblance to Rangoli and me. But I cannot deny that I miss the old days with my sister.”  (Also Read: Celina Jaitly Shares The First Picture Of Her Third Son, 6 Months Old Arthur Jaitly Haag)

Kangana also shared if she believes in marriage or not, and said, “I do. I definitely want to get married. I’m thinking more and more about finding a solid relationship and having a family. Meeting the right guy is on the to-do list. Frivolous dating and going for midnight walks and drives are not things that interest me anymore. I want to have children, but my work will always be my first baby. Actually, Prithvi is as good as my own baby." (Also Read: Ex-Couple Karisma Kapoor And Sunjay Kapoor Came Together To Celebrate Their Daughter Samiera's B'day)

The 3-months-old kiddo seems to be the next internet sensation, courtesy his cute pictures posted by Rangoli on her Twitter account. Sharing the below picture, Rangoli captioned it, “Little Mr. Chandel is Busy thinking, how do I make my monotonous day ( eat, sleep and poop ) Little more interesting!!!!” And when Prithvi turned 13 days old, Kangana’s sister Rangoli and brother-in-law, Ajay organised a traditional ceremony (Gantryala) to celebrate the birth of their son.

On the professional front, Kangana has two films in her kitty, Manikarnika: The Queen of Jhansi and Mental Hai Kya opposite Rajkummar Rao. Talking about her upcoming film, Mental Hai Kya to Mid-Day Kangana revealed, “The way my life unfolded in the past few years, I realised there was so much stigma attached to being different. ‘Mental’ or ‘psycho’ were the terms used to shame me, but these can’t be used casually as swear words. When this script came along, I knew I had to do it to break the stigma around it. High time we made individuality aspirational.”

We are totally in awe of maasi Kangana and nephew Prithvi’s picture. Thank you, Rangoli for sharing such a priceless moment with all your fans!

Next Read: Saif Wanted To Change Their Son, Taimur's Name To 'Faiz' And Kareena's Reaction Was Surprising