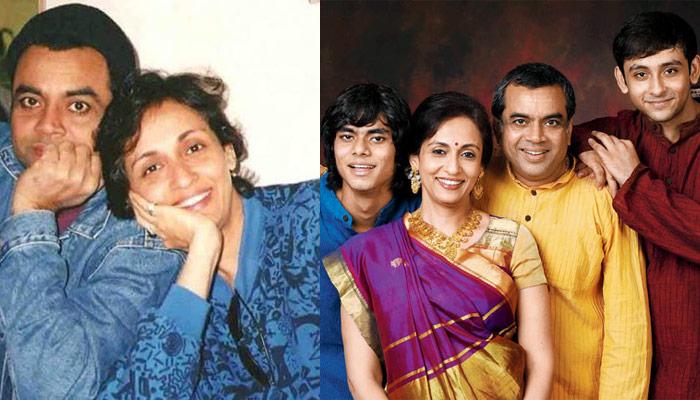 ‘Coup de foudre’ or 'love at first sight' happens to only a few lucky ones. Knowing that the person you are looking at right now, is going to be your partner for life is an amazing feeling.

We have for you, here, the love story of two such lucky birds who fell in love the moment they laid their eyes on each other. We are talking about the versatile actors, Paresh Rawal and Swaroop Sampat. Here is their love story:

Paresh Rawal and the former Miss India, Swaroop Sampat, have always been theatre enthusiasts and this is what brought them closer. Paresh saw Swaroop for the first time when they were in the college. He instantly told his friend that he is going to marry this girl which Swaroop chose to ignore.

“I was wearing a pink saree and I was handing out brochures. And Paresh walks in with his friend and he says, he is going to marry me. But you know he is so dumb, he didn’t talk to me for nearly a year.”

Swaroop gave no notice to Paresh when they first met, but couldn’t take her eyes off him when she saw his performance at an intercollegiate play. Swaroop gushed:

“I saw him in a play, it was an intercollegiate play, and he was awesome. I mean to see Paresh Rawal on stage is something else. The intercollegiate competition was on, I was in another college, and this play comes on and Paresh is there. It was filled with violence and bad language. When the play got over, the whole audience was just sitting like that, because they don’t know what hit them. And then, everybody just got up and walked out.”

Swaroop then went to see Paresh backstage to congratulate him on such a brilliant performance and the couple hasn’t looked back since then.

Also Read: Alka Yagnik And Her Husband are Living Separately For More Than 25 Years And They Are Still In Love

Swaroop’s father encouraged her to participate in Miss India contest, but Swaroop was reluctant about entering in the pageant. She talked to her brother and Paresh about it, and they both were very supportive. Swaroop said:

“I was so unwilling. I told my brother and Paresh that I did not want to be a part of the pageant. But all Paresh said that it was his responsibility to ensure that she reaches the venue.”

Swaroop went on to win the pageant but all was not well in her personal life because of it. Swaroop admitted:

“After that, Paresh was a little sceptical about our relationship. He thought that things would change.”

But later on, everything fell in the right place and Paresh asked Swaroop’s father for her hand in marriage.

Also Read: Here Are Are A Few Things You Probably Never Knew About Tabu

Paresh and Swaroop met in the 1970s and dated throughout the 80s. They saw their careers flourishing and later decided to tie the knot. According to Paresh and Swaroop, the best thing about their relationship was that not a lot of people knew about it. They had a really intimate wedding with only the near and dear ones in attendance. They got married in 1987 and it was an amazing affair. Swaroop enthused:

“I thoroughly enjoyed my wedding. It took place in the Lakshmi Narayan temple compound in Mumbai. We had around 9 pundits chanting shlokas for us and an elaborate vidhi. Unlike most brides, I enjoyed the food too. My family was witnessing a daughter’s wedding after 129 years and so I had instructed them not to be emotional.”

It was a one of a kind wedding with no mandap. The couple took vows under the shade of big old trees.

Also Read: Met, Fell In Love But Soon Parted Ways To Only Realise That They Can't Live Without Each Other

The couple has two amazing sons, Anirudh and Aditya. Just like their parents, these two young guns are also creative thinkers. Anirudh was one of the assistant directors of the movie, Sultan and also assists Naseeruddin Shah in his plays. Aditya is studying screenplay at the University of New York. Paresh is the worrier among the two and remains awake until his sons are home.

Swaroop and Paresh have been together for more than 40 years but have never seen a dull day. The two support each other in their endeavours. We hope that they have many more happy years ahead.

NEXT READ: Dharmendra Converted Into Islam To Get Married To Hema As His First Wife Refused To Give Him Divorce