Niti Taylor Goes On Candle-Light Dinner With Fiance, Parikshit Bawa, Their Blushed Faces Are So Cute

Niti Taylor Goes On Candle-Light Dinner With Fiance, Parikshit Bawa, Their Blushed Faces Are So Cute

Niti Taylor and Parikshit Bawa are enjoying their courtship phase to the fullest, and are often seen going on dates together. Checkout their latest picture! 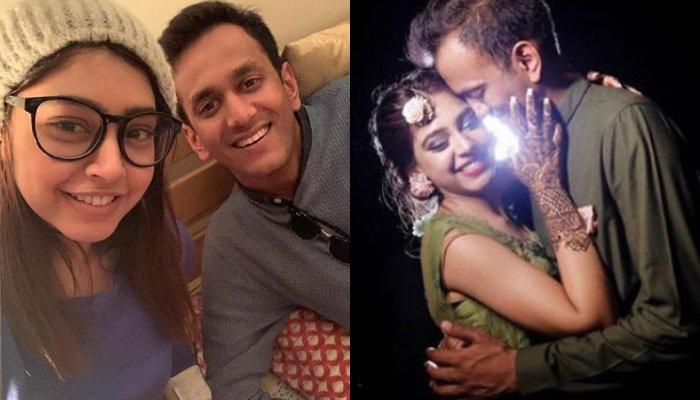 Everyone is worthy of love, but not everybody can find it at the same time. For those of you, who are healing from bruised relationships, take your own sweet time for you will find the greatest man ever! And for those of you who are already with their prince charming, cherish and keep them! As true as it gets, true love will come your way only when you least expect it and that is how surprised we were when Niti Taylor had announced that she is now all taken. One single picture with her beau, Parikshit Bawa was enough to make us go gaga and shared our heartfelt wishes for this new phase in her life. (Do Read: Arjun Rampal And His Girlfriend, Gabriella Demetriades Twin In Black For A Night Out)

It was on August 12, 2019, when Nita Taylor had announced to the world that she is truly, madly and deeply in love. She had posted a picture from what looks like one of her lunch dates with her beau, Parikshit Bawa and had written, "We decided on FOREVER. On the eve of beginning my life's most beautiful moment, I feel all the love and happiness there possibly can be. It only feels complete after letting you all know. I've had your love and support since the past decade and with great happiness, I'd like to inform everyone that I'm getting ENGAGED! We would like to share this moment with you all and seek your blessings and good wishes for this new innings in our lives… #PARTITAYLES.”

Just a day after their announcement, Niti Taylor and her beau, Parikshit Bawa got engaged in a star-studded ceremony in Delhi, the details of which we will share in the later paragraphs to come. Niti and Parikshit are enjoying their courtship phase to the fullest, and are often seen going on dates together. For the uninitiated, Parikshit is a Lieutenant in the army and what looks like it as per her latest Instagram story, he will be away from Niti for a few months and that is the very reason why they looked all happy and blushy at their recent dinner date. This is not the first time when we are getting to witness Parikshit Bawa doing something extraordinarily sweet for his to-be wife, Niti Taylor. A few days back, we had shared with you, an adorable video of Parikshit hiding behind the walls of his fiancee's shoot set in Mumbai, as he had come to surprise him. While we are sure that it was an amazing surprise, Parikshit later took his belle for a 'date night'. (Must Read: An 11-Years Old Alia Bhatt Had A Shy Moment When She Was Asked To Put Her Head On Ranbir's Shoulder)

Now for their engagement on August 13, 2019, the couple had put a ring on each other's finger in Delhi. Donning a silver sequinned lehenga with tassel detailing on the hem of her boat-neck blouse, Niti was a treat to the eyes! Her beau Parikshit, on the other hand, had complemented his soon-to-be-bride wearing a light-hued bandhgala. Innumerous pictures and videos from the fun family event had gone viral on the internet and it was only later when Niti had posted a picture from the same. She had captioned a picture wherein Parikshit was putting a ring on her finger as “He liked it and he put a ring on it #partitayles#engaged#isaidyes.” 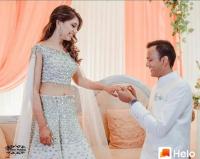 On the very day that Niti Taylor had introduced her fiancé, Parikshit Bawa to her followers, a couple of pictures of the damsel sporting an olive green lehenga and gota jewellery with mehendi-adorned hands created a stir in the media. It later came about that it was a mehendi ceremony for engagement. Niti had then taken to Instagram and sharing their couple hashtag ‘#Partitayles’, had posted a beautiful picture from the same. Mentioning their hashtag, the ‘almost’ Mrs Bawa had written, “To love laughter and happily ever after.” (Also Read: Nick Jonas Praises Wife, Priyanka Chopra Jonas, Gives Couple Goals By Calling Her His Inspiration)

Niti Taylor had revealed her marriage plans in an interview with the Bombay Times. She had shared, "We don’t plan to get married this year. Hopefully, it should happen next year. My fiancé’s job takes him to different places, while I am currently based in Mumbai." Expressing her happiness on not marrying someone from the industry, Niti had continued, "I have always said that I will not marry someone from showbiz. I am happy that I am getting married to a man of my parents’ and my choice." 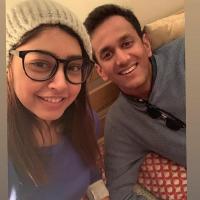 Here's sending truckloads of love and happiness to the couple!