He is tall, handsome and dashing. She is a truly elegant and chic Indian beauty. And, when the two came together, the phrase ‘picture-perfect couple’ never sounded better! Wondering who we are referring to? Well, to cut to the chase, the definition of a big fat Indian wedding got justified when Nikitin Dheer, son of veteran actor, Pankaj Dheer, tied the knot with his ladylove who is also a TV actress, Kratika Sengar, on September 3, 2014.

While, "light, camera, and action" are the three words that these two are used to hearing the most, it was the same setup where the two met. How, you ask? Well, here is all you need to know about this smashingly hot couple’s beautiful wedding journey.

When Thangabali fell in love with Jhansi Ki Rani

It all started when Kratika Sengar, populary known for her famous daily soaps Jhansi Ki Rani and Punar Vivah, was shooting for the movie My Father GodFather. The movie is Nikitin’s father Pankaj Dheer’s directorial debut. She was a regular visitor to Pankaj Dheer's house, and it was there where she met Nikitin. That is when the two met for the first time. It started with a very casual “Hello, how are you doing”, kind of a meeting at first.

A beaming Kratika shares, "It is an arranged-cum-love marriage. I was shooting for Nikitin's father Pankaj Dheer's directorial debut film, My Father Godfather. Nikitin's father then decided to approach my parents and that is how Nikitin and I met. I bonded really well with Pankaj's uncle and Nikitin, and we eventually started liking each other.’’

Kratika and Nikitin had a very short courtship period. But, even with their busy work schedules, the two tried to spend as much time together as possible to get to know each other better. Kratika was also spotted accompanying her beau at the sets of his TV show, Khatron Ke Khiladi. Their love blossomed as they got closer and eventually entered the bond of holy matrimony.

Must Read: 6 Amazing Ways Your Courtship Period Can Make Your Marriage Everlasting Both Nikitin and Kratika, wanted candid photography for all the three functions, so they decided to rope in The Wedding Salad. Some of their images will make you go completely 'awww'!

Also Read: 7 Steps To Get The Best Out Of Your Wedding Photographer

The couple had separate mehendi ceremonies at their individual places. Kratika was beaming in a short pink spaghetti kurta and orange pyjama. At the same time, Nikitin was dressed in a casual light grey coloured kurta pyjama. But, what came as a sweet shock was Nikitin’s surprise visit to his bride Kratika’s mehendi ceremony. The two looked very happy and eager for the D-day to arrive. The mehendi was followed by cocktail and sangeet ceremony, that was held at the Hyatt Regency, Mumbai. The soon-to-be married couple looked elegant and stunning in pastel-hued outfits. 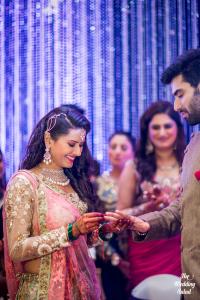 Check out: 10 Hottest Colours For Engagement And Cocktail Gowns This Wedding Season

While Kratika wore a beautiful lehenga, Nikitin chose an Indo-western style attire. The much-in-love couple performed on melodious and romantic dance numbers with their friends and family members.

Among the ones performing were Nikitin’s friends from the TV show, Khatron Ke Khiladi- Karanvir Bohra and his wife Teejay Sindhu, Gauahar Khan, Kushal Tandon, Gurmeet Choudhary and his wife Debina Bonnerjee. Nikitin thanked all his guests, friends and family with this tweet:

“A special thank you to my friends and family, especially, to the acting community who took time out for dance and rehearsals. They truly made the day memorable for both of us!’’

The wedding ceremony was held at ITC Maratha, Mumbai. 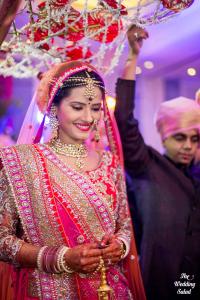 The bride, Kratika, looked nothing less than royalty in a heavily embroidered red-pink-orange lehenga. And, Nikitin picked a classy and chic shimmery off-white sherwani atop red and white kurta pyjama.

Their wedding was a close family affair, with a few close friends, relatives and family members. The ambience was totally majestic with floral décor. The mandap was setup with a huge Ganpati murti (statue) in the background.

Soon after their private wedding ceremony, couple hosted a grand bash for their friends from showbiz. For this occasion, Kratika had done away with her bridal veil and chose to remain in her wedding lehenga, while Nikitin changed into a black formal bandhgala.

The couple's wedding and post-wedding attires were done by designer, Kunal Anil Tanna. The wedding was attended by Bollywood biggies including Hema Malini, Konkana Sen Sharma and Ranvir Shorey, among others.

Among the TV celebs, there was Gauhar Khan and Kushal Tandon, Gurmeet Choudhary and Debina Bonnerjee, Puneet Issar and his wife, actor Shahbaaz Khan with his family, Ronit Roy and wife Manasi Joshi. Kratika and Nikitin’s wedding was a 'larger than life' event. Both their families looked very happy at this union and the event was a huge success.

Must Read: 8 Best Bridal Jewellery Designers In India You Must Stalk For Your Wedding

Soon after the wedding, the couple left for their honeymoon to the breathtaking destination, Switzerland. And, though their extra-busy schedules keep them busy, the two never miss any opportunity to spend quality time with each other.

What the couple has to say about each other Nikitin is a pure soul. The transparency is very visible in him. I always wanted a family like Nikitin's family and I am blessed to have him in my life. I am too excited. Punar Vivah ke baad ab sach mein mera pehla vivah hoga...

Nikitin was quite active on social media during his wedding and kept his fans and friends updated with the wedding proceedings. He also posted comments such as, “A night made special by friends n family – feel happy n blessed – tomorrow a new chapter – a new journey begins with fire as the witness – pure n strong”. Another one was, "Thank u all for the love and blessings. Our special day made memorable by our friends and family and all of u who have been part of the journey.. :)" 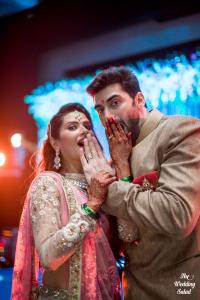 Kratika is currently seen in the television show Kasam, which airs on the Colors TV, and Nikitin was last seen on TV in the show Nagarjuna...Ek Yoddha. While the Chennai Express actor enjoys watching television shows Bhabhi Ji Ghar Pe Hain and May I Come In Madam, he doesn't watch Kratika's show! Reason? Well, he cannot watch anybody else romancing with his wife! Sweet, isn't it?

Both newlywed Nikitin and Kratika were delighted with the way their wedding moments were captured by The Wedding Salad, and so are we. These exclusive images that we recieved from them had some amazing shots of the bride and groom, their wedding preparations, ceremonies and moments that we just cannot get enough of and we were glad to share it with all our readers.

BollywoodShaadis wishes this sweet couple a life full of happiness and prosperity. May their love and bond grow stronger with every passing year. Cheers! 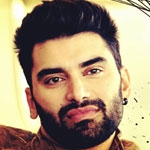