Neeti Mohan and Nihar Pandya got married on February 15, 2019. Nihaar shares a very warm bond with his 'saalis'. Checkout his lunch date pictures with Shakti Mohan and Mukti Mohan!

Ishq Wala Love, Jiya Re, Nainowale Ne, Tune Maari Entriyaan, etc. fame singer, Neeti Mohan walked down the aisle with the man of her dreams and Manikarnika: The Queen of Jhansi actor, Nihaar Pandya on February 15, 2019, which was preceded by the mehendi, sangeet and engagement ceremonies on February 14, 2019. Though the couple kept it a close-knit affair, their wedding was a lavish one in every sense as the venue The Taj Krishna, Hyderabad was the witness. (You May Also Like: Abhinav Shukla Posts A Funny Comment On Rubina Dilaik's Meaningful Post, Her Reaction To It Is Epic)

Making it official on Instagram, the duo took their own sweet time and finally, on February 20, 2019, shared lovely glimpses of their functions and weddingg looks. Neeti and Nihaar wrote a similar caption that could be read as, “With the blessings of family, friends and well-wishers, we are blissfully married. Dad's health is getting better each day. The Mohan and Pandya family THANK YOU for your constant love and support.” A jiju-saali relationship is one such relationship that brims with unconditional love. And such is a bond shared by Nihaar Pandya and all his saalis, Mukti Mohan, Shakti Mohan and Kriti Mohan. Today, on April 10, 2019, Nihaar along with his saalis, Shakti and Mukti were spotted on a lunch date together. Though we missed Neeti Mohan, but the equation of this trio surpassed it all. While Mukti can be seen dressed in her traditional best, Shakti sported a cool look wearing culottes and a black hat. On the other hand, the man with them looked dashing in his blue shirt and cherry colour jeans. Checkout:

After the wedding, Mukti took to her official Instagram handle and shared a lovely click with newly-weds, Neeti Mohan and Nihaar Pandya, along with Shakti Mohan and Kriti Mohan. Along with the same, she had written, "We are 5 Now. @nihaarpandya NJ Zooooo. Yayyyyyyyy Welcome to our Mad Mohan family." Here is the picture she had shared: Not just this, Mukti also congratulated her didi and jiju on social media by sharing a lovely candid snap of the then bride and groom. Along with the same, she had written, “When promises are made with an open heart, we experience the divine rain. @neetimohan18 @nihaarpandya My NeeNis I Love You more than myself. Just like the showers in your wedding, I wish you love, good health, success everything in abundance.” (Also Read: Taimur Ali Khan Rides On Saif Ali Khan's Back As They Leave For Pataudi Palace, Kareena Looks Lovely) 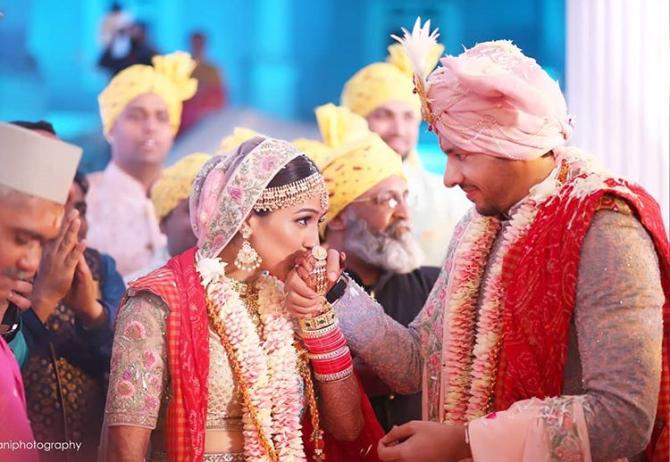 Neeti Mohan had earlier revealed how love blossomed between her and Nihaar Pandya. She was quoted as saying, “We both have strong values and quite similar ones. I think Jimmy knew that, and trust me, he was very sure that we would click. He introduced us at a wedding, where Nihaar was accompanied by his parents. They met me very warmly and there was an instant connect with not just Nihaar but also his family members.” (Checkout: Aishwarya Rai Bachchan's Pic With Jaya Bachchan-Aaradhya Bachchan In One Frame Is 'Happiness Always') 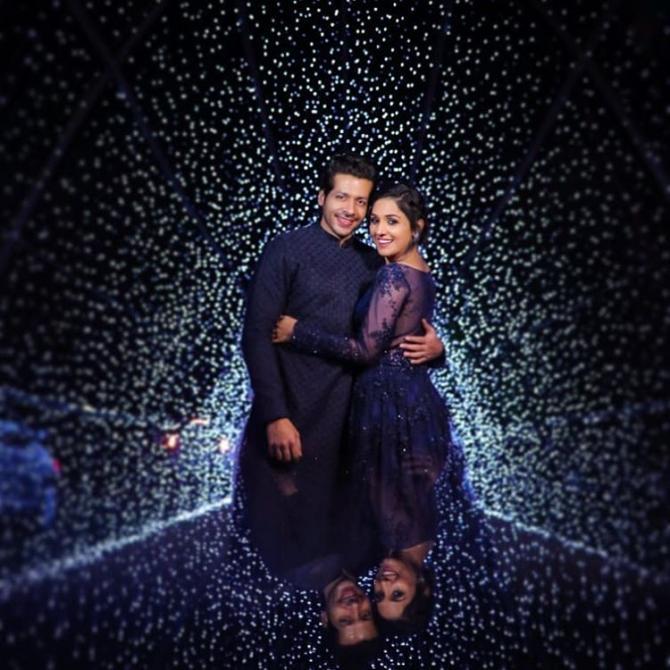 Neeti also revealed how she will be moving in with Nihaar and his parents post their wedding, “I am moving into his house and will stay with his family. And trust me again, I am really looking forward to that.” Well, the couple isn't planning an immediate honeymoon after the wedding. Talking about the same, Neeti had said, “Not decided (about the honeymoon), but it will have to wait. I have a couple of assignments going on.”

How lovely! What do you guys have to say on this mast outing of the jiju and saalis? Do keep us posted!