After captivating us with her wedding pictures, Neha Kakkar shared her reaction on her hubby, Rohanpreet Singh's 'Ex-Calling'. Check it out!

The COVID-19 outbreak had left many girls heartbroken as their dream of turning a summer bride was ruined. But with the wedding season, the wait of getting married to your loved one has turned out to be sweet. And the recent one, who had joined the 'missus tribe' is Bollywood singer, Neha Kakkar. In October, rumours were rife that the actress will soon tie the knot, and everyone was left awestruck when she had introduced the love of her life, Rohanpreet Singh. (Recommend Read: When Madhuri Dixit And Her Hubby, Shriram Nene Had Taken The Accent Challenge In The Lockdown Days)

It was on October 10, 2020, Neha had taken to her Instagram handle and had posted a cute picture with Rohanpreet. The duo was looking super cute as they had twinned in black. Alongside the picture, Neha had written, "You’re Mine @rohanpreetsingh #NehuPreet." Rohanpreet had also shared the same picture, and had written, "Meet My Zindagi! #NehuPreet". 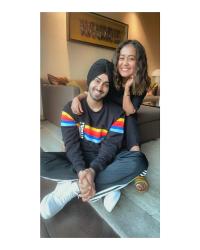 On October 30, 2020, Neha took to her Instagram handle and shared her reaction on her hubby, Rohanpreet's Ex-Calling. Before you start speculating, the singer shared her hubby, Rohanpreet's poster of his upcoming song, Ex-Calling.  Alongside it, Neha wrote, "@rohanpreetsingh's #ExCalling," followed with an angry emoji. Neha Kakkar's brother, Tony Kakkar also commented on it, "Can’t wait for it." Check it out below: 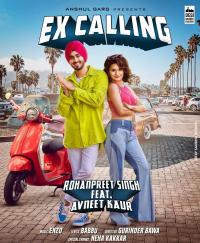 On October 28, 2020, Neha had shared mesmerising pictures from her Gurudwara wedding with her hubby, Rohanpreet Singh. We had loved every picture as it had beautifully shown the union of two pure souls. Alongside it, Neha had revealed that her lehenga and her hubby, Rohanpreet Singh's wedding ensembles were a gift by Sabyasachi. Her caption could be read as "People die to wear #Sabyasachi at least once in life and we were gifted these dream outfits by @sabyasachiofficial himself. Dreams do come true but they work better if you work hard. Thank you Mata Rani, Shukar hai WaheguruJi." (Also Read: Suhana Khan Asks Ananya Panday The Secret Of Never Been Rejected, Posts A Fun Video On Her Birthday)

On October 28, 2020, Neha Kakkar's makeup artist and friend, Ritika Vats had shared two unseen pictures from the former's bachelorette bash. In the first picture, we could see Neha looking gorgeous in a pink glitter dress. She had donned a bride-to-be headgear and sash and it was her expression that had completed her bridal swag as she posed with her friend. In the second picture, we could see her signature smile. Alongside the pictures, Ritika had written, "Bachelorette celebrations for #NehaKakkarthough it was supposed to be posted very first.. butl" 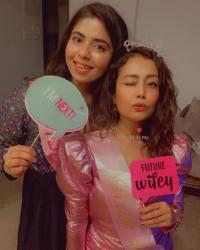 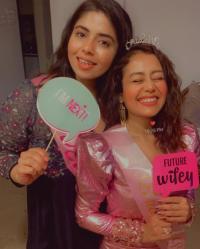 On October 20, 2020, Neha had given a sweet surprise to all her 'Neheart' fans by sharing the first glimpse of her pre-wedding celebrations. In the video, we could see Neha making a grand entry to her roka ceremony with her beau, Rohanpreet. She had looked gorgeous in a pink coloured saree gown. Her look was completed with a maang teeka and a choker neckpiece. On the other hand, Rohanpreet had complemented her in a white and pink indo-western ensemble. (Don't Miss: Namrata Shirodkar Shares Stunning Photo Of Her Hubby, Mahesh Babu From The Sets Of His Next Project)

Well, we are waiting for Rohanpreet Singh's new album after marriage!