Neha Kakkar and Rohanpreet Singh's PDA and mushy comments have not gone too well with the meme-makers as they started trolling them. Now, Neha has hit back at them with a savage reply! 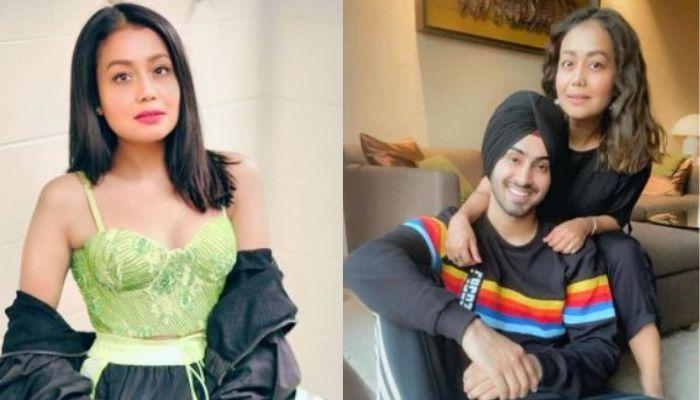 The social media trolling can adversely affect someone’s mental health. The people simply sit behind their gadgets and share their sick ideas in the name of fun. While some memes are good in taste, some often end up hurting people’s emotions. Recently, Neha Kakkar is the new target of trolls as she is soon going to get married to her beau, Rohanpreet Singh. After a lot of speculations, Neha and Rohan had confirmed their relationship, and their PDA and mushy comments on each other’s post haven’t gone too well with the memers as now, they are subjected to trolling. (Also Read: Pregger Anita Hassanandani Craves For Coffee And Wine, Looks Super Cute As She Makes A Puppy Face)

While everyone was excited to witness Neha's wedding with Rohanpreet, speculations were rife, whether they are really getting married or it is just a PR stunt for their music video, Nehu Da Vyah. However, things are pretty clear now as Neha had shared the video of her first pre-wedding ceremony with Rohanpreet. On October 20, 2020, Neha had taken to her Instagram handle and had posted a video from her roka ceremony with her beau, Rohanpreet. She had looked gorgeous in a pink coloured saree gown with a contrasting mint green dupatta on the side. Her look was completed with a maang teeka and a choker neckpiece. On the other hand, Rohanpreet complemented her in a white and pink indo-western ensemble.

While Neha is drenched in love and is celebrating every second of it, her happiness and love-filled nature did not go well with the memer as they started a viral meme over it. Neha is often an inspiration for meme makers, but this time the memers hit her personal life and Neha decided to shut them off. The viral meme takes a dig at her mushy posts for her beau, Rohanpreet. Neha has been using the terms such as ‘babu’ and ‘shona’ for Rohanpreet, which resulted in a meme featuring Leondardo DiCaprio with Neha Kakkar’s face being morphed on a chimpanzee. Neha took it sportingly and sharing the meme wrote, “Hahaha… I’m looking cute but inko koi smajhao! Ab nahi karungi babu shona toh kab karungi bhai?” Take a look at the meme below: 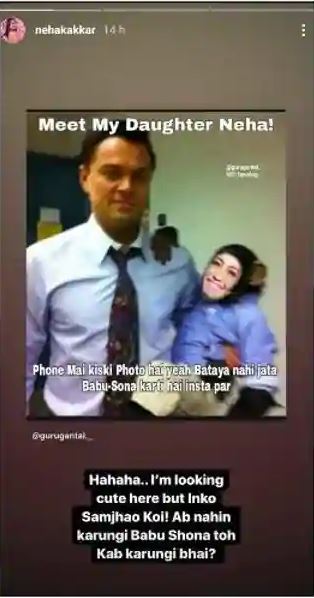 Neha also presented her opinion on the memes being made on her, asking people not to get offended and start hurling abuses. In another story, she wrote, “For all the meme accounts and their haters too. I have been seeing my memes since so long! I think today I want to say something. So.. It’s a request to the people who see memes and get offended. Plz don’t abuse these people, everybody has some job to do in life, which makes them feel complete and if making memes is their job or if making random funny memes gives them Happiness, let them be!" She also mentioned in her another story that memes are made out of famous people, so she will have to accept it. (Don't Miss: Ayushmann Khurrana Gave A Hilarious Reply To A Fan Trying To Flirt With Him Using A Pickup Line) 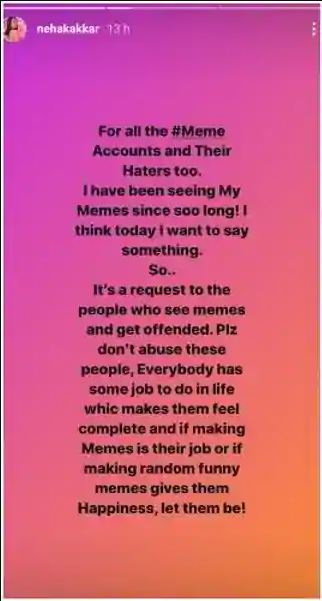 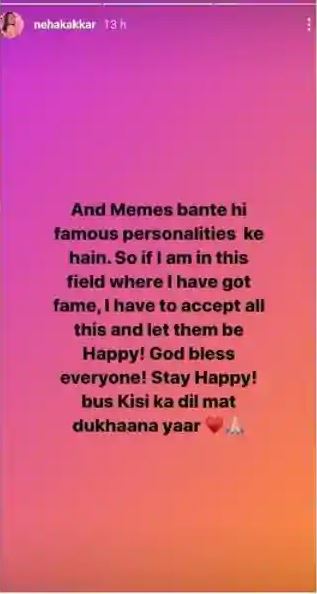 Talking about Neha and Rohanpreet’s flirting game and mushy posts, then on October 19, 2020, Rohanpreet Singh had taken to his IG handle and had shared a picture in a black kurta pyjama. Rohanpreet had looked ‘handsome’ in the picture with his chocolate boy looks and savage green turban. Rohanpreet had seemed to be practising to be a good jiju as he had chosen his saale, Tony Kakkar’s song, Kurta Pajama’s lines to caption his picture. Sharing the picture, Rohanpreet Singh had written, “Kurta Pajama Kala Kala Kala #NehuDaVyah.” While Rohanpreet Singh was busy being a good jiju, Neha Kakkar had not missed the chance to flirt with her husband-to-be by commenting on his picture. She had immediately commented on the picture as “My handsome!” (Recommended Read: Dimpy Ganguly Shares A Magical Picture With Her Kids From Their Maldives Vacation) 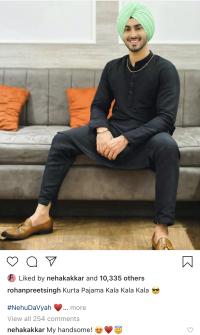 Well, what are your views about Neha’s reply to trolls? 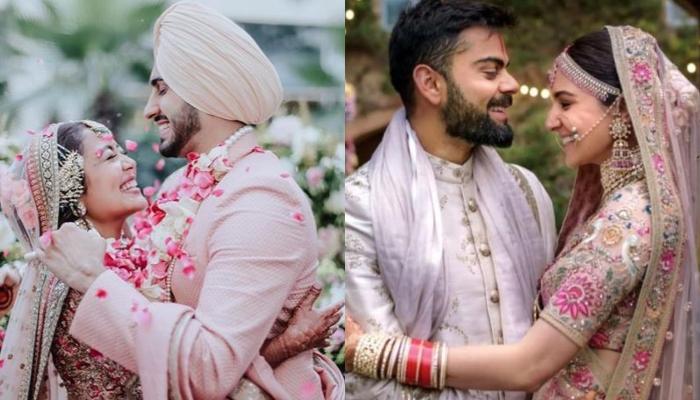 Every year, we witness our favourite celebrities entering the matrimonial bliss and when it comes to taking inspiration for our own wedding, we tend to dig in the trends they have set. While some exchange vows in low-key ceremonies, some say ‘I Do’ in the star-studded lavish functions. When it