There is a piece of advice about life that we all have heard in our twenties but understand it in our sixties and that is 'time flies too fast and it is only memories that are left to be cherished'. For parents seeing their little kids growing at a rapid pace is sometimes beautiful and sometimes sad. There are only feelings and certain unsaid emotions that hover over them for the rest of their lives. To understand it better, let’s bring one of the doting celebrity couples of the B-town in the frame, Neha Dhupia and Angad Bedi, who have been pouring their heart out on their little munchkin, Mehr Dhupia Bedi every day and we get to see the glimpse of the same on their Instagram handles. (Recommended Read: Irrfan Khan's Son Babil Posts Precious Farmhouse Moments Of Father, It's A Glimpse Of His Generosity)

This time around from the two parents, it is the doting mother, Neha Dhupia, who has posted a simple picture that includes a beautiful gesture from her daughter, Mehr Dhupia Bedi on Instagram. So, without further ado, let’s jump into the story. On May 21, 2020, Neha Dhupia took to her Instagram stories and posted a picture of her injured thumb and revealed that the cute band-aid that we are seeing on top of it is placed by her baby girl, Mehr Dhupia Bedi. Having a look at the picture, we can see all the cartoons printed on it that tells us that it is a children’s band-aid. But the sweet gesture by the baby girl is surely a special one for Neha Dhupia and she talked about it in her caption atop of the picture, which can be read as “She shares and she cares … my little doll @mehrdhupiabedi,” followed by a heart emoticon. Take a look. (Don’t Miss: Randhir Kapoor Talks About Life After His Brother, Rishi Kapoor's Demise, Admits They Miss Him Badly) 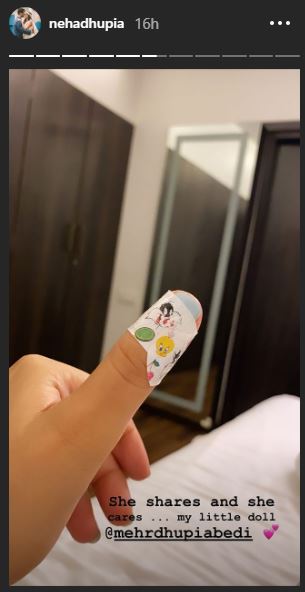 Well, Neha Dhupia has inspired a lot of working women with her commitments both in her personal and professional life. The actress had taken her baby girl to the sets of her shoots when she was too small and had also ditched some parties to spend some quality time with Mehr. Recently, Neha Dhupia’s doting husband, Angad Bedi had showered praises on his wife’s parenting and why he thinks that their baby girl is more of an extension of her mother than him. He had explained, “Neha is a brilliant mother. She has raised Mehr most passionately. I feel that Mehr is an extension of Neha more than me. Neha has put in a lot of effort from the time she has been carrying Mehr in her womb to her delivery to looking after her to taking Mehr along whenever she is shooting out. She tries to spend maximum time with her. Right now, I can see that even though Mehr is only 16- months old but the words she has picked up and the emotions, it is all because of my wife.” 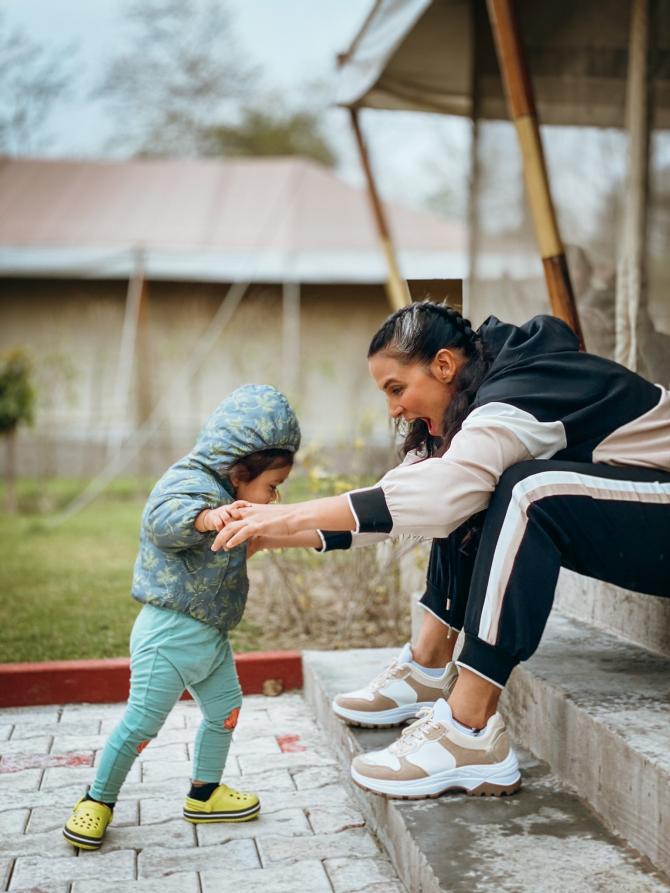 Right now, the sweet little family is spending their time together in lockdown amid coronavirus scare. In an interview with The Quint, when Neha Dhupia was asked about their family’s quarantine phase, and the actress had revealed what social distancing had made her realise, “I would always tell this to Angad and everyone around me that all you need is love. So I am just happy that I am surrounded by family. I am a working mom so concentrated time with my daughter is something that I'm enjoying every bit of.” Also, Neha had answered why her daughter, Mehr Dhupia Bedi’s nursery is her most likeable corner in the house, “The nursery in our house is my favourite corner because I get to see her and she also gets a sense of space. And she always welcomes saying ‘come come’. So she calls us in.” (Also Read: Aayush Sharma And Arpita Khan Sharma's Son, Ahil Kissing His Sister Ayat Gives Major Sibling Goals) 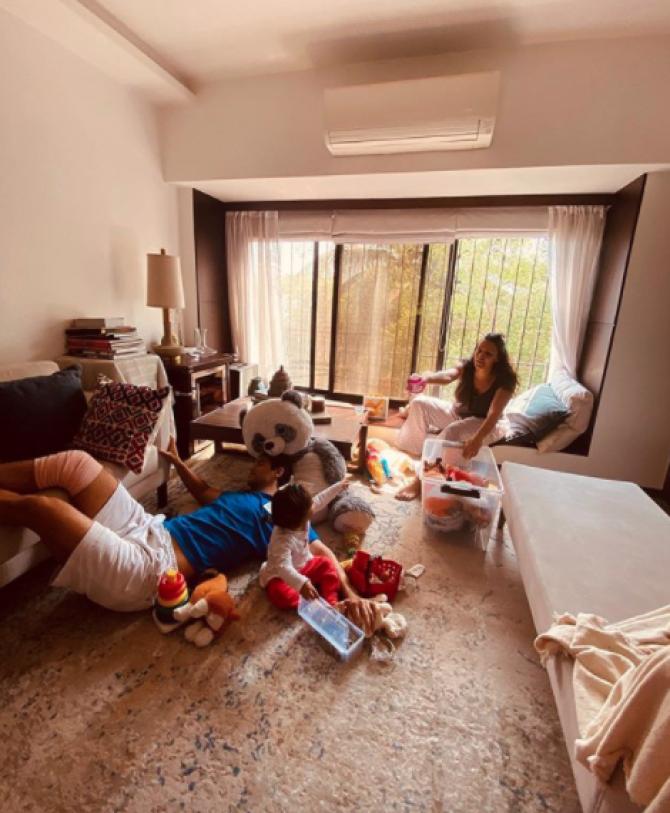 Do you find Mehr’s little gesture beautiful and adorable? Let us know! 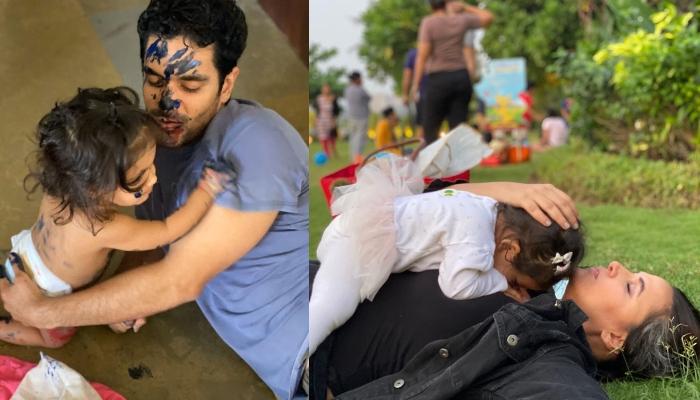 A father is a daughter's first love and a hero! From a tender age, every daughter believes that her daddy can fight any devil and it is his embrace that keeps her safe. While her mother teaches her the art of beauty, cooking and home-making, it is her father, who teaches