Neetu Kapoor remembers her late sister-in-law, Ritu Nanda on her birth anniversary by sharing an adorable picture with her. 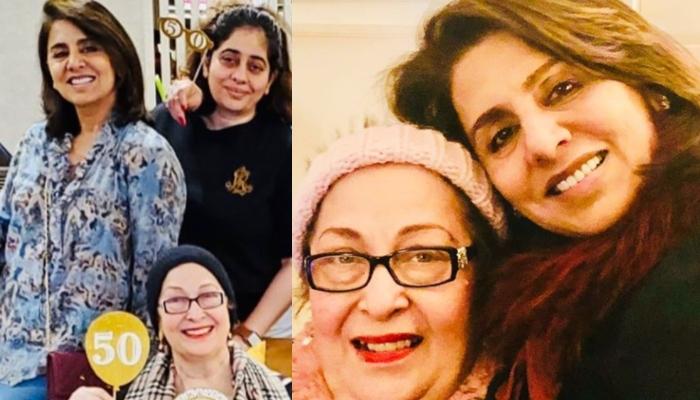 Life is quite strange as no one can predict what is going to happen the next moment. And that is the reason why some people believe in living life to the fullest as the memories we create with our loved ones are the only things to cherish in a lifetime. One such personality was Ritu Nanda, who had cherished every second of her life. It was on January 14, 2020, when she had breathed her last and had left for her heavenly abode. Ritu ji was not only a perfect daughter, wife, mother, sister, or mother-in-law, she was also an epitome of women empowerment. (Also Read: Neha Kakkar Reveals Her Wedding Outfit Was A Gift, Shares Dreamy Pictures With Hubby, Rohanpreet)

In the male-dominated world of insurance, she had proved that no work can be gender-biased and, it is pure hard work that pays off. Ritu ji, who was diagnosed with cancer in the year 2013, had taken her last breath after battling the disease for 6 long years. Amitabh Bachchan had informed the death of his samdhan, Ritu Nanda through his blog and had written, “My ‘samdhan’ Ritu Nanda, Shweta’s Mother in Law passed away suddenly at 1.15 Am... cannot communicate... travelling.” Ritu ji’s funeral had taken place at the Lodhi Road cremation ground in Delhi.

On the birth anniversary of Ritu Nanda, Neetu Kapoor remembered her sister-in-law and posted an adorable throwback picture taken last year on her birthday. Neetu took to her IG handle and shared a picture with Ritu ji, where the bhabhi and nanad hugged each other. Dressed in a green suit, Ritu ji carried her trademark smile while posing for the camera. Recalling that beautiful day spent with her, Neetu wrote, “Memories” followed by heart emoticons atop the picture. Riddhima Kapoor Sahni also shared a picture with her bua, Ritu Nanda on her IG stories with a heart emoticon atop it. Actress, Kareena Kapoor Khan also shared an adorable monochrome picture of her bua, Ritu Nanda with two heart emoticons.

After the death of Ritu Nanda, Neetu Kapoor had taken to her IG handle and had shared the sad news of her demise with a heartfelt post. She had shared a picture with her and had written, “My dearest may your soul Rest In Peace”. Ritu Nanda’s niece, Riddhima Kapoor Sahni had taken to her Instagram to mourn the death of her bua with an emotional note. Riddhima had written, "To the kindest most gentle person I‘ve ever met - They don’t make them like you anymore - RIP bua #missyoualways." (Also Read: Hardik Pandya Shares A Super Adorable Picture With His Son, Agastya, Calls Him 'The Greatest Gift')

Daughter of Raj Kapoor, Ritu Nanda was the Chairwoman and Chief Executive Officer of Ritu Nanda Insurance Services (RNIS). She was honoured with the Brand and the Best Insurance Advisor of the Decade award from the Life Insurance Corporation of India and had entered the Guinness Book of Records for selling 17,000 pension policies in a single day. Believer of spiritualty and follower of Shirdi Sai Baba, Ritu Nanda, in an interview with The Indian Express had retorted when asked why she had to go through the suffering and illness, “That is my karma. I had to. As long as He is there to hold my hand while I go through it all, I know I will be ok. For five years I had all those pre-stroke events, without even realizing. It was my God looking after me.”

When Rishi Kapoor was fighting with cancer in the US, he had acknowledged the immense support he had received from his family including wife, Neetu Kapoor, children, Riddhima Kapoor Sahni and Ranbir Kapoor and sister, Ritu Nanda. Revealing how the tough phase had brought the family together, Rishi ji had stated in an interview with the Mumbai Mirror, “Yes, all my siblings, my children and Neetu in particular, who has been like a solid rock, have been around me, supporting me through all this. Right now, my daughter and grand-daughter are with me. Ranbir keeps coming every five-six weeks. I am overjoyed by all the love and concern, the solidarity of my family. Here I have to make a special mention of my niece Natasha and my elder sister Ritu Nanda who is also here for the same reason. They were our anchors who kept Neetu and me going. When your anxiety is so high you need this kind of support and such motivational people around.” (Also Read: When Madhuri Dixit And Her Hubby, Shriram Nene Had Taken The Accent Challenge In The Lockdown Days)

Happy birthday Ritu ji, your absence is and will always felt!